I like to do a bit of Rock 'n' Roll tourism when I'm travelling, visit various music related landmarks, venues, shrines, album cover and photo locations amongst other things. It's all very well immersing yourself in musuems and galleries, I like that too, but every now and then I just want to have a break and see where Sid stabbed Nancy (allegedly...), where Dave Davies stuck a knitting needle through his amp or which ancient Neolithic burial mound Julian Cope used as a recording studio. I'm fascinated, not just by music history, but the geography too, I've gazed at the beautiful ceiling paintings of the Sistine Chapel but I've also seen the graffiti covered walls of CBGB's, no prizes for guessing  which had the most profound effect on me...!
Here's some landmarks from a couple of recent trips to Paris, if you have any similar Rock tourist tales then please send them in, I would love to feature your favourites too.
Probably first on most music fan's itinerary in Paris will be a visit to Père Lachaise Cemetery, to see Jim Morrison's grave. Sadly, the famous bust of Morrison that was once on the grave has gone, long since stolen by some over zealous fan and the grave is pretty unassuming now. Morrison died in a Paris apartment in 1971 but I still think it a bit strange that he was not buried in California as The Doors always seemed so synonymous with the place.

Père Lachaise is also where you can find the grave of the Little Sparrow, Edith Piaf. I recently saw the fantastic movie "La Vie En Rose" about her troubled upbringing and sad demise, it's well worth watching, especially for the remarkable portrayal of Piaf by Marion Cotillard. Piaf's life was remarkably bleak, abandoned by her father to live in a brothel run by her mother, she was raised by kindly prostitutes, who nursed her through terrible health problems including temporary blindness at one point. She sang for money on the streets of Pigalle and was spotted by a nightclub owner to perform in front of wealthy clients, a nightclub owner who was later to be murdered by gangsters. Piaf's life continued with a catalogue of unremitting darkness, her only daughter died of meningitis aged only 2 years old and her true love, boxer Marcel Cerdan, died in a plane crash. After being involved in a car crash herself she became addicted to pain-killers and alcohol and died from cancer at just 47. It is a remarkable story, but despite it all she grew to become one of France's most revered musical icons.


My personal quest to visit Serge Gainsbourg's grave in the Montparnasse cemetery was finally realised last month. I'd already visited his house on Rue Verneuil, which you can read a report on here, but was disappointed to find the cemetery closed. I had to go back and made sure I got my timings right this time and it was well worth the trip. Montparnasse is a beautifully kept cemetery, and it is full of graves and shrines of some serious cultural heavyweights such as Guy de Maupassant, Simone de Beauvoir, Baudelaire, Samuel Beckett and Jean-Paul Sartre. I find it quite fitting, if some might say ironic, that Serge is buried amongst such illustrious company. He has, in his own irrerevant and anarchic way, made probably just as much impact on French popular culture.


The grave is covered in interesting bits and pieces, from cigarettes, to drawings and photos and strangely enough, a full cabbage - in tribute to his concept album  "L' Homme À Tête de Chou" or The Man with the Cabbage Head.
I've already featured a previous trip to Serge's grafitti strewn house here, but it's always worth another visit to see how the daubings have changed. Still no news on the muted plans to open the place up as a museum.
Le Grand Rex is a beautiful Art deco venue built in 1931 and located on the Boulevard Poissonnière. Wilco and Noel Gallagher, amongst others, will be playing gigs here in 2012.
I'm not a huge fan of classical music, but one composer that really struck me when I was playing in my Junior School's orchestra (before that nasty Punk Rock took hold of me...) was Erik Satie. I just fell for the minimalist piano scores such as the "Gymnopedies" and "Gnossienne" pieces. You can hear his influence on music by Japan, David Sylvian, Gary Numan and Sweden's Hederos & Hellberg. Satie was actually born in the beautiful harbour town of Honfleur in Normandy (where there is now a musuem) but moved to Montmartre in the 1880's.
Abbesses, the beautiful little square at the foot of Montmartre is the inspiration, title and location of this brilliant video for a classic slice of instrumental Mod/Soul from DC Fontana. Here's a photo of the Abbesses Metro station featured in the film which you can enjoy below... 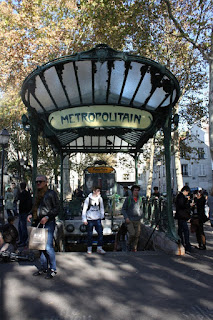 Montmartre is also the location of a famous photo-shoot of The Smiths by Paul Slattery, Paul travelled with the band in December 1984 for their gig at the Parc des Expositions. I re-traced their steps, taking in the very smart area just below the Sacre Coeur including the Rue Giradon, Rue de L'Abreuvoir and the Place des Quarte Freres Casadesus. These photos and more can be found in Paul's superb book "The Smiths, The Early Years" published by Omnibus Press.


If you have any photos of music related landmarks then please send them in and I'll include them on the Blog.
Posted by Retro Man at 16:37