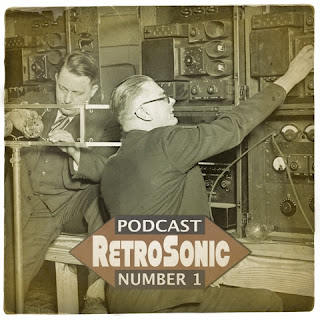 I'm pleased to announce new for 2012, the RetroSonic Podcast, which we will hopefully be turning into a monthly release. The first episode is currently in "post-production", whatever that means...and will be released very soon. I'll be joined in the Pod by Adam from The Jetsonics and we will be playing and chatting about a selection of hidden gems from the worlds of Punk Rock, New Wave, Soul, Power Pop, Psychedelia and Garage Rock. Expect album tracks, new and unsigned bands, hidden gems and classic songs. We'll also be discussing some of the Bands and Events featured in the Retro Man Blog, and there will be news and hopefully some Special Guests along the way...
Our first special feature will be part one of our interview with legendary Rock Photographer Paul Slattery who has captured many classic bands such as The Clash, Motorhead, Ramones, The Fall and Joy Division. He has also been there at the beginning with acts such as The Smiths, U2, The Stone Roses and Oasis. In this Episode Paul will be discussing his own "Early Years" and playing some choice cuts from the music that inspired him to take up Rock Photography, such as The Pirates, Dr. Feelgood and Link Wray.
Many thanks to the following for testing the Pilot Episode and supplying us with valuable feedback, and more importantly encouragement to do more of the broadcasts! We really appreciate it.
Hasse - Selander Art (Sweden), Wayne - Ice Cream Man Blog (Sweden), Kurt - The Big Nothing (Tokyo), Francis B-W (U.K.), Mike A (New York), Susan - Jim Morrison's Paris web-site (Paris), Steve - Angels In Exile Records (U.K.), Phil - Stuff & Nonsense  Blog (U.K.), Carolyn - A Drake's Progress Blog (U.K.), Push - Author and Pushblog (U.K.), Del - The Godfathers (U.K.), Steve - The Len Price 3 (U.K.), Geoff - Kast Off Kinks web-site (U.K.), Roger - Tenek (U.K.), Ola - Fula Fula Ord Blog (Sweden), Jim E (U.K.)
The Pilot Episode featured us discussing a selection of 12 songs that included The Rezillos, The Past Tense, Shonen Knife, The Len Price 3, The Ruts, The Soundtrack of Our Lives and Radio Birdman amongst others.
The Pilot was very a work in progress, but if you would like a copy then please email us and we will send you an MP3 version. It's worth it for the great music alone! We have also set up a little Message Board/Forum called RetroBoard where you can register to comment on anything featured on the Retro Man Blog and RetroSonic Podcast.
Contact us about the Podcast here retrosonicpodcast@gmail.com
Posted by Retro Man at 17:31