TV Smith live at The Railway, Southend on June 22nd 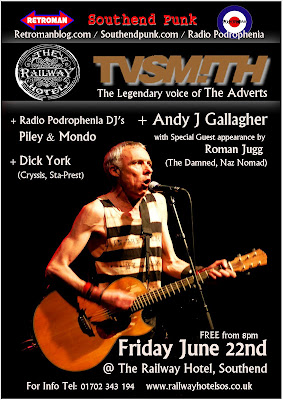 Following the success of our recent Len Price 3 gig, I'm pleased to announce Retro Man Blog will again link up with Radio Podrophenia at Southend's superb music Pub and Venue, The Railway Hotel. This time we are being helped out with promotions by Steve Pegrum's amazing archive web-site, Southend Punk. The gig will take place on Friday June 22nd and we are extremely proud to announce that the headliner will be TV Smith, the legendary voice of The Adverts. Expect to hear a selection of songs from his impressive back catalogue including the excellent new album "Coming In To Land" and hopefully a few Adverts goodies thrown in too.

Special guests include Andy J Gallagher who will be playing tracks from his latest release "Helicopter Dolphin Submarine". The album was produced by Roman Jugg of The Damned and Naz Nomad fame, and we are very pleased to say that Roman will be joining Andy on a couple of numbers. Kicking off the night will be Dick York from Cryssis and Sta Prest performing a solo acoustic set. Then to round things off we will be treated to another storming DJ set from Radio Podrophenia's Mondo & Piley.

If that wasn't enough, The Railway have generously declared this a FREE gig! The only thing we ask of you is that you arrive early to support all the acts - and more importantly to ensure you do get in - oh yeah, and buy lots of beers, it's the least you can do...!!

For Part 2 of our "Punk Rock Legends" gigs we move to The Half Moon in Putney, London, the following week on Saturday June 30th. Headliners will be The Members, the original "Sound of The Suburbs", now including Rat Scabies from The Damned, on drums. Support comes from the excellent Monica and The Explosion, featuring original U.K. Subs bassist, Paul Slack and they are joined by The Jetsonics. For tickets and info check the Half Moon web-site HERE. 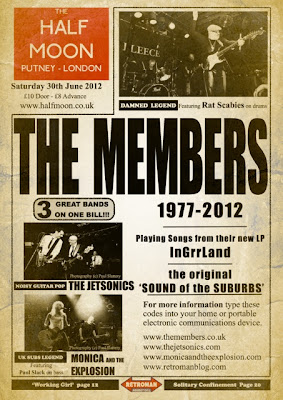 In the run up to the gig I'll be doing separate features on all the Artists appearing and hopefully a special edition of the Retrosonic Podcast too, so keep a look out here on the Blog or Facebook page for news.