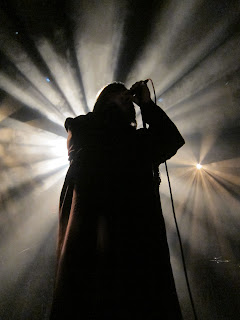 ...(continued)...Suddenly Martin appears at the side of the stage, makes his way round behind drummer Fredrik Sandsten and takes his place behind the keyboards. It's business as usual, the band relax and off we go. A 5pm start is probably not the ideal time for The Soundtrack of Our Lives full-on Rock & Roll juggernaut of a performance. In fact I was expecting one of their successful acoustic sets, especially as this has been a very civilised weekend held in the beautiful setting of La Gaîté Lyrique, an old theatre now converted into a venue and exhibition hall. But no, although Ebbot brandishes an acoustic guitar for the first few lines of opening number "Throw It To The Universe", it's discarded pretty quickly and there followed a blistering set that plundered their extensive back catalogue. They took the rather laid back Sunday afternoon crowd by the scruff of the neck and shook them out of their slumber. On the new album, "Throw It To The Universe", the title track and tonight's opening number, is on the surface a self referencing number full of bravado, but there is a twist as the realisation dawns on you that this is actually a "say hello to say goodbye" message as the band have announced they will split at the end of this year. It also cleverly incorporates the riff to early single "Firmament Vacation" as it fades out and they repeat the trick tonight seguing into their classic anthem. "Firmament" was their original statement of intent, a line in the lyrics gave the band their name and it fits in well with the theme of "Throw It To The Universe". 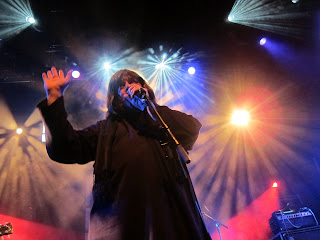 Next up is "Where's The Rock?" (ironically retitled "Where's The Hits?" on the set-list), starting off with a flamenco style riff then it's into the wonderful "Still Aging", from the band's breakthrough 2001 album "Behind The Music". "When We Fall", carries a hint of melancholy and after the show I notice that it has also been  re-named on the set-list, this time as "When We Fail". It's a bit disheartening, sure the band are being playful, but when you take in the songs' lyrics, with lines such as, "somebody told me we're like strings in a chord made to carry on, with the same old song", you wonder if they have just got disillusioned with the music scene and just want to finish it all before things get too stale. The melancholic mood is quickly shattered though as the huge riffs from raucous "should-have-been-number-One-single-around-the-world "Big Time", ring out around the venue. 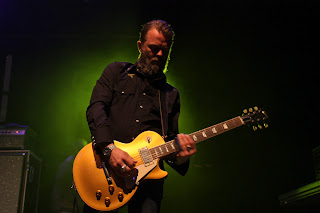 That's followed by the shimmering "Freeride" and then the fan favourite "Galaxy Gramophone" with it's powerful psyched-out landscapes. "Grand Canaria", from debut album "Welcome To The Infant Freebase", proves that Fredrik Sandsten, is without doubt the best drummer in contemporary rock music. I sincerely hope that Fredrik can find a vehicle for his extraordinary drumming skills after Soundtrack call it a day. Sweden's unofficial national anthem is next, "Instant Repeater '99" then "Speed Of Light" which is in turn followed by the complex "Second Life Replay" from the double album "Communion". Probably their most well known single, "Sister Surround" ramps up the atmosphere even further and they close the set with the warm glow of "What's Your Story?". The band are called back for an encore and they storm through a superb version of "Mantra Slider". 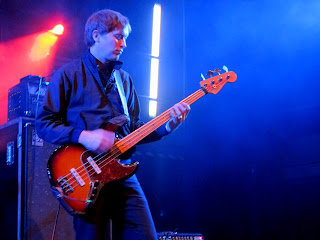 Then it's all over, and I think sadly that this could be one of the last times I get to see the band in all its thrilling and vibrant live glory. But there are still six months to go, and maybe a chance to catch just one more fix of the greatest live band I have ever seen. Talking to the band after, it seems they are enjoying the recent gigs, guitarist Ian Person told me that the show in Copenhagen the night before was one of their best, that Ebbot reverted back to his wild and crazy Union Carbide Productions days and the gig was packed and steaming hot. Maybe the pressure is off a bit following their decision to call it a day and they can just enjoy each show as it comes. The impending split is sad news of course, but then if they end on a high with a great new album and the door being left slightly ajar to the hope of future collaborations, then that can only be a positive thing. In fact watching Martin over the weekend with his superb display of orchestral and acoustic arrangements, and playing, not only with Soundtrack, but Marie Mondiano and Peter von Poehl too, you are reminded that Soundtrack were always a band full of six extremely talented individuals. 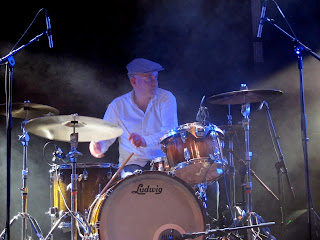 Not only that, but Hederos is now also working with the Jazz super-group Tonbruket and has an impressive body of work with collaborative side-projects such as Hederos & Hellberg, with Mattias Hellberg, and also with Nina Ramsby. Mattias, as we saw the day before, has his new band Free Fall, and has already worked on the soundtrack of the Swedish TV series "Upp Till Kamp". Maybe a parting of the ways was inevitable, if only to free up some time for all this outpouring of individual ideas and talent. There's more - Ian Person has already released an excellent solo album as Diamonds In The Rough, and then there was his stunning soundtrack work on the IFK Gothenburg documentary movie, "Fotbollens Sista Proletärer" (you can read an interview with Ian about this on the Blog here). Kalle has his work as a Producer and running the Svenska Grammofon Studion. Ebbot is also much in demand as a Producer as well as running his own Club Revolution No. 9 in Särö outside Gothenburg. 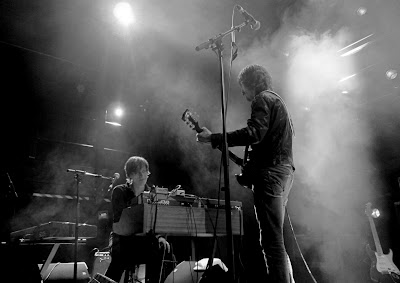 Ebbot will also release his own solo album "There's Only One Of Us Here" on Kning Disk Records on June 06th. So, although The Soundtrack of Our Lives may end there will be plenty of exciting twists and turns to follow with each band member in the future. 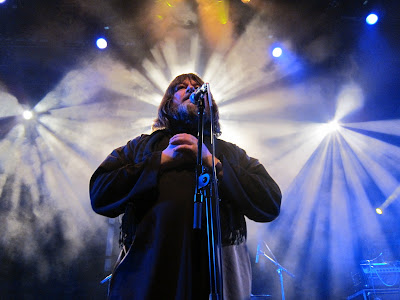 All photos copyright Steve Worrall 2012.
You can see more photos of the gig by "Liking" the Retro Man Blog Facebook page.
Posted by Retro Man at 21:36