Great news...the U.K. Subs immense historical archive web-site "Time & Matter", run with admirable dedication by Mark Chadderton & Rob Cook, is now back up on line following it's re-launch today! It has beaten the unbelievable act of mindless hacking from some extremely sad Internet nerd, and is now back and running at full steam! Any fan of any band would crave a site like this, it really is a huge and impressive labour of love, so it's more reason to be thankful that Mark & Paul could recover their work. "Time & Matter" features a wealth of excellent archive material and memorabilia, ranging from photos, press releases and old fanzine features to a full discography and up to date news on the band and it's various ex-members and off-shoots. Anyway, best of luck to Mark and Rob.


Whilst the site was down, original Subs' bassist Paul Slack, now with Monica & The Explosion, moved his fantastic Tour Blog/Travelogue to a different site. You can catch up with Paul and Monica's adventures on the new "Access All Areas" Blog. Paul said when he was on tour back in the day, he went to some amazing places but it was just venue/backstage/tour bus/venue...but now he really wants to savour and experience the various places he plays (and eats...!) at. He writes and photographs very well, and I recommend his Blog whether you like Food, Travel, or Music...or all three for that matter...it is a thoroughly entertaining read!
You can see Paul Slack in action with Monica & The Explosion at The Half Moon, Putney on June 30th as Part 2 of Retro Man Blog's "Punk Legends" nights. Also on the bill will be the original "Sound of The Suburbs" - The Members - with Rat Scabies from The Damned on drums. Part 1 will be at The Railway in Southend-on-Sea on June 22nd with TV Smith from The Adverts, Andy J Gallagher with Roman Jugg (The Damned, Naz Nomad) and Dick York (Cryssis). 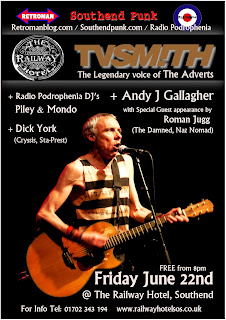