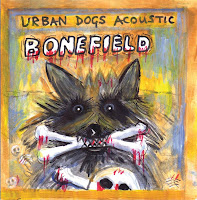 Back in November last year, at Gaye Advert's excellent "Punk & Beyond" Art Exhibition, I watched Charlie Harper from the UK Subs and Knox, the ex-Vibrators front-man, play a rousing Acoustic Set to a packed out Signal gallery.  Little did I realise back then that this interesting concept would later materialise as the superb new album entitled "Bonefield".  So, back together as The Urban Dogs, this brand new release features a mix of new songs, cover versions and old UK Subs, Vibrators and Urban Dogs classics.  Recorded over a two year period, Charlie jokes that it's a "...bare bones production", but one that betrays a lightness of touch and intricate musicianship that shines through on this selection of classic material.


The CD features a cover painting by Knox himself, and Charlie Harper adds exclusive liner notes on each of the album's songs in the 8 page full colour booklet. Retro Man Blog contributor and world famous Rock Photographer, Paul Slattery, also has lots of excellent pictures of Knox and Charlie included in the booklet. This is especially pleasing, as Paul took many of the UK Subs very early photographs, including the individual portraits of the band that can be seen on the back of the iconic "Warhead" single cover. One of Paul's classic early live photos was also used on the mammoth 1996 Double CD 46-track compilation "Original Punks Original Hits".

Talking of "Warhead", that's the track that kicks off "Bonefield", and at first it's pretty strange not to hear Paul Slack's iconic bass-line. However, it's very refreshing to hear their acoustic version of a familiar and much-loved classic. This works extremeley well throughout with their takes of their own back-catalogue. For example The Urban Dogs' "New Barbarians", The Vibrators' "Dragnet" and the Subs' "Tomorrow's Girls", which Charlie admits in his liner notes was originally written and played acoustically. There are superb covers of Arlo Guthrie's "Hobo Lullaby", Hank Williams "Move It On Over" and The Reverend Gary Davies' "Cocaine" along with Gershwin's American classic, "Summertime". The protest songs, "War Baby" and "Not In My Name", which was written during the recording of the album, add a air of gravitas to the material with their strong Anti-War sentiments. But overall there is an uplifting and positive theme throughout "Bonefield", which you don't often find on acoustic albums. Not forgetting the nice sense of humour too, which is apparent on Knox's spoken word "Swamp Dog Blues", on which bass and drums make an appearance to drive along a potted history of the duo, from the Queen's Coronation in 1953, when "Charlie and Knox are still wearing short trousers", to the beginning of the Punk Rock explosion. Along the way, we learn that at Xmas 1959 Knox had a choice between a guitar or a crossbow, and well, the rest is history! So, an excellent album indeed, and I can thoroughly recommended "Bonefield". Considering they pull this off using acoustic guitars, with only the odd burst of harmonica and electric guitar, drums and bass here and there, it's testament to their song-writing and respect and feel for the songs they chose to cover.

It's also great to see that the album has been released on Time & Matter Records, which is an offspring of the immense UK Subs official archive web-site, Time & Matter. In fact, the web-site was almost destroyed by a computer virus, but luckily Mark Chadderton, Rob Cook and their team, managed to salvage the archive and it is thankfully back on-line and certainly well worth checking out. I'm sure any fan of the UK Subs will find it a remarkable collection of memorabilia, reviews, photos, news and there are even Blogs and Tour Diaries by current and ex-members of the band. In fact it should be held up as the benchmark for all band's web-sites in general, a labour of love run by real fans for other fans. 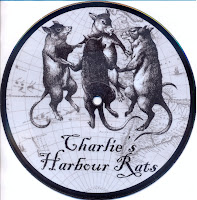 Charlie also has another acoustic side-project called "Charlie's Harbour Rats". This is a folky line-up featuring original UK Subs Drummer, Pete Davies, who always sticks in my mind for his brightly dyed hair on those early Subs' Top Of The Pops appearances back in my youth. They've released a single on Punkerama Records, available as limited edition Vinyl Picture Disc only, featuring "Rollin' In My Sweet Baby's Arms" and "The Cuckoo". The full line-up of the band is Charlie on vocals and acoustic guitar, Pete Davies on drums and vocals, Sally Hunter on violin, Bernie Elliott on mandolin, Chris Tombs on upright bass and Jewls Ashton on pennywhistle. The single may have sold out already, but keep and eye-out for more news.
Posted by Retro Man at 15:20