Retrosonic Podcast Special Edition: Ian Person of The Soundtrack of Our Lives 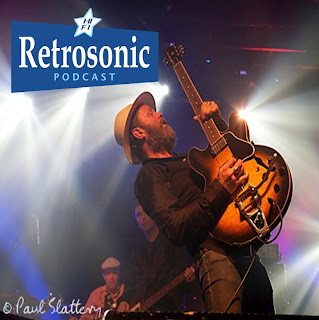 I am very pleased to announce that our special guest for the latest Retrosonic Podcast is none other than The Soundtrack of Our Lives' guitarist and song-writer, Ian Person. Ian originally played alongside vocalist Ebbot Lundberg in the legendary and influential Swedish Stooges-style punk band Union Carbide Productions and later joined Ebbot in forming The Soundtrack of Our Lives. I spoke to Ian just prior to the band's last ever show at the beautiful Slussens Pensionat on Orust. In this Podcast, we concentrate on Ian's solo, movie and TV soundtrack work and his future once the band sadly call it a day at the end of this year.  The Podcast features some brand new, unreleased solo songs along with a cut from his superb "Diamonds In The Rough" album and soundtrack music from the excellent IFK Gothenburg documentary movie "Fotbollens Sista Proletärer" ("Football's Last Proletarians"). The movie was produced by Kalle Gustafsson Jerneholm, bassist in The Soundtrack of Our Lives, and it will have it's first U.K. screening at The Everyman Cinema Baker Street in London on Monday October 01st. Hopefully one of the stars of the film, ex-IFK and Liverpool defender, Glenn Hysén, will be in attendance together with the film's Director for a Q&A session at the screening. You can read more about the background to the film in our previous Retro Man Blog feature here, which includes a track-by-track Guide by Ian himself, to his music in the movie.

Next up Ian Person will play a solo "unplugged" Acoustic show at Restaurant 2112, which is located at number 5 Magasinsgatan in Gothenburg on this coming Saturday, September 29th.

Here's the link to the Podcast, I hope you enjoy it and please don't forget to keep a check on the Blog for news on Ian Person's solo album and for information on future solo live shows too.

Thanks to Paul Slattery for the Podcast cover and to Per Kristiansson for the Black & White photo.