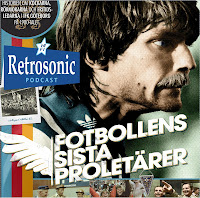 The superb documentary movie about IFK Gothenburg entitled,  "Football's Last Proletarians" (Fotbollens Sista Proletärer), had it's very first London screening as part of the "Kicking & Screening" event, at the Everyman Cinema Baker Street recently. After their busy day talking to Sky Sports and Talksport Radio, Retro Man Blog got the very pleasant opportunity to relax and have a couple of beers with Directors, Martin Jönsson and Carl Pontus Hjorthén along with one of the stars of the team, and of course the movie itself, ex-IFK, Liverpool and Fiorentina defender, Glenn Hysén. The movie is a fascinating look back at IFK Gothenburg's 1980's European adventures under the management of Sven-Göran Eriksson. However, it is far more than just a film about football, it's a classic and extremely well told story of David against Goliath - how a team of part-time footballers took on, and beat, some of European football's top outfits on their way to UEFA Cup success.  The movie also puts the football into historical and social context, as we see how the politics of the time, along with the atmosphere of the working class dock city of Gothenburg, helped to shape such an unlikely yet successful team.

I would go so far as to say this is the best film to be made about football so far, as the highs, lows and crushing sense of injustice that permeate the movie, are familiar to every die-hard football fan, no matter where they are from or what team they happen to support.  The original soundtrack music is provided by Ian Person, long time IFK fan and guitarist with The Soundtrack of Our Lives. Ian spoke to me about how he got involved with the movie on our Special Edition Retrosonic Podcast, which you can listen to and download here. You can also read the previous Blog feature on the movie, with an interview with Ian and a track-by-track guide to to the movie soundtrack here. 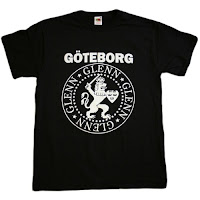 However, in this Episode of Retrosonic Podcast, Martin and Carl Pontus tell us how they got the idea for the movie and how they believe that it will hopefully appeal to British and Scottish football fans in particular. They discuss the importance of the social and political times in Gothenburg around the team and how they got to work with Ian Person from The Soundtrack of Our Lives for the film's music. Glenn discusses some of the unsung heroes of the team and what it was like working under the management of Sven-Göran Eriksson and he then talks about his time with Liverpool FC and Fiorentina. I also finally uncover the mystery of the ubiquitous Ramones style "Glenn" T-shirts that you see all over the city...

With many thanks indeed to Martin Jönsson, Carl Pontus Hjorthén and Glenn Hysén for sparing time from their busy schedule to chat to me and for their generosity...my turn to get the beers! Many thanks also to Ian Person from The Soundtrack of Our Lives. The English version DVD is available soon from all major outlets and is thoroughly recommended.