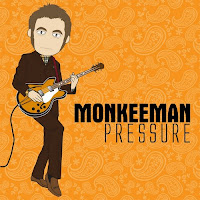 Monkeeman, the melodic guitar band fronted by German Singer/Songwriter Ralf Luebke,  have just released their brand new five song E.P. entitled "Pressure" which features great cover artwork by Maggie Mattioni from Mod designers Peggy Jane. The band have released three albums to date, all to critical acclaim in the German press. The first single “Universe” became a massive radio hit on German Radio. Ralf Luebke, the brainchild behind the band, felt it was time to get Monkeeman back on track and so after a three year hiatus he set about the process of recruiting a new line up for the band. In a very audacious move, Ralf decided that he wanted to branch out into the UK & Ireland. By June 2012 he had found the new line-up in Belfast in the form of Marty Connolly (former Rainbow Corner on Bass); Marty Kerr (former Back Issues Guitarist) and Marty Malone (former drummer with psychedelic outfit The Vals). The guys finally hooked up on August 7th 2012 in Belfast City Centre (hometown of the 3 Marty’s) for a solid two week rehearsal schedule. During this period, the band gelled very well indeed, playing some of the bands old tunes but also working on new songs for the "Pressure" E.P. In October/November 2012 the Belfast boys travelled to Germany to record the new E.P. in Berlin with Patrik Majer, one of Germany’s top producers. The major accomplishment from this recording session in Freudenhaus studio was that all of the 5 tracks recorded were “live” takes, capturing the retro sound of the band and proving what an excellent live act the band truly is. The band also played an electrifying sell-out gig in Wilhelmshaven’s Kling Klang venue.

The E.P.'s five tracks are a masterclass in hook laden guitar pop, full of catchy riffs and melodies. It starts off with a slight change in direction for the band, as the title track "Pressure" bursts out of the speakers with an angular Gang of Four style guitar motif, it drops out to a brief dub bass line before a thudding disco beat heralds the song's great chorus. It must rank up there with the best of Monkeeman's impressive back catalogue. "Pretty Fool" flows nicely and again uses a twisted guitar riff and powerful drumming - a kind of companion piece to "Pressure". "If The Music Was Over" slows the pace with it's moving plea of a chorus, it's a beautiful track. Although Monkeeman have in the past been labelled as a "Mod" band, I've always found their music to have more in common with the classic Power Pop bands such as Big Star and The Posies, with their chiming chords and timeless melodies. However, the band move easily between genres, for example "The Great Escape" crashes along at pace, reminiscent of The Replacements or The Long Ryders in their prime and I think Teenage Fanclub would have been proud to have penned the E.P.'s last track "Alright For Now". So it's a thoroughly satisfying record, the five tracks are bursting with great quality song-writing and the live feel of the recording gives it a raw and energetic sound that is totally infectious.

The "Pressure" E.P. will be available on general release from March 29th on iTunes, Amazon and all good online stores.

Monkeeman will play a gig to mark the launch of the "Pressure" E.P. tomorrow April 01st at Auntie Annie's in Belfast, so if you're in the area then be sure to check them out. The band Monkeeman have also confirmed two gigs at the International Pop Overthrow Festival in Liverpool at the Cavern Club at the 18th and 19th of May. Check the band's Monkeeman official web-site for all the details. 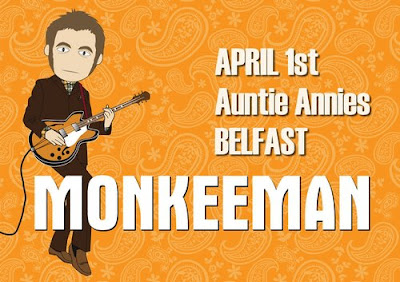 With Thanks to Ralf Luebke.