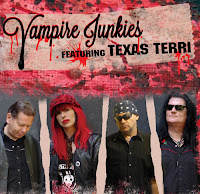 Vampire Junkies featuring Texas Terri are a London based Punk Rock & Roll band. The line-up consists of Texas Terri Laird (Texas Terri Bomb!, Scabies/James) on vocals, Kevin de Groot on guitars, Stephen Reddihough on bass and drummer Steve Pegrum from  The Machines. The band have quite a history of past associations and wanted to put together a new outfit that exemplified the best elements of the artists they loved, such as Iggy Pop, Stiv Bators, New York Dolls, The Ramones, Social Distortion, all combined with their own sound and style to play new, fresh and pure blitzkrieg Rock 'n' Roll.


Steve Pegrum approached Texas Terri at a Walter Lure (Johnny Thunders & The Heartbreakers) gig in London with the intention of joining forces, and the band set about recording the songs contained on their debut release. Texas Terri hails from Austin, Texas and has often been compared to the female Iggy Pop, Lux Interior, as well as Wendy O'Williams, Joan Jett and has Rock 'n' Roll running through her veins. She's worked with a variety of artists, and her 2004 Texas Terri Bomb album "Your Lips", was produced by Jack Douglas (Aerosmith, John Lennon, Patti Smith etc.) and featured guests such as Wayne Kramer (MC5), Cherie Currie (The Runaways) and Ryan Roxie (Alice Cooper). Most recently she played several shows in the UK and Europe with Rat Scabies and Brian James of The Damned. You can check out our Retro Man Blog report, including exclusive Paul Slattery photos, of a blistering show she performed with Scabies/James at Westbourne Park's Retro Bar here. Texas Terri has also appeared in several films including "Prey For Rock 'n' Roll" starring Gina Gershon and Drea de Matteo.
﻿﻿﻿

The brand new self-titled E.P. is a snarling blast of down and dirty, street tough Rock & Roll. It features five storming original compositions with song titles including "With My Machines", "Mainline", "Rocket Red", "Denmark Street" and "Tokyo Rubber". The E.P. is released on Steve Pegrum's own Angels In Exile Records and can be ordered from there or the band's official web-site. It features an excellent booklet designed by Sophie Lo, who has previously designed some superb posters for our Retro Man gigs and for The Len Price 3 too. Of course we thoroughly recommend Sophie Lo's amazing Rock 'n' Roll designs - her posters, postcards, album cover and booklet artwork are well worth checking out. In fact, you can start off your Sophie Lo collection by getting hold of a copy of the latest issue of Vive Le Rock magazine as it comes with two free Sophie Lo posters of Adam Ant and Johnny Thunders. 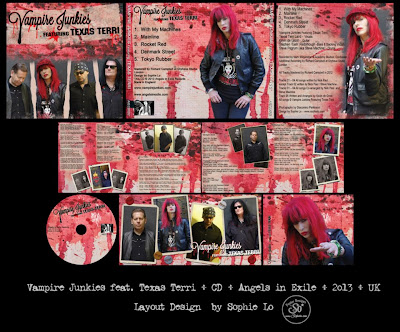 Steve Pegrum is not only the boss of Angels In Exile Records, but he is also the drummer in The Machines, one of Southend's earliest Punk Rock groups, who played at the Roxy and Vortex. You can read more about The Machines history in our previous Retro Man feature here. Steve also runs the excellent web-site archive Southend Punk, as well as helping as a joint promoter for our Retro Man Blog/ Podrophenia/ Southend Punk special gigs for TV Smith at The Railway Hotel in Southend.

Here's a great Paul Slattery shot of Texas Terri at the Retro Bar with Scabies/James:

Here's the video to one of the tracks on the E.P. entitled, "Denmark Street".

At the moment there doesn't seem to be any live dates in the pipeline, but I certainly hope they can get some shows sorted out soon, as I am sure they would be an amazing live band.


With many thanks to Steve Pegrum and Paul Slattery.
Posted by Retro Man at 14:07