Although we do pull his leg and joke about his "legendary" status, I have to admit that my good friend, Retro Man Blog colleague and co-presenter of Retrosonic Podcast, the Photographer Paul Slattery really is, when all's said and done, a bit of a legend! A lot of the praise and positive comments I receive about the Blog are directed towards Paul's photos and we are indeed very lucky to have him on board. Not just for his brand new photos, but of course for his amazing archive that we can plunder to add a bit of contrast and to prove that even 30 years later, some bands and artists are still out there rockin' as hard as they ever did. Take for example Charlie Harper, we went along to see Charlie play an acoustic set at Gaye Advert's "Punk and Beyond" Art Exhibition, Paul took the cover photos for the U.K. Subs very first 7" singles and Charlie invited us to the U.K. Subs gig later that evening. It had been over 30 years since Paul had last seen Charlie or the Subs, and yet they still put on an amazing show full of power, energy and vitality. Through the Blog, Paul has got back in touch and met up with some of his earliest "subjects" such as Gaye Advert, TV Smith, Rob Symmons of Subway Sect, Fay and Eugene from The Rezillos and Paul Slack and Alvin Gibbs from the U.K. Subs. Paul has contributed rare early photos including Wilko Johnson and Dr. Feelgood, Felt, The Fall, The Undertones, Protex and The Adverts amongst others to the Blog, so please feel free to have a browse around and check them out. However, it's not all nostalgia with Paul, he's far more interested in what's going on now rather than looking back, and he's still as enthused about raw Rock 'n' Roll as he was when he first saw Wilko Johnson and Dr. Feelgood on the Naughty Rhythms tour back in 1974. It means that bands such as The Len Price 3, The Fallen Leaves, The Past Tense, The SuperMinx'70, The Jetsonics and others, may just get him popping up at the front of the stage one night.

Paul was inspired by seeing Dr. Feelgood on the Naughty Rhythms Tour, not only by the impressive visual impact of Wilko Johnson and Lee Brilleaux but by Wilko's take on the guitar style of The Pirates' Mick Green, one of Paul's musical heroes. Just missing out on the very first stirrings of Punk Rock in London due to a stint in America working on the fishing boats of Cape Cod, he returned and became immersed in the scene, getting his first taste of this new musical and visual revolution down the front of a gig by The Adverts. He soon got work on the weekly music paper Sounds, where he was amongst the very first to photograph bands such as Joy Division, The Fall, Motorhead, U2 and he began his very close relationship with The Clash. Paul was at the side of the stage at the Ramones gig at the Rainbow that became immortalised on the live album "It's Alive" and was also on stage with the Sex Pistols at Brunel University, where he has just discovered he inadvertently took a photo of a young Billy Childish in the crowd. Little did Paul know that he would, one day be working closely with Billy as he became an established musician, author and artist in his own right. Paul and Ian from Damaged Goods Records talk about Billy Childish, Thee Headcoats and Thee Headcoatees in Part 1 of our Damaged Goods Special Retrosonic Podcast.

Paul then went on to work with The Smiths, taking some of their very first and most iconic photos, including the inner sleeve of the "Hatful Of Hollow" album. His first book was a marvellous collection of these early images "The Smiths: The Early Years" published by Omnibus Press. He then went on to work with two more of Manchester's biggest bands, The Stone Roses and Oasis. Last year saw his involvement in the big Stone Roses "Third Coming" exhibition at Whiteley's in London in conjunction with fellow photographers Ian Tilton and Kevin Cummins. Paul's second book "Oasis: A Year On The Road" was also published by Omnibus and included great shots of the band's very first tour of Japan. He took some of the first photos of the Manic Street Preachers, but slowly got disillusioned by the music business and the music scene, giving it up to travel across Tibet and China to photograph the Three Gorges area of the Yangzi River. But now re-energized by the great live music scene and the diversity and energy of some great young (and old...) bands, Paul is back where he thrives, down at the front of the stage with camera in hand, and my Blog is all the better for it...

Paul's photographs have been used in over one hundred books, on numerous album, single and CD covers and in countless magazines and newspapers. He has had various exhibitions of his Photos and given a lecture at the British Music Experience at the O2. Most recently Paul was approached by Paul Simonon of The Clash to contribute photographs, including the cover to a new copy of the "Armagideon Times" fanzine which will be included in the brand new reissue/remasters box-set "Sound System", due to be released in September this year. When he's not relaxing photographing the British landscape or supporting his beloved Brentford FC, Paul can mostly be found playing air-guitar at The Fallen Leaves gigs... 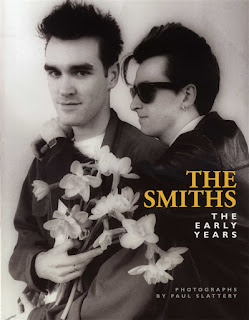 You can see a great slideshow of some of Paul's classic images here, and Paul's books "The Smiths: The Early Years" and "Oasis: A Year On The Road" can be purchased from Amazon or from any decent bookshop.You can hear Paul talking about his early experiences and playing some of his favourite songs and influences, in these special episodes of Retrosonic Podcast. In  "Part 1: Pub Rock and Pre-Punk" Paul talks about Dr. Feelgood, The Flamin' Groovies, Mick Green and The Pirates and Link Wray.

In "Part 2: The Punk Years", Paul talks to Steve from Retro Man Bog and Adam from The Jetsonics about The Ramones at the Rainbow, being on stage with the Sex Pistols, The Adverts, avoiding Richard Jobson's flailing limbs, Penetration, The Runaways, Elvis Costello, U.K. Subs, Johnny Thunders, Charlie Harper and the U.K. Subs 30 years later and being led astray by Lemmy...but more importantly, find out which Punk Rock band bought Adam chips! All this and more...