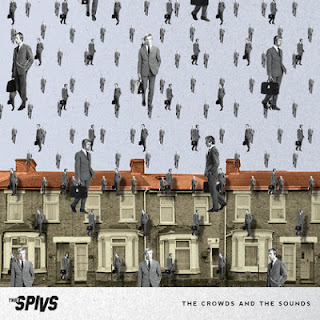 Today sees the release of Thee Spivs brand new album "The Crowd and The Sounds" on Damaged Goods Records, and to mark the day we are extremely pleased to have an exclusive track-by-track guide to the new songs, by the band's Singer/Guitarist and Song-writer, Ben Edge. We will be hosting the official album launch party at The Half Moon Putney on June 29th, along with Damaged Goods, and we look forward to seeing you there. Now over to Ben...

"The album begins with a piano intro, which is taken from the track "Back To The Start" from our last album. The idea behind this was to begin where we had left off. Me and Ed Deegan (who recorded and produced "Black and White Memories" as well as "The Crowds and the Sounds") discussed the idea and Ed ended up taking the idea much further and in my opinion made it become an integral part of the album. As you will find out in this track-by-track guide there are the recurring themes of weather, work, art and escapism which are all evident in the cover design and as Ed said “To me, if there was a theme tune for the cover Art the intro would be it."

1) "Social Network"
Once the intro plays out the album immediately kicks in with "Social Network". The song’s pretty self-explanatory really. It’s commenting on facebook and other popular social media sights and the void it fills in people’s lives. There are sides of people you would never of known about but now on facebook all of sudden you see what they eat, where they go out, their political views and much more. Despite all this it’s a very selective view of someone. Their showing you how they want to be seen although this still can be very revealing I cant help but feel that it’s a false projection of a person. It can get pretty annoying but where all guilty of it to some degree so as a song it’s as much self critical as it criticizing other people.

2) "Forget It"
This song is about the reality of everyday existence for most people. You get up you go to work and you battle to get there amongst all the other people who are on the way to work. People become like obstacles. The song starts with just my voice and guitar and builds up in to a frenzy that we hoped would have the same feel as when you head out into the madness amongst the commuters. The song also is about the importance of day dreams/escapism and not letting other people get you down. A feel good number, or at least it’s meant to be!

3) "Outside Myself"
This follows on from "Forget It" which covers getting to and from work whereas outside myself is about when your actually there. It celebrates the fact that no matter how dull things can get you yourself have the power to change it.

4) "The Crowds and the Sounds"
As you know this song is the title track and is actually my personal favourite song on the album. The idea behind the song came from walking along the Southbank (an area that inspired many themes of the album), which is one of my favourite walks in London. So I just went about trying to write a song about strolling along the Thames and feeling alone even though you’re in the middle of a huge crowd. This idea became the main theme of the album and inspired the artwork too. We also had Spencer Evoy of MFC Chicken add some saxophone to the track, which really added to the song.

5) "Straight out of Art School"
"Straight out of Art School" is an autobiographical song about my experiences after finishing art school and having to rejoin the real world whilst still wishing to be in art school. The idea of referencing another artists is common amongst artists and this was what first inspired the idea of referencing a Magritte painting for the cover art.

6) "Weathered Men"
This is about the older generation and how much the world has changed during their life times. The song is also a story about all the old people I see wandering up and down Camden Road (where I live) on a daily basis and imagining the different lives they have lived and the things they have seen just by looking at there faces. This song we struggled with initially in the studio and ended up stripping it back and approaching it like a Syd Barrett song, which worked much better.

7) "Mickey Pearce Waved Goodbye"
This song is about when our old bass player Dan left the band. It’s a bit of a tribute song really. The idea came about when people started asking us at gigs what happened to Mickey Pearce? Dan was a real presence on stage and really looks like the Only Fools and Horses character Mickey Pearce. It also fitted nicely with the English themes on the album.  It was pretty sad and shocking to us when he quit so we decided to write a song about it would be a fitting tribute to his services with Thee Spivs.

8) "Heroin Pin-ups"
"Heroin Pin-ups" is about how there always seems to be a poster boy heroin user in Rock 'n' Roll and how it seems to give people credibility in the music press. I also feel record labels exploit their artists and encourage them to become living clichés to help record sales. I also wanted to write a song that was like an instruction manual telling you how to become a heroin pin up. I think the media generally has a really distorted view of rock n roll and encourage people to not be them selves and the knock on effect of this is people start trying to recreate the rock n roll cliché and this is why there are so many fakes in the music world and I’m bloody bored of them.

9) "Let’s Talk About the Weather"
This was almost the title track and also inspired the artwork. The verses in the song are about the madness and terrible things that happen daily in London and the hypocritical nature of human beings but then its contrasted by the chorus which comments on how people talk about the weather as a way of escaping what’s really going on around them and also more light heartedly to avoid awkward silences.

10) "Jigsaw Man"
"Jigsaw Man" comments on how we as people are made up of all our experiences and by the people we know. In many ways individual characters are made out of many different pieces much like a jigsaw puzzle. But it also is about trying to find your self, which is represented by the idea of the missing piece.

11) "Mozart’s Locked Away"
I actually wrote this song a while back but it never really fitted with any of our other albums but it just seemed perfect for this one. The song was inspired by Outsider Art and is about all the great music and art that is made behind closed doors that is never seen or heard. I felt it fitted in with the reoccurring theme of escapism and I like the idea that there are people who are creating art for themselves and not for personal gain and public recognition.

"So that is the end of my track-by-track guide. I also thought I would mention the recording process itself. Ed Deegan as well as producing the album also played various instruments on the album and became like a fourth member of the band. Before the recording Ed worked hard to get the right guitar sound to complement the songs and also created a formula so we could maximize the time in the studio and he has supplied some notes on how he did it."
"Regarding the band sound. I wanted to make the main guitar do the whole job. This was achieved with a Piezo transducer stuck with blue tack between the bridge and tailpiece of a fender Jazz master. This was mixed with the amp tone (A 60’s Vox ac30) Then an ADT (artificial double track) of the amp sound. The Backing tracks were recorded live. Steve played to a click track for most of the songs.  The guitar and bass amp speakers were isolated. The drums were record with MS stereo and a few spot mics. Another interesting technique was the mix of drum machine and acoustic drums. We used this on "Heroin Pin-ups", it’s a mix of an 808 Drum Machine and acoustic drums played over it."

So, many thanks indeed to Ben for taking the time to contribute the great track-by-track guide to "The Crowd and The Sounds", it is an excellent album and will be available at our very special launch party at The Half Moon on June 29th. The Half Moon's address is 93 Lower Richmond Road, London SW15 1EU, the closest Tube station is Putney Bridge on the District Line (Wimbledon Branch) and the closest mainline Rail station is Putney, which has direct links to London Waterloo, Richmond, Twickenham and Windsor etc. For full details on the gig including advance ticket purchase information, please check out The Half Moon's Event page here. Doors at 7:30 pm, Past Tense 8pm, Fallen Leaves 9pm and Thee Spivs 10pm. Live Music curfew 11pm. Aftershow DJ Jeff Munday 11pm until late...