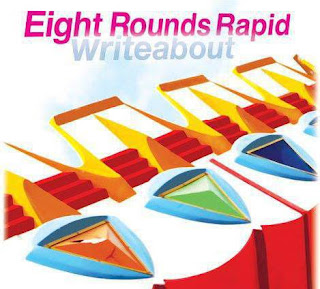 Southend-On-Sea's Eight Rounds Rapid launch their new single 'Writeabout' with a free gig at The Railway Hotel in their hometown on Friday 09th of August, and it will be the very first chance to get your hands on a copy. The title track has never been available in any format prior to this single, which is the first release on Podrophenia Records and it's strictly limited to 500 hand-numbered copies. Support comes from the always excellent Tuppenny Bunters, and then join Podrophenia DJs Piley and Mondo downstairs in the bar for the aftershow party!

Piley and Mondo may be better known for their DJing and Podrophenia Radio show and Podcast, not to mention their joint gig promotions with me at The Railway Hotel for The Len Price 3 and TV Smith. Here, Podrophenia give us the low down on the new single 8RR single "Writeabout".

Where might I have seen 8RR?
Supporting Wilko Johnson on his Farewell Tour.
Supporting Thee Faction.
At Podrophenia live event nights.

What do I need to know about the new single?
It's a limited edition 7" vinyl release - and the only format that "Writeabout" will ever be available on. The flip-side "Steve" is long-haul live crowd pleaser and fan favourite.

Check out The Eight Rounds Rapid Facebook page for up to date info and news.

Photo shows Piley & Mondo in action at The Railway Hotel, Southend-on-Sea at the very first (and packed-out) Retro Man Blog/Podrophenia night with The Len Price 3 back in March 2012.