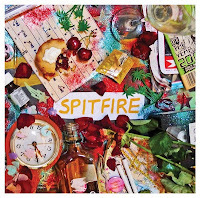 Jonny Cola & The A-Grades unleash their new album "Spitfire" on September 04th with a launch party at The Lexington in Islington. The album was completed thanks to an extensive "PledgeMusic" campaign, which involved fans contributing towards studio, manufacture and production costs in return for, not only copies of the album, but a mind-boggling array of special privileges, exclusive material and some quirky packages. These included goodies such as album test pressings, T-shirts, posters and fanzines to a private acoustic gig, free entrance to A-Grades shows for a year and even a naked calender! Their target was met impressively quickly, highlighting the growing interest in the band at the moment and it has enabled them to get the record out quickly, not just on CD and download, but on 180g heavyweight vinyl too. The album starts with the hum of a Spitfire engine before taking off with "In The Woods" and a swaggering heavy rock riff that's part Guns n' Roses part Hanoi Rocks and part twin-guitar wielding 80's Hair Metal. You see, The A-Grades are unashamed Rock fans - there is as much an influence of early Elton John and Queen's complex orchestral songs as there is of the much mentioned Bowie and Suede running through this album. They are not afraid to embrace high production values and cleverly constructed songs and it means that "Spitfire" is a wonderfully diverse and satisfying album, that hits you on first listen but is also sure to grow and improve with repeated listens.

New single "Tropical Beach" is, as the title suggests a great uplifting summer pop song with a superb chorus and with it's vivid images of a couple holidaying with a "bottle of gin and head full of sin" in a caravan park under the shadow of a nuclear reactor (Dungeness springs to mind...), as they dream of escape together to a sun-kissed beach, "pylons or palm trees?" they ask. There's an encouraging optimism in the song, "In a cold dark room there's a corner where it's always summer", could it be the result of Jonny's brush with serious illness I wonder? "Straight To Video" is next and this song was previously released as a double A-side 7" single, on glorious orange vinyl no less, with "Marlborough Road". It's a piano led ballad with the insistent chorus refrain of "hold it together boys..." repeated over a military drum beat. It is reminiscent of Suede's excellent B-Side ballads such as "The Big Time" or "Where The Pigs Don't Fly". Now, I must admit that next up is my favourite aspect of the A-Grades, "Rain Stopped Play" is a great raucous Punk blast. I like it when they let loose a bit and draw on a bit of sleazy New York Punk, the band even invited NY Doll Sylvain Sylvain to DJ at one of their club nights recently, and personally I'd like a bit more of this. It's an immense wall of guitar interrupted suddenly by a nice blast of bass riff from Simon, lovely stuff. The next number, "Blow Up" is in a way the essence of the A-Grades distilled into a real Glam-stomping classic, driven along by some fantastic drumming from Marco, great call and response vocals and a subtle stabbing sax. The sleazy chorus, "...don't talk with your mouth full", which seems to be about the dubious delights of being backstage with a band, flies off into an unexpected tangent  that made me think of The Super Furry Animals at their best. This song would make an excellent follow up single to "Tropical Beach" I think.

"Going Over" is a great number built round a guitar riff that builds beautifully and "Semaphore" is a slow burner that shifts the album's tempo and highlights the great guitar interplay between Mauro and Jez. "Sunset/Sunrise" is over six minutes of brilliantly constructed orchestral rock music, it's almost a mini-opera with distinct passages and strings that build and swell  into a magnificent climax. Gospel backing vocals and hand claps can be heard as the sound of planes battle with the guitars. Then the song breaks down into a beautiful piano motif and suddenly, a brief reprise of "Tropical Beach" emerges from the mix, before ending abruptly with a star-burst of synth.

I can sense some of the Bowie influence on next track "Wronghead" and I really like the lyrics on this which could be about the unattainable against the reality, or just simply a blind date gone wrong  "...this is what they thought they looked like, this is what I hoped you looked like, this is what I dreamt you looked like...". "Spitfire" draws to an ultimately satisfying, if somewhat mellow end with "Out Of The Woods, and the last things we hear, quite contrary to the brash album opening, are a simple piano and Jonny's voice. So, overall, although there is still an undoubted hedonism to Jonny Cola & The A-Grades, "Spitfire" is a very accomplished and ambitious album, and with it's reflective subject matter the band seem to moving on from their more London-centric songs of drunken debauchery and life in the Capital. Let's hope they don't lose that edge completely though...

Here's the video to the great new single "Tropical Beach"...enjoy!


After The Lexington Launch Party on the 04th, the band will play a few gigs in September to promote the album outside London. They will play at The Square in Harlow on the 06th, UnPlug in Birmingham on the 12th and The Prince Albert in Brighton on the 28th. Please check the A-Grades web-site for more details about venues and tickets.


To download the new album and back catalogue please visit the official Bandcamp site.

Email ThisBlogThis!Share to TwitterShare to FacebookShare to Pinterest
Labels: Jonny Cola & The A-Grades, Some Weird Sin