Mattias Hellberg "Wait For The Morning": New single out now with new album "Gurimolla!" to follow in September 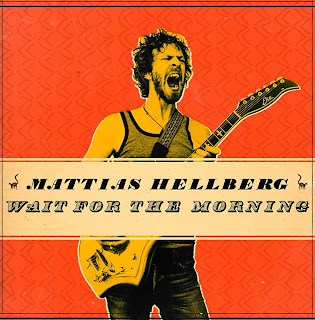 Mattias Hellberg has just released "Wait For The Morning" as a taster for his forthcoming album "Gurimolla!" which will be out on Moozy Music on September 11th. If you have already heard the last single "Coffee and Croissant" or seen Mattias live recently with his excellent band, The Fur Heads, featuring Swedish bass legend Nikke Ström from Nationalteatern, then you will know that the new album is promising to be his best yet. Here is the great video to the new single:

You can buy the single now, and check out his back catalogue at iTunes. Don't forget our special edition Retrosonic Podcast where we talk to Mattias Hellberg about his eclectic, genre-defying career as he finishes off the recording for his new album "Gurimolla!". It's a varied and exciting journey - from his early days in Karlstad putting on gigs in the college canteen for bands such as Union Carbide Productions to forming his own bands including the influential Nymphet Noodlers along with future Soundtrack of Our Lives members Martin Hederos and Mattias Bärjed and Free Fall bassist Jan Martens.


Along the way we discover admirers like Wayne Kramer from the MC5, Van Morrison, Ryan Adams and Iggy Pop and his numerous collaborations and side projects. These include The Solution with Scott Morgan from Sonic's Rendezvous band, Kanzeon, The White Moose, Jaqee, Nationalteaterns RockOrkester, The Hellacopters, The Soundtrack of Our Lives and of course Hederos & Hellberg. If that wasn't enough there are also his two excellent solo albums...

The Episode is generously soundtracked with lots of great music from a selection of his many phases. We're also honoured to have some superb exclusive and unreleased songs from his forthcoming album. You can listen to/download for free from our Retrosonic Soundcloud site.