Marie Modiano, the Paris based singer, songwriter, poet (and now author), will be very busy on September 30th as she simultaneously releases two brand new albums "Ram On A Flag" and "Espérance Mathématique" and her debut novel "Upsilon Scorpii" all on the same day! I saw Marie perform as part of a special Scandinavian weekend event at La Gaîté Lyrique in Paris last year and was captivated by her performance. I snapped up a copy of her album "Outland" at the merchandise stand and although it has since become one of my favourite albums of recent years, it was slightly disappointing that so many of the great songs she played that night were actually new and unreleased at the time. But now the long wait to hear those songs recorded is finally over and we also get the bonus of the second album too. The Event in Paris was curated by Swedish Singer-Songwriter Peter von Poehl and orchestrated by Martin Hederos, who not only appeared on stage with his own band, The Soundtrack of Our Lives, but also with Marie and Peter too. Equally as busy was the excellent drummer Ludwig Dahlberg (ex-International Noise Conspiracy and Mattias Hellberg's White Moose) who played brilliantly during Marie and Peter's sets and then rocked out with his band Free Fall. You can read a report and check out photos of that great weekend on the Blog here. 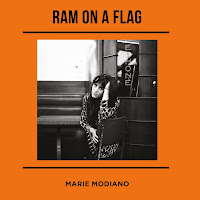 So, onto the new albums and Marie Modiano is once again reunited with Martin Hederos and Peter von Poehl on the English language "Ram on a Flag", which follows on perfectly from "Outland". With lyrics and music by Marie except on three tracks which are co-written with Peter von Poehl, the album was recorded at various studios in Sweden and features Marie on vocals and piano, Peter von Poehl on guitar and vocals, Martin Hederos on piano and organ, Christoffer Lundquist on bass and saxophone, Jens Jansson played drums and percussion and Thomas Ebrelius on violin and viola. Just like its predecessor "Outland", the album is a stunningly orchestrated piece that is organic and uncluttered and has a slight tinge of melancholy. Similar to Martin's old Soundtrack of Our Lives colleague Björn Olsson's current solo music, "Ram on a Flag" is extremely evocative of a coastal landscape, you can almost hear the sounds of seagulls and fishing trawlers heading off into a beautiful sunset. The lyrical subjects of "The Islands and The Skerries" and the stunning "Long Journey on a Rock-Pool Train", with it's swelling gospel choir backing vocals, reinforces that coastal atmosphere even further. My favourite track on the album is "New Wings of Mine", which would make a great choice as a single, and features some seriously impressive, almost Jon Entwistle style bass. "Paper Boots" is a great duet with Peter von Poehl, who also shares vocals on "Shutters of Sand" which is an epic track that builds nicely to a crescendo. The album ends with "Twilight Rhapsody", a beatifully simple piano based song that highlights Martin's admiration for Erik Satie and would be appeal to those that appreciated Soundtrack of Our Lives "Tonight". So, "Ram on a Flag" is a really impressive follow up to "Outland" and thoroughly recommended if you enjoy the orchestral side of The Soundtrack of Our Lives, David Sylvian's more accessible work, Kate Bush and other similar emotionally engaging music. 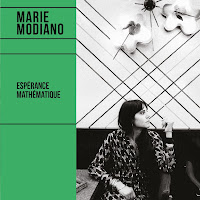 The second album "Espérance Mathématique" is a collection of Marie's poems put to music by Peter von Poehl and was recorded and mixed in Paris. It's a spoken word album with Marie reciting her poems in French over music performed by Ludwig Dahlberg on drums, Nicolas Mathuriau on percussion, with the string section of Zach Miskin and Marielle de Rocca Serra. All other instruments are by Peter von Poehl and the string arrangements are by Martin Hederos. Of course, my understanding of the album, if not my enjoyment, is hampered somewhat by my not speaking French, so I cannot appreciate the poems themselves, but I can certainly enjoy the wonderful delivery from Marie and of course the music itself. What springs to mind first of all are the two great Serge Gainsbourg concept albums "Histoire de Melody Nelson" and it's more musically diverse follow up, "L’Homme à tête de chou". So, an impressive double hit of albums from Marie, with both complimenting each other perfectly.


Marie Modiano is the daughter of French author Patrick Modiano and originally started out as an actress, studying at the Royal Academy of Dramatic Art in London and appearing in films such as "La Vie Privée". She then began peforming as a singer with a folk-jazz-pop group that included Grégoire Hetzel (piano), Daniel Yvinec (bass), and Arnaud Lechantre (drums). In collaboration with Hetzel as her producer and co-writer, she released her full-length debut album in 2006 on Naïve Records entitled "I'm Not a Rose", which included the single "C'est dur l'Amour". She then collaborated with Peter von Poehl and Martin Hederos on her 2008 follow up, "Outland", some of which was recorded at Svenska Grammofon Studion, the Gothenburg based studio run by Kalle Gustafsson from The Soundtrack of Our Lives. Then in 2012 l’Arbalète/Gallimard published a book of Marie's poems "Espérance Mathématique", on which the new album of the same name is based.

The albums "Ram On A Flag" and "Espérance Mathématique" are both released on September 30th by Nest and Sound Records and on the same day, Marie Modiano's first novel "Upsilon Scorpii" is published by l’Arbalète/Gallimard.

With many thanks to Damien Besançon at Laitdbac Records and Ludwig Dahlberg.