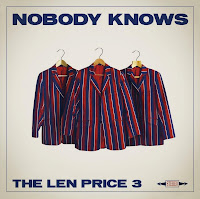 Retro Man Blog are very pleased to announce that we are putting on the Showcase Party for the long-awaited new album "Nobody Knows" by The Len Price 3 at The Half Moon in Putney on Friday October 25th. Not only will you get to hear some of the songs from the album performed live for the first time, but anyone attending the gig will have the opportunity to buy copies of the album on CD and Vinyl exclusively before the official worldwide release in January 2014. Please note there will be a limited amount on sale on a strictly first come first served basis, and due to demand there may be a limit on how many copies each person can buy, so make sure you book your tickets in advance from The Half Moon at the bargain price of £7.00 to avoid disappointment. Tickets will also be available on the door at £9.00. Support on the night comes from The Fallen Leaves and The Past Tense, and we also hope to announce some special guest appearances and competitions in due course. Anyone who has been to one of our Retro Man Blog nights at The Half Moon with The Len Price 3 will know they are very special events, so don't miss this one! You can read a report on last December's show here.

The Len Price 3 singer, guitarist and songwriter, Glenn Page, has kindly contributed an exclusive track-by-track guide to the new album to give you an idea on the background to each of the songs. Glenn starts off with Side 1 of the album with Side 2 to follow very soon...

"Nobody Knows"
One day recently, I went riding my bike round the streets where I used to live when I was a boy. I came to this house. It's a 1970's semi. The garden was really overgrown and the house was really tatty - yellowing net curtains, paint peeling off the windowsills and the doors. There was a storm brewing and it felt like a place where bad things would happen - and they did. When I was a kid, there was a boy that lived there called Michael. He lived with his mum and dad. He didn't really fit in with the other kids and was slightly eccentric. Anyway, when we were about 10 or something, he died. Choked on his lunch. His poor mother took to the drink and ended up in a bit of a state. You'd see her staggering down the street naked, carrying a bottle of vodka and screaming her head off. At some point, it all got too much and she killed herself. Her husband came home from work one day to find her swinging from a rope. I don't know what became of the old man. As I was remembering this, the melody and the words just came to me as I rode home.

"Swing Like A Monkey"
This is the title song from the forthcoming film "Pubmonkey". The film is the brainchild of our friend Jamie O'Hara. It's about a drunken layabout who gets caught up in a drug deal that goes wrong. Jamie gave me a copy of the script. I read it and laughed out loud a lot so I knew we had to do something for it. The song just came to me after reading the script.

"My Grandad Jim"
My maternal grandfather was an ordinary bloke who, like a lot of blokes of his generation were forced to do extraordinary things. He was in the 8th Army in World War 2 and saw some pretty hefty action - El Alamein and the D-Day landings among them. I was fascinated by his stories, turns of phrase and the things he knew and I'm still fixated. I had plenty of heroes when I was a kid - Spiderman, Glenn Hoddle, Indiana Jones, but no one could top my Grandad. Better than some prissy footballer or a geezer in a colourful skin-tight cat suit any day! When we recorded this I wanted it to be a bit like the sound I remember getting when I was in my first band, aged about 16 and we would record ourselves playing with a cassette recorder. I wanted to recapture the excitement, energy and roughness of us trying to be like Jimi Hendrix.
﻿
"Lonely"
This is about someone I used to work with who was hideously bitter and used to love making people's lives difficult. Mainly because she was so unhappy herself.

"Preying Mantis"
This is about a woman who stalks a bloke in order to conceive a child and then bins him off. It's not really about anyone in particular but it's inspired by a few real life stories involving people I know.

"Vultures"
I wrote this one about the way in which a death in the family can bring out the worst in people. Folks who never had any interest in the deceased when they were alive suddenly become really interested when they can smell the money. I've known whole families split apart over it - usually over who gets what in the will. Horrible. 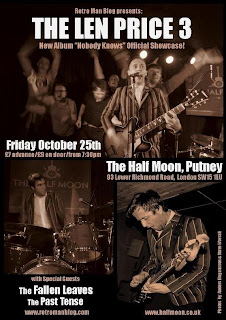 My paternal grandfather passed away about 3 years ago. Shortly before he died, he told me a couple of stories - both of which have found their way into songs. This is about somebody called William Mason. My granddad served his apprenticeship as a panel beater under William's tutelage at the Shorts Aircraft factory in Rochester - making Sunderland Flying Boats and Stirling bombers. Mr Mason turned out to be a pretty remarkable bloke. When the war broke out, he built a plane in his house. It had folding wings so it would fit in his back room or whatever. The idea was he would wheel it outside, clip the wings in place and fly up to take on the Luftwaffe. According to local legend, men from the air ministry turned up to copy his design for the folding wings on carrier aircraft - for which he never saw a penny. He and Mrs Mason were spiritualists and spent much of their time contacting the dead. Their son was shot down in a bombing raid over Germany during the war. After being told he was missing presumed dead, their contacts on the other side told them he was alive and well. As it turned out, he was - having parachuted to safety, he spent the rest of the war as POW. After the war, he moved to the US where he designed doors for Chrysler or someone.

"Wigmore Swingers"
Where I grew up, there was a thin veneer of respectability spread across the estate that masked a lot of unpleasantness. In this little corner of Thatcher's Britain, Policeman, Accountants and Bankers were busy getting their grubby mits on each others' wives and husbands. Kids were locked away so that these horrible people could shag each other. I watched this as a kid, slightly dumbfounded.

We will also be playing an exclusive unreleased track from the new album in our next episode of Retrosonic Podcast, so please keep a check on the Blog or our Retrosonic Soundcloud page for news.
Advance Tickets for the "Nobody Knows" showcase party can be ordered from the Half Moon here.


With thanks to Glenn Page, who will be running through the tracks on Side 2 for the Blog very soon.

Email ThisBlogThis!Share to TwitterShare to FacebookShare to Pinterest
Labels: Garage Rock, Mod, Paul Slattery, Punk Rock, The Fallen Leaves, The Half Moon Putney, The Len Price 3, The Past Tense