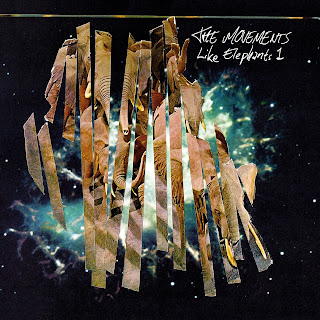 One of the Blog's favourite bands, the excellent Gothenburg based The Movements, will be releasing their brand new album "Like Elephants 1" on October 25th on Crusher Records, home to the equally excellent Gothenburg band Spiders. The band are moving away from their rawer sound and have opened the gates to the expansive world of Psychedelic Rock. "Like Elephants 1" is a very exciting project because, as the title suggests, it is only the first disc of two and it's follow-up "Like Elephants 2" is scheduled for release in early 2014. Working out two albums into a unique whole has been innovative, challenging and inspiring for The Movements. What is special about these two albums is that they not only stand strong individually but also create a whole, a kind of continuity, together. The Movements distance themselves from today’s fast-food consumption of songs pulled out of their context and instead dare to demand a greater commitment by the listener who, in return, gets to experience a collection of songs in their intended sequence.

"Like Elephants 1" offers swirling psychedelia in "Great Deceiver", catchy rock riffs with "All The Lost", choral psychedelia through "Like Elephants 1" and folk-rock in "It Takes A Spark". The album consists of ten well-worked songs of high quality and has for the most part been recorded at Music-A-Matic in Gothenburg and was produced by The Movements and Michael Nilsson. Here's a taster from the new album, the video to the new single "The Death of John Hall D.Y."...


The Movements possess great stage and songwriting skills and have over the years toured most European countries. The Movements’ upcoming album, "Like Elephants 1", is being released on October 25th on Crusher Records and will be followed by gigs around Sweden and Europe. Please check out their official web-site for further news on venues and tour dates.


You can listen to our Retrosonic Podcast special episode with The Movements here - Steve from Retro Man Blog talks to Thomas and David from one of Sweden's best psychedelic-garage-space-rock bands. Thomas and David take us on a trip through the band's story which includes chapters as diverse as writing a theme song for a German football team, to being the first band that legendary Union Carbide and Soundtrack of Our Lives guitarist Björn Olsson produced. From rehearsing songs in a hospital ward while singer David recovered from cancer they ended up being the first band to have their very own Space Rock album taken to Outer Space by Swedish astronaut Christer Fuglesang! Generously sound-tracked by loads of great Movements songs, you can find out more in this fascinating special edition podcast!

With thanks to Thomas and Peter from Crusher Records. Podcast cover photo by Josefine Larsson.