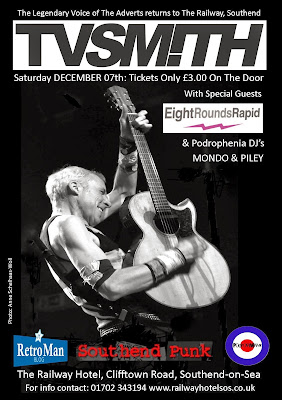 TV Smith, the legendary voice of The Adverts, returns to one of his favourite U.K. venues, The Railway Hotel in Southend-on-Sea on Saturday December 07th. This will be our third joint promotion at The Railway with Retro Man Blog, Podrophenia and the Southend Punk Web-site, and is promising to be another great night as we are very pleased to announce that support comes from the excellent Eight Rounds Rapid. After the live music, Podrophenia DJ's Mondo & Piley will be playing their usual eclectic mix of Psych, Punk, Soul and unexpectedly funky TV themes. The Railway Hotel is located at Clifftown Road, Southend-on-Sea, Essex SS1 1AJ. For more info call 01702 343 194.

You can check out a review of our first gig with TV Smith at The Railway back in June 2012 on the Blog here, and the second one in November last year here. Both reviews feature excellent photographs from Paul Slattery, Paul Hughes, Sophie Lo and Eric Waring.

"TV Smith, the legendary voice of The Adverts and hugely respected solo performer, joins us (Steve from Retro Man Blog, Rock photographer Paul Slattery and Adam from The Jetsonics) in the Pod to discuss his influential career and play an exclusive four song acoustic session. From early gigs on the edge of Dartmoor with his first band Sleaze to playing the Roxy with The Adverts at the very beginning of the Punk Rock explosion. From appearing on Top of The Pops, the end of The Adverts and his following bands Cheap and The Explorers, to his reinvention as an acoustic Punk Rock troubadour, TV brings us right up to date to the release of his latest album “Coming Into Land” and the publication of his excellent “Punk Rock Tour Diaries”, which cover his adventures as a travelling solo performer armed only with a guitar, a suitcase and an emergency sandwich".


Thanks to Fi and Dave at The Railway, Dave and Ian, Steve Pegrum and Paul Hughes.

Email ThisBlogThis!Share to TwitterShare to FacebookShare to Pinterest
Labels: The Adverts, The Railway Hotel, TV Smith