Les Clochards - New Album "Any Fool Can Wear Their Heart on Their Sleeve" Out Now! 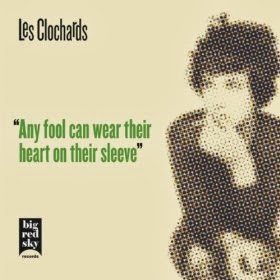 Les Clochards, the Oxford based band, have just released their second album entitled "Any Fool Can Wear Their Heart On Their Sleeve" on Big Red Records. On first listen, the bands pleasant acoustic based accordian-led Indie-Pop songs seem quite similar, but after a few listens you start to discover there are subtle and effective shifts throughout the album's tracks that flit effortlessly across continents and musical reference points. One minute I imagined myself sitting in a nice sunny English Pub garden sipping a pint of real ale being entertained by Morris men dancing to The Blue Aeroplanes and then I am whizzed off to a table outside a bustling Parisian cafe to be surrounded by gleeful buskers doing covers of Go-Betweens songs...! The band are based around Karen Cleave's inventive accordian and she also provides lead vocals on the sublime "Oh, But I Would" and "On My Ass" but it's the world weary baritone of Ian Nixon that takes centre stage, particularly on the album's stand-out track "(I Still Hope To) Convince You (Some Day)". On guitar we have the very busy Peter Momtchiloff, who I saw last year performing with both Would-Be-Goods and Talulah Gosh (click the links for photos of Peter in action...) and he also provides some rather more raucous guitar-work for the excellent Hot Hooves. Back to Les Clochards and there's more diversity as "Guilty As Charged" reminds me of Roy Orbison singing Sam Cooke's "Chain Gang" over some exquisite Johnny Marr acoustic guitar chords. Elsewhere there are quick trips to Memphis for some touches of Elvis crooning and then it's back home to the wry Englishness of The Monochrome Set...It's an extremely satisfying album that draws to a close with real warmth on "Salut Clochard", and you can order it at the band's on-line store here.

Here's the closing track to the album "Salut Clochard"...