A musical about The Kinks put me in a bit of a dilemma, I mean I love The Kinks yet I have a serious aversion to musicals, what to do? Well, I decided to go along once I heard that Ray Davies was involved in the initial story and in the end I am very glad that I did. In fact the only annoying thing about the whole experience was that the run at the excellent Hampstead Theatre is now completely sold out so I have no chance of going back to see it again. So, rest easy music fans, this stunning production by Director Edward Hall is no cheesy “Mamma Mia” song-and-dance show, it’s more like a gig with The Kinks own story weaving through it. Of course, as per all bands with a fanatical following, I am sure that "Sunny Afternoon" will be mulled over, holes picked and authenticity questioned. But this is Ray Davies’ own version of events turned into a sparkling, witty script by Joe Penhall. Settling in to my seat, I have to say that the set by Miriam Buether is absolutely stunning, the stage walls are adorned with hundreds of speaker cabinets all bathed in a warm orange glow, it’s visually very impressive. Hall has assembled a small but multi-talented cast of actors and musicians who swap effortlessly between various roles and instruments.

Ray is played brilliantly by John Dagleish who captures the slightly downbeat demeanour and vocal mannerisms of The Kinks front man very well, although his resemblance to Paul McCartney is a bit disconcerting at first! It would appear that Dave Davies hasn’t endorsed “Sunny Afternoon”; in fact it probably wouldn’t be in the grand Kinks “tradition” if he had, but it is rather a shame as George Maguire, who plays Dave, steals the show with his exuberant performance and superb musicianship. Somewhat ironically, the crowd seem to warm far more to Dave’s lovable rogue than they do to Ray’s cautious, serious nature. The Kinks are completed by Ned Derrington as Pete Quaife on bass and Adam Sopp as Mick Avory on drums. Adam in particular is a quite phenomenal drummer and together the four recreate The Kinks sound in spectacular fashion and there is a genuine buzz when in the opening scene the band kick in with a powerful version of “I Gotta Move”.

The fast flowing action takes in most of the important scenes in Kinks history. We are taken to the lively Davies family home in Muswell Hill with name checks to Ray’s beloved Arsenal and local pub The Clissold Arms. The brothers are in their bedroom working on the riff to “You Really Got Me” but they can’t get the grungy sound they are after until they take a knitting needle to Dave’s amp and finally that famous fuzzed-up distorted sound is born. "What we want is raw sonic violence". Stockbroker Robert Wace, and his equally upper class friend Grenville Collins, played with comic perfection by Dominic Tighe and Tam Williams, become the band’s well respected joint managers and they tie up the band in a head-spinning contract and publishing deal. Then set about trying to create an image for the band, “with your looks you need a gimmick” and there follows an amusing scene as they rummage through a wardrobe of outlandish costumes. They finally settle on outfits with thigh-length boots, Dave grabs a whip, “You look like Kinks” says Grenville, “We look like perverts” dead pans Avory and they burst into a rousing version of "Dedicated Follower of Fashion".

We see the different effects of fame and success on the two brothers, whilst Ray is shown to be uncomfortable with the trappings of stardom, prone to homesickness and depression. He meets Rasa, a confident girl with a broad Yorkshire accent and a love of the Blues and they fall in love. Rasa is played wonderfully by Lillie Flynn and her and Dagleish have a real chemistry, especially during a moving duet of "Strange Effect". Ray confides in Rasa that he is haunted by the  tragedy of Rene, his beloved sister who passed away on his thirteenth birthday from a heart condition, on the very day she bought him his first guitar. Meanwhile his younger brother takes to the Rock 'n' Roll lifestyle with gusto, living up to his nickname "Dave the Rave". This is where Maguire excels, whether he is swinging across the stage on a chandelier dressed in a pink nightdress clutching a bottle of bubbly or crashing an axe in a Hotel's reception desk.

Despite the success, tensions surface within the band, and at a gig in Cardiff they play “Where Have All the Times Gone" which is sizzling with barely controlled aggression, the lyrics seem to perfectly sum up the mood in the camp. Mick snaps and attacks Dave with his hi-hat stand knocking him out. Suddenly there's chaos with Dave lying unconscious on the stage, flashing lights and sirens going off all round and Mick being chased around the auditorium by the police. Ray is left alone on the stage bewildered. “Only a mad man would tour America with this lot". But off to America they go, only to be met by a wall of red tape and raised eyebrows over the band's name and appearance "you guys make the Rolling Stones look like US Marines" quips a Policeman. There’s pressure from all angles as the band refuse to pay their dues, “Are you communists?” one journalist asks, "No, we're working class socialists from Muswell Hill" says Dave and they launch into a sinister "I'm Not like Anybody Else". This stand-off with the unions sees The Kinks refused work permits and they are banned from performing in America for the next four years. They return home to Ray's dad telling them "sod's law, the most working class band in the business get brought down by the unions!"

Allen Klein replaces Grenville and Robert as the band's new manager and "the couple of old Tories having the time of their lives" bid farewell with a lovely acapella version of "Days". As the song draws to a close grown men clap that little bit louder to drown out the sound of lumps in throats being cleared. There's a lightening of the mood and we're in the studio with the band as they work on a new song and a familiar descending bass line rings out. "The songs were always about us" says Ray and they launch into a stunning version of "Waterloo Sunset" with Dagleish capturing Ray's voice with it's slight lisp perfectly. Then we switch to Madison Square Garden, and with their huge hit "Lola" The Kinks have finally cracked America, revenge is sweet. We are treated to a medley of "All Day and All of The Night” and "You Really Got Me" and the crowd really get into it, leaping to their feet and singing along at the top of their voices. "Lola" raises the roof and ends with the cast basking in a  huge round of rapturous and well-deserved applause. 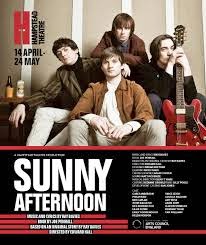 The Pete Quaife Foundation has been set up in memory of The Kinks bassist and co-founder to give children on dialysis some means of enjoyment, interest or entertainment while undergoing treatment. For more information on how to make donations please visit the site here.

Denmark Street, London's iconic Tin Pan Alley and home of Regent Sounds Studio where The Kinks, Rolling Stones and Jimi Hendrix once recorded, is under threat from developers. Lets fight the "Powerman" and ensure this historic street is not bulldozed into another soulless shopping mall. There is a fast growing campaign centered around Denmark Street's legendary 12 Bar Club, so please join in, sign the petition and spread the word! Check out more details here.

You can still see our very own photographic walking tour of some of The Kinks' north London landmarks including The Clissold Arms, the Davies family home, Konk Studio, Fortismere School, Les Aldrich Music shop, Lane Cafe, The Archway Tavern and more in our Blog archive here.

Photos by used by kind permission, with many thanks to Becky and Jess at the Hampstead Theatre.