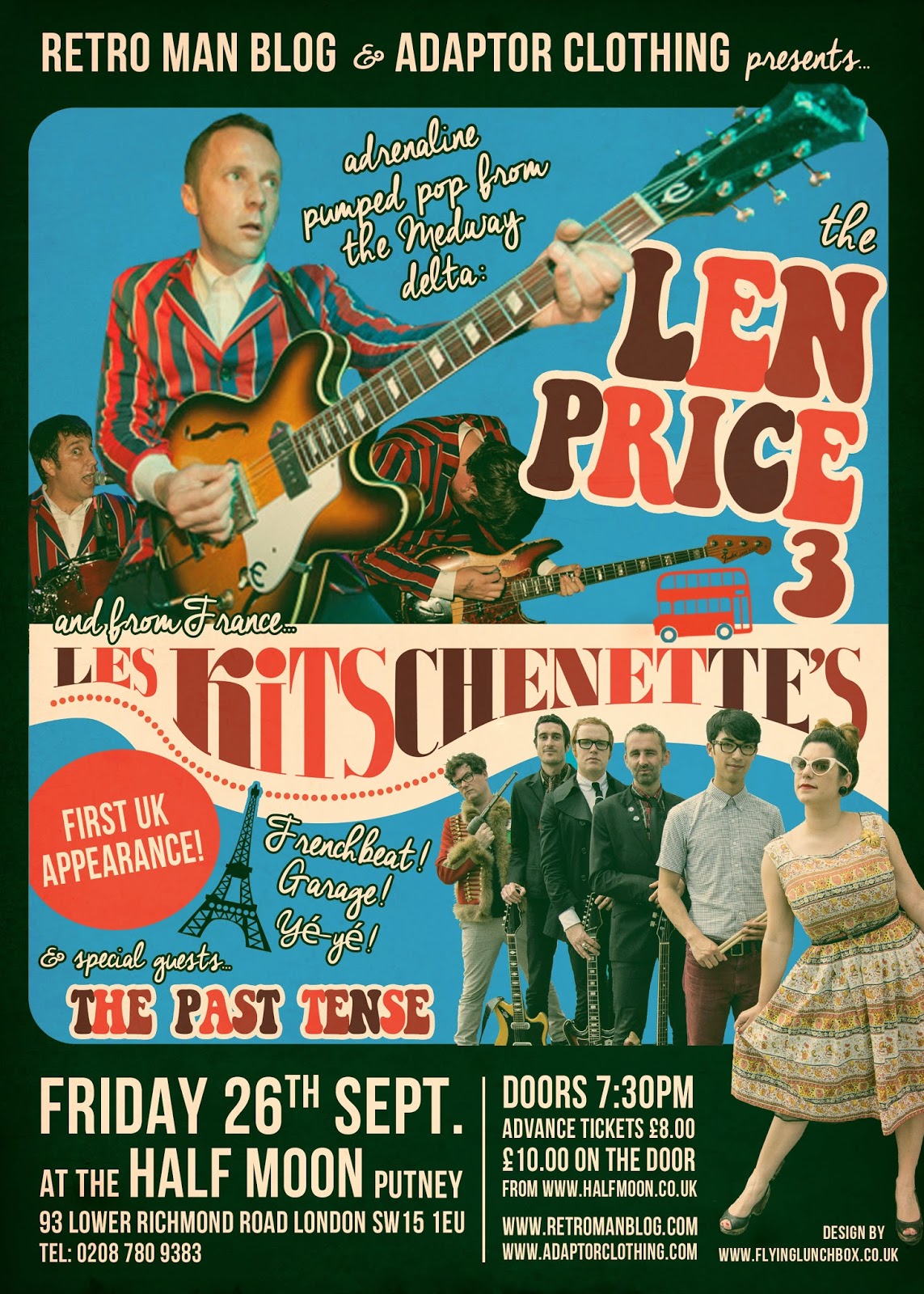 We are very pleased to announce that, in conjunction with Adaptor Clothing, the next Retro Man Blog Night will be on Friday September 26th at The Half Moon Putney where we will be presenting an Anglo-French battle of three of the best Beat Combos around. We have the splendid adrenaline fuelled Medway Delta Pop of The Len Price 3 headlining along with the rather spiffing Garage Mod-upon-Thames sounds of The Past Tense. To complete the line-up we sail up the estuary to extend a very hearty cross-Channel welcome to the exceptionnel French Yé-yé FreakBeat band Les Kitschenette's for their very first U.K. gig. Zut alors, à bientôt chums...!


The Len Price 3 are an adrenaline pumped pop band from England, forged in the traditions of their Medway Delta roots. They are a revelation to those who encounter them, encompassing all of what you would want from a band in one invigorating sonic experience. Their dazzling live performances feature a thunderous set of well-honed melodic nuggets played at breakneck speed, complete with shiny pop hooks and chrome glazed harmonies. But dig a bit deeper and you will find a rich lyrical content that is full of acid tongued lyrics and wry social observations. With each album and single release receiving glowing reviews and every live show leaving behind a highly satisfied audience full of enthusiastic devotees, The Len Price 3 are fast becoming a true national treasure…

The fabulous French Yé-yé group Les Kitschenette's have just released their latest E.P. which takes you right back to the stylish France of the '60's. Six incredible new tunes of French Freakbeat are just waiting to be played loudly and danced to at your groovy parties! The new 10" vinyl E.P. is called "2e Etage: Lingerie Pour Hommes" and is the second of a series of three releases on coloured vinyl; the first one was on red vinyl, this one in blue and the upcoming one will be released on white vinyl, altogether forming the colours of the French flag. It consists of cover versions of well-chosen nuggets from the 60s; all of which the band interpret with their usual dose of melodic organ, a shakin' beat, a hint of sax and flute, fuzz riffs, a stylophone and brilliantly elegant female as well as male vocals. If you like French 60's Garage-Beat, Les Kitschenette's are a must-see band!

Long-time Retro Man Blog favourites, The Past Tense are a powerful 3-piece band from Worcester Park/Kingston-Upon-Thames with a collective love of Sixties Beat, Mod, Psych, Garage Rock and Punk. Inspired by acts such as The Who, The Jam, The Clash, The Action, The Prisoners, Billy Childish and The Masonics, they mix it all up into their very own perfectly crafted anthems to create a highly danceable and energetic take on all of their favourite sounds.


Retro Man Blog Night's with The Len Price 3 are always something very special, so make sure you book your tickets in advance so you don't miss out on the fun, and save money too! Advance tickets are a bargain £8.00 direct from the Half Moon box-office here, by phone on 0208 780 9383 or buy at the bar to avoid booking fees. If any tickets are left they will be sold at £10.00 on the night. The Half Moon is at 93 Lower Richmond Road, London SW15 1EU and is about 10 minutes walk from Putney Bridge Tube Station (District Line Wimbledon Branch) and Putney main-line train station (regular service takes only 13 minutes from London Waterloo). Loads of buses go to Putney too.

Email ThisBlogThis!Share to TwitterShare to FacebookShare to Pinterest
Labels: Les Kitschenettes, The Half Moon Putney, The Len Price 3, The Past Tense