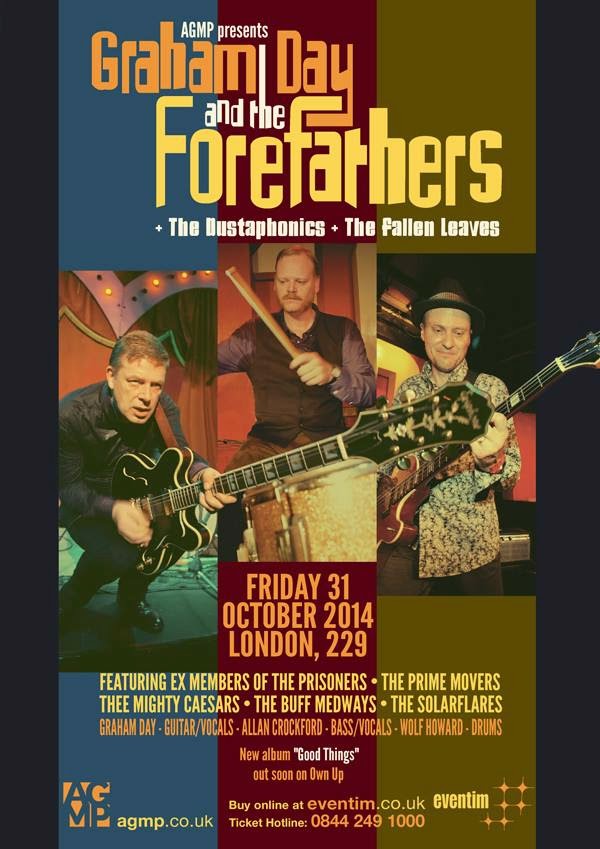 Graham Day & The Forefathers will play their biggest U.K. show so far at 229 The Venue, Great Portland Street, London on Friday October 31st to launch their brand new album "Good Things". As an additional incentive to book a ticket, copies of the album will be on sale at the gig exclusively prior to the official release date. "Good Things" will be available on vinyl and is packaged together with a CD version of the album plus download code and the band photos on the cover were taken by my Retro Man Blog colleague Paul Slattery. If that's not enough, an impressive line-up has been assembled for the night, with two excellent support acts confirmed, The Dustaphonics and our good pals The Fallen Leaves, so it's sure to be a great gig.

Regular Retro Man Blog readers would have hopefully checked out our recent Retrosonic Podcast special edition where I chat to Graham and his band-mates Allan Crockford and Wolf Howard, about "Good Things" and the reasons for getting The Forefathers together. Basically, those reasons were to simply and unashamedly celebrate past glories, to resurrect a choice selection of Graham Day songs from his four most popular outfits - The Prisoners, The Solarflares, The Prime Movers and The Gaolers – and give them a respectful dusting down. As there are no plans to release any new material under the Forefathers name, “Good Things” is meant to serve purely as a document, a snap-shot of some of the songs that the band have been playing live recently. Given that The Solarflares and Prime Movers were originally three-piece line-ups featuring Graham, Allan and Wolf- it's hardly surprising that most of the songs on "Good Things" are not particularly different from the originals. So don't expect radically unusual re-workings of their "greatest hits" such as Sparks did with "Plagiarism", there are no orchestral versions of "Hurricane" for example, and there are certainly no acoustic takes on "Better In Black”.  This is no "Unplugged" session, far from it; The Forefathers are most certainly plugged in and turned right up to 11, serving up high octane versions of their current set all attacked with a joyful verve and refreshing enthusiasm.

Of course it's the takes on the three Prisoners tracks that may be more of a curiosity to listeners but don’t worry, they work perfectly well in this stripped back environment. In particular one of my highlights of the album, "Be On Your Way", positively crackles and snaps along with a barely disguised vitriol. Anyway, Allan Crockford’s fluid and soulful bass-lines and sublime backing vocal harmonies easily fill in any gaps caused by that missing trademark organ sound. Graham’s incendiary guitar playing and vocals are, in my mind, better now than ever and there’s a new depth to some of those great Solarflares tracks such as “Mary” and “Can’t Get You Out of My Mind”. Only “You Always Find a Way To Hurt Me” slows the relentless pace somewhat and this allows Wolf’s excellent drumming to shine through. Hopefully, “Good Things” will remind anyone not familiar with the various post-Prisoners line-ups that some of Graham's best song-writing was to follow, and the raw and powerful Stooges style riffing of the title track had me digging out and re-evaluating my long neglected copy of The Prime Movers first album. But there's no point in pontificating on whether these versions are better than the originals or not, you just have to put this on the stereo, turn up the volume and revel in the power of some truly classic and timeless songs.


Tickets for the Album Launch gig at 229 The Venue on October 31st can be booked here and if you can't make it to the gig you can pre-order the album at the Forefathers new web-site here.

Thanks to Jonathan at No Other Publicity.

Email ThisBlogThis!Share to TwitterShare to FacebookShare to Pinterest
Labels: Allan Crockford, Graham Day, Graham Day And The Gaolers, The Dustaphonics, The Fallen Leaves, The Prime Movers, The Prisoners, Wolf Howard