2014 was another great year for gigs and new releases, and whilst we didn't quite top our average of one gig per week as we did in 2013, there were still loads of excellent live acts out there to get excited about. So, here's what floated our boat this past year. If you'd like to investigate further, please click on the highlighted link to take you to each band's web-site or to the relevant Retro Man Blog feature, review and photographs. Happy New Year and thanks for your support! 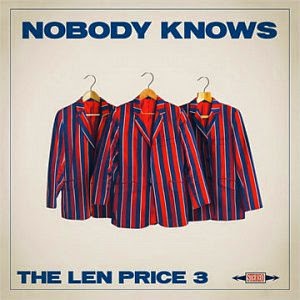 01. THE LEN PRICE 3 - “Nobody Knows”
A little bit sneaky as we actually put on the exclusive album launch gig and already named it album of 2013 although it wasn't actually officially released until February of 2014. However, it's so good that it deserves top spot again and although The Galileo 7's "False Memory Lane" pushed it all the way, nothing this year could quite come close to beating "Nobody Knows". The album showed The Len Price 3 developing their already considerable songwriting skills, breaking out of their Garage Rock roots without losing their trademark aggression. "Nobody Knows" is a set of perfectly constructed, timeless songs which culminates in the band's undoubted masterpiece "The London Institute" which promises much for the future of the Medway based trio.

02. GALILEO 7 - “False Memory Lane”
Allan Crockford is a busy man, at various points in time he has been a trusty sidekick and member of some superb bands such as The Prisoners, The Prime Movers, Graham Day & The Forefathers, James Taylor Quartet, The Solarflares, Phaze and The Stabilisers amongst others. With The Galileo 7 he stepped into the limelight as the main songwriter, lead vocalist and guitarist and on this, the band's third album, he has produced a quite superb collection of top quality Psych Pop songs that are crammed full of scorching guitar riffs, catchy keyboard lines and melodic vocal harmonies. Think the Beatles, Syd Barrett, Julian Cope and The Left Banke and you might get the idea.

03. GRAHAM DAY & THE FOREFATHERS - “Good Things”
A refreshingly different take on a covers album as Graham Day has decided to cover his own songs! But this is not a collection of acoustic, orchestral or radically different versions of old classics, far from it, these are supercharged live-in-the-studio assaults on his back catalogue. Pretty much reforming The Solarflares to assist, Graham, Allan Crockford and Wolf Howard positively attack a choice set of songs from The Prisoners, The Solarflares, The Gaolers and The Prime Movers. Bursting with energy and vitality, the originals take a hell of a powerful beating! Oh, great cover photography by my Retro Man Blog colleague Paul Slattery too...!

04. BILLY CHILDISH & CTMF - “Acorn Man”
A resurgent Medway scene sees a clean Kentish sweep of the top four albums completed by a brand new release by Billy Childish under the guise of Wild Billy Childish & CTMF. Harking back to the more accessible sound of The Musicians of The British Empire, "Acorn Man" is full of that trademark guitar and has Nurse Julie taking on more of the lead vocal duties and backing vocal harmonies. For me this is definitely one of his best albums and he sure has a lot to choose from!

05. EBBOT LUNDBERG - “Be Careful What You Wish For!”
Low-key limited edition release of demos by The Soundtrack of Our Lives ex-front man Ebbot Lundberg that would go on to form the basis of his superb "Homo Futurus" E.P with The Indigo Children. This release went some way to filling that huge TSOOL shaped hole in my life, it's great to have the big Swede back on this form.

06. THE FLESHTONES - “Wheel Of Talent”
America's hardest working band have still got it and are sounding as fresh and vital as they did when they first formed nearly 40 years ago. The only thing to beat the energy in this record is the energy that they still have when they play live! In "Remember The Ramones" and "What You're Talking About" they have produced songs that can match anything in their impressive back catalogue.

07. VIC GODARD & SUBWAY SECT - “1979 Now!”
Northern Soul meets angular Post-Punk in this upbeat collection of short sharp dance songs. If you're good at multi-tasking and can sing along and dance at the same time then this album is for you.

08. EIGHT ROUNDS RAPID - “Loss Leader”
"Loss Leader" is the superb debut album of totally original and idiosyncratic music from the enigmatic Southend-on-Sea based four-piece. David Alexander's quick-fire half spoken vocals spit out some quite brilliantly observed lyrics and the band, featuring Wilko Johnson's son Simon on guitar, kick up a blistering racket behind him.

10. OF ARROWE HILL - “A Conspiracy of Clocks"
Although this was only released a few weeks ago, this album still crashes into the Top 10 as it is so refreshingly different and the vinyl is beautifully packaged. Some songs are presented as mere sketches with the studio chat left in and it's that spontaneous feel that reminds me of Robert Pollard and Guided By Voices. Other times Of Arrowe Hill are pure English pastoral pop like XTC or Michael Head's album as The Strands. Whatever they are, these are nothing short of literary, intelligent little gems of songs crammed full of many melodic twists and turns.

12. WILKO JOHNSON & ROGER DALTREY - “Going Back Home”
Similar to the Graham Day & The Forefathers album, this is another legend looking back on his career and reviving some old classics. Wilko Johnson has finally found a vocalist in The Who's Roger Daltrey that can equal Lee Brilleaux's raw R'n'B growl. A stunning success made when Wilko wasn't even sure if he would live to see the album released. His subsequent against-the-odds recovery from cancer was definitely one of the most moving and inspiring stories of 2014.

13. VIV ALBERTINE - “Vermillion Border”
Excellent solo album from the former Slits guitarist that is both challenging and rewarding and features a cast of famous names including Mick Jones, Dylan Howe from The Blockheads and a different bassist on every track from Norman Watt-Roy and Jack Bruce to Tina Weymouth and Dennis Bovell. A perfect soundtrack to her recent searingly honest autobiography.

14. TV SMITH - “I Delete”
The legendary voice of The Adverts follows up the brilliant album "Coming Into Land" with another collection of his beautifully observed tales of modern life. A truly inspirational songwriter, this time TV has chosen to move away from the acoustic based sound of his live shows to release a shiny, polished and upbeat album that doesn't detract from the message within the songs.

15. MUCK & THE MIRES - “Dial "M" For Muck”
Despite the name putting me off for some time I couldn't ignore the rave reviews this band were getting and this Dirty Water Records release certainly showed me what I've been missing. Power Pop sensibilities and good time Rock & Roll that evokes The Fleshtones and The Woggles at their best.

16. NINA PERSSON - “Animal Heart”
Nina's vocals just keep on getting stronger and stronger and this album of perfectly crafted pop songs highlights this in the best way possible. "Food For The Beast" and "Animal Heart" are what pop music should be all about.

17. THE TEAMSTERS - “The Teamsters”
Some great songwriting lifts this album head and shoulders above most of the samey Garage Rock music that gets sent into the Retro Man Blog. Thee Milkshakes, early Kinks and Hamburg-era Beatles are channelled into some excellent crunching pop songs such as "I'll Take What I Want" and "I Would Cry". Definitely a band to watch out for in 2015.

18. THE pUKES - “Too Drunk To Pluck”
Although it's impossible to capture on record the sheer exuberance of seeing a 20-piece Ukulele orchestra performing covers of Punk Rock classics, this debut album comes close. With some originals nestling between tracks by Ramones, Cock Sparrer, Wire and The Dead Kennedys, The pUKES prove they are far from a one-joke act.

19. THE YOUTH - “Nothing But The Youth”
Like The Teamsters, this Danish outfit are working in a quite traditional genre but have the songs to make them stand out amongst a sea of forgettable Garage Rock bands and this impressive debut promises much more great music to come.

20. STUPIDITY - “Fore!”
Raw and Rockin' R'n'B from the Stockholm based four-piece, they are pals of The Fleshtones and it shows as some of their boundless energy has certainly rubbed off on the songs on "Fore!" The double hit of "King Midas" and "On Fire" has to be one of the best opening salvos of many an album. 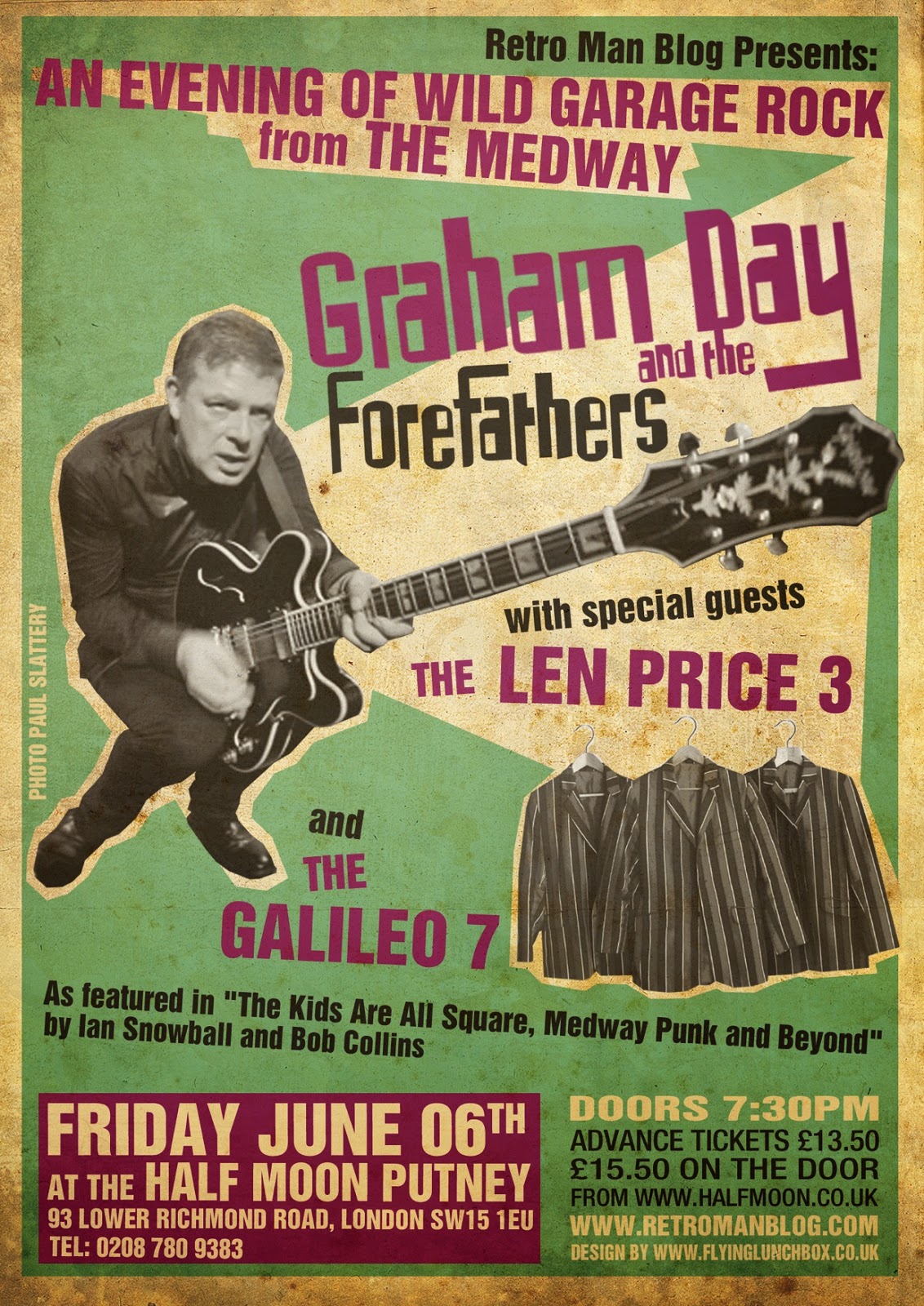 03. THE LEN PRICE 3 + LES KITSCHENETTE'S + THE PAST TENSE - Half Moon Putney September 26th. For review and photos please click here.

05. THE MONOCHROME SET + THE FALLEN LEAVES - Half Moon Putney May 24th. For review and photos please click here. 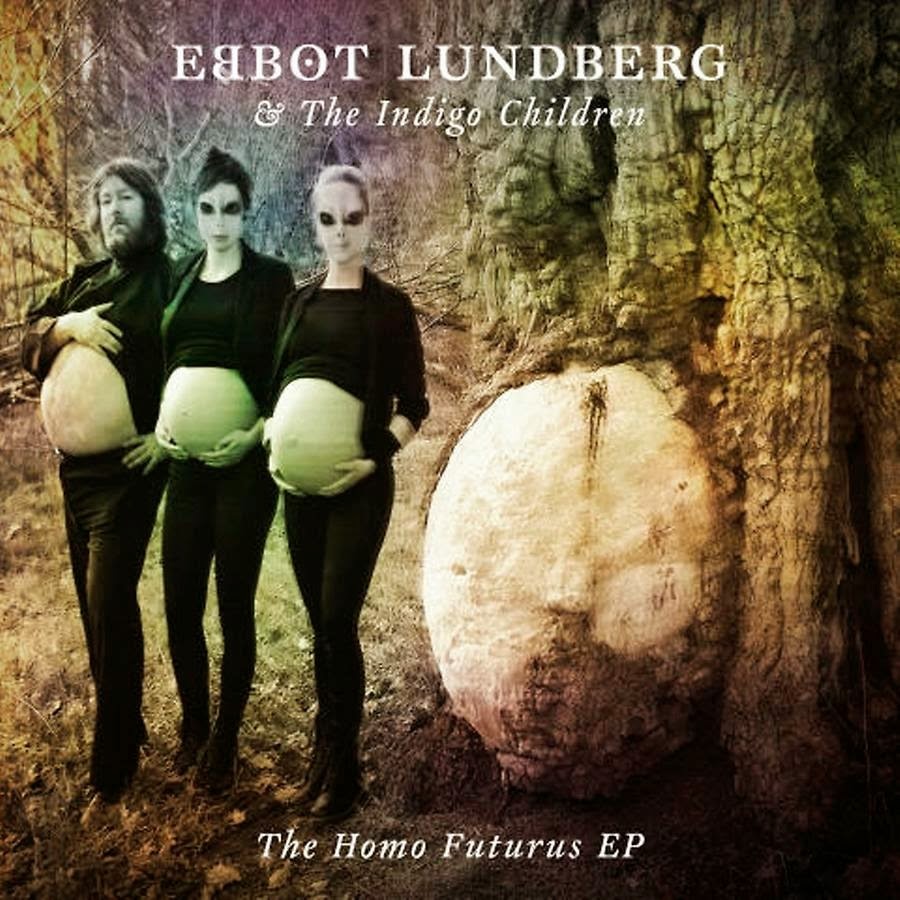 For a reminder of our pick of 2013 please check out the Blog Archive feature here.

Thanks to all the bands who played at our Retro Man Blog gigs in 2014 - and of course all those of you who have come along to the gigs, helped and supported us throughout the year. Retro Man Blog and Retrosonic Podcast are both non-profit making D.I.Y. ventures set-up purely to promote great underground music so your continued support is very much appreciated.