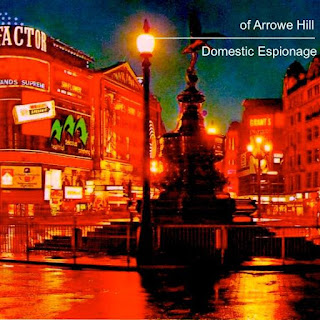 of Arrowe Hill held their new album launch at the Oxymoron Pub in Lambeth. This pub is the antithesis of the characterless chain pubs and the achingly cool minimalist bars that are taking over London. Although situated on Lambeth Walk (Oi!), even the local pearly kings and queens would have to put their shades on to avoid being dazzled by the random riot of colour that greets you when entering. A conspiracy of clocks in what appears to be Salvador Dali’s fireplace seems like a good place to start this review. 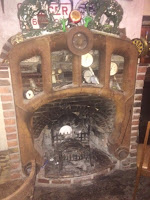 Tonight consists of two sets; a solo half hour acoustic set with a short break, followed by an extended set from the band. First up, the band’s front man and songwriter Adam Easterbrook pulls up a chair in front of a sizeable audience of friends, fans, and pub locals and, without amplification, runs through a set of songs from the past and present of his considerable back catalogue. The melancholic wonder of "Whatever that Means" is starker and darker than its more luxurious recorded version and the lyrics; 'when wonderland is in full retreat...keep it together, whatever that means' gain extra resonance when performed with just voice and acoustic (and in such an Alice in Wonderland setting). This set also features stripped down renditions of new album tracks, including its opener "You’ve Changed" that, on first listen, deals with the paranoia induced reflections on a sudden rise in personal status and "This Girl", which gets a laugh when Adam dedicates it to Theresa May. The idea of playing an acoustic set without amplification really worked, unwittingly forcing the captivated audience to strain a little to listen to the lyrics, greatly enhancing the informal ‘campfire' atmosphere of the set.

After a short break, the three-piece line up appear. The band have set up at the rear of the pub and, despite relatively spartan amplification arrangements, provide the audience with a full-blooded rendition of eight songs from the album released this very day and, as I discover later, some tracks from the next album that is already a work in progress. Particular highlights are the melodic "You Wish (It Was This Easy)", a bruised love song suggesting that, despite all life’s challenges, the couple in question can put the world to rights over a bottle of wine (hence the somewhat sardonic song title). "Oh! Serendipity" appears already to be an audience favourite; it’s nagging, catchy melody recalls the golden era of the Beatles and the Kinks but, also very much rooted in ‘the now’ with its narrator wistfully reflecting on winning the lottery; and on what he would do with the winnings (and what he would say to his boss) while reflecting on societies obsession with ‘being someone’. Last year’s single "Keep on Sweet Talking" is a claustrophobic, tense affair that touches on seduction and insomnia, and the encore "She’s Gone off the Rails" a swirling, powerful ‘The Who’ like account of a life in descent and turmoil.

On tonight’s evidence, "Domestic Espionage" is a more expansive, hard hitting collection of full-bodied songs than its fine predecessor, "A Conspiracy of Clocks". It’s easy to go overboard about the profound and poetic joys of Adam Easterbrook’s lyrics, but these songs are able to shine in an even brighter light due to the contributions of bass player Jason Hobart, and drummer Ian O’Sullivan, who provide the musical punctuation to Adam's flowing prose. This rhythm section have played together for many years in their previous band The Aardvarks and, as a unit, they appear to naturally 'sing from the same song book'. Their contributions help keep the mood of the songs upbeat with a somewhat psychedelic pop edge. They also provide a great foil for lyrics that mine the darker aspects of life whilst searching for the shards of light that make it all worthwhile! A final word of thanks should go to the Oxymoron proprietors, Bill and Lisa whose rather fine and quirky pub provided the perfect setting for tonight’s proceedings. - David Leach June 2018

You can order "Domestic Espionage" on 180mg vinyl or the digital version via the Of Arrowe Hill Bandcamp site here. It's also available from Rough Trade or Sister Ray Record stores. For more information on the band, including news and upcoming gigs, please check out their Facebook page here. With thanks to David for the excellent review.
Posted by Retro Man at 20:20

Email ThisBlogThis!Share to TwitterShare to FacebookShare to Pinterest
Labels: Of Arrowe Hill, The Aardvarks