One of Retro Man Blog's favourite bands Eight Rounds Rapid will release a brand new live album recorded at Kulturzentrum Merlin in Stuttgart on Kosmik Orgon Kanister Broadcast Records on November 2nd. It's out on limited edition numbered vinyl in Deluxe and Regular versions and is available to order from the band's Bandcamp site here. The Deluxe version includes a bonus 7" Single and comes with two cue sheets, A2 poster, three printed photographs and a copy of the setlist of the night that the broadcast was recorded. Rooted in the infamous Canvey Island R'n'B tradition, Eight Rounds Rapid channel the fervour of Dr Feelgood, Wire, Gang of Four and PIL with gritty tales of the underworld that rankle beneath the seaside kitsch of their hometown, Southend-on-Sea. With a blast of no-frills, bullshit-free excitement, the English four-piece take you back to the angular, drugged-up thug punk of the 1970s — but they’ll remind you of nobody but themselves. Enigmatic singer David Alexander commands the chaos with an outsider intelligence and nutty humour that shines through in barbed verse worthy of Mark E Smith — always delivered with a thick Essex drawl. To his right, guitarist and R&B ruffian Simon Johnson leads a sonic assault, his unusual style of thrashing out rhythm and lead simultaneously often leaving his scratch plate splattered with blood making for incendiary live performances. Geezer-rock rhythm comes in the shape of a cut-and-shut Mk1 Ford Capri as bassist Jules Cooper and drummer Lee Watkins wildly push each other to furious speeds. With quality lyrics and an erratic sound, the band have found a devoted following of fans that sing along to unique songs like "Steve", "Dostoyevsky" and "I Like It". Eight Rounds Rapid released both of their LPs "Lossleader" and "Objet d’Art" to critical acclaim in the UK music press. They’ve played prestigious support slots at The Royal Albert Hall and Koko Camden and have performed in England, Wales, Scotland, France and Germany. 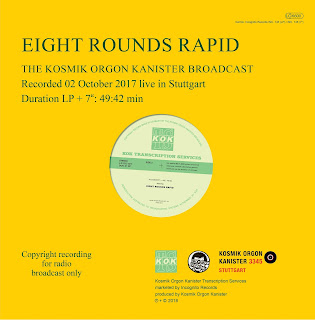