It was great to see our friends Les Kitschenette's over from France again, it seems such a long time ago since they played their very first U.K. gig at one of our Retro Man Blog Nights at The Half Moon Putney and tonight they were back, headlining another superb Weirdsville, which had the added attraction of the excellent DJ Tracey ScreamCheese. There has been a line-up change since I last saw them with only dual vocalists Ludo Kitsch and Lucille and drummer Claude remaining but the new members take to the task perfectly and they sound as good as ever. Some of my own personal highlights of a thoroughly enjoyable set included a fuzzed up "Psycho!" with Lucille on the flute and Ludo on a stylophone and a great version of Serge Gainsbourg & France Gall's "Dent de Lait, Dents de Loup". Then there's covers of Andre Verchuren's quite bonkers "Le Jerk à Pépé" and that timeless classic by Delphine "La Fermeture Eclair" with its stinging guitar riff intro which sends a shiver down the spine, all given that unique Les Kitschenette's twist.

However on their latest EP - the snappily entitled "C'est pas d'la Physique Quantique, du Chant Grégorien, ou du Lapon" which is the third in a series of 10" red, white and blue vinyl releases (a tricolore-trilogy I suppose) - they break with their usual tradition of mining the vaults of 1960's French Yé-yé to include some English language originals all given a Gallic twist. These include a rockin' "Route 66" ("Jusqu'en 66"), The Kinks classic "Well Respected Man" ("Un Jeune Homme Bien") although Petula Clark got in there first with that one, and Shocking Blue's "Send Me a Postcard" ("Envoie-moi un Sexto"). Ludo teases us, "you might know the words to this next one, but do you know them in French?" If they were ever to make a French remake of Austin Powers, Ludo would be nailed on to play the lead role, with Lucille as his glamorous side-kick and as if to reinforce my idea they play a cracking version of Ming Tea's "BBC" from the Austin Powers movie as their final encore. A very fitting way to end a truly uplifting performance.


Beforehand, The Voo-Dooms opened proceedings with a superb show that was befitting the launch of their excellent debut album "Destination Doomsville" which has just been released by the Trash Wax label on suitably splattered coloured vinyl. I'm a bit surprised they didn't hang back a bit to get it out on Halloween as it's a deviously fiendish collection of mighty fine horror-tinged tunes. However, copies of the LP sold like hot cakes on the night and there was an abundance of Voo-Dooms T-Shirts being proudly worn by their sizeable following. Not bad at all for a band that only formed in January earlier this year by Mick Cocksedge on lead vocals and guitar, Dave Prince on drums, ex-Milkshake current Masonic Bruce Brand on bass and guitarist Kevin Smith, who you might recognise from The Baron Four. The spooky "Teenage Ghoul" is followed by the equally danceable "Doing The Plague" which you can hear played in the latest episode of our Retrosonic Podcast.

I thought they were much tighter since I first saw them at the Beatwave weekender back in July and they seemed to be enjoying themselves as much as we were in the crowd. It's not all death, gloom and horror though - "Meet Me Here" is a heartfelt country-tinged number and "Come On and "Von Devil's Girl" are classic examples of catchy Rock'n'Roll. They up the pace again with a great version of Shel Naylor's 1964 stomper "One Fine Day" which is powerful enough to raise the dead. There's a sudden crisis though, "Oh no, I've dropped my shrunken head" says Mick, "you don't hear that every day in Camden do you?" and someone in the crowd replies "actually, you probably do!" So, all in all a great set from a band that promise a lot more ghoulish fun to come in the future - get doomed!


You can check out more photos of the gig at the Retro Man Blog Facebook page here and there are some more videos at our YouTube channel here. You can also hear a track from the Voo-Dooms new LP in the latest episode of our Retrosonic Podcast, which you can stream or download below:


Thanks to Mr A & Alex for yet another great night of Weirdsville entertainment! Don't forget to check out the You Got Good Taste web-site for what's up next! You can order The Voo-Dooms album "Destination Doomsville" from Trash Wax Records or signed copies direct from the band at their Facebook page here. 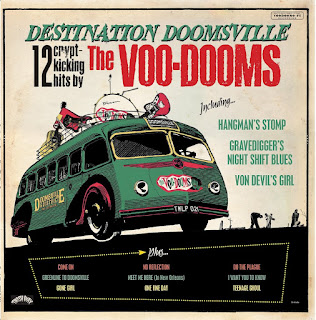