Jan Martens originally made his name as the bassist with the Karlstad based Nymphet Noodlers who, according to our in-depth Retro Man Blog retrospective, would go on to become one of the most underrated yet influential bands in Sweden. After all, Jan and his band-mates, vocalist Mattias Hellberg, guitarist Mattias Bärjed, keyboard player Martin Hederos and drummer Jesper Karlsson certainly had a lasting impact on the Swedish music scene. The Hellacopters, Nicolai Dunger, A Camp, The Solution, Stefan Sundström, Dundertåget, Henrik Berggren, Diamond Dogs, Refused, Tonbruket, Sofia Karlsson, Anna Ternheim, Nationalteatern, Håkan Hellström and of course The Soundtrack of Our Lives and Free Fall…the list of bands, artists and projects that each has been involved with in some way or another over the years could be longer than a telephone directory!

Jan, whose inventive and thunderous bass playing has seen him compared to John Entwhistle, has just released a brand new solo LP entitled "Voices – Part 1". The seven track album starts off with the stomping fuzzed up robotic sound of "Big Muff Strikes Again" and then takes us on an eclectic journey that encompasses the catchy guitar driven Pop of "Reaching Out" to the free-form jazz of "U&I" and the atmospheric Pink Floyd influenced dreamy Psychedelia of "Coming Down/Below". So, let us speak to Jan and get a bit more background information on his journey from Nymphet Noodlers right up to the present day and the release of this intriguing new album.

Q: Jan, Nymphet Noodlers called it a day rather unexpectedly after releasing just the one full length LP "Going Abroad", what did you do after the split?

JM: Well, I joined up with ex-Noodlers’ guitarist Mattias Bärjed in the band Mindjive for about six months. We toured Sweden and Germany (with Refused). Then I moved to Stockholm and got into Rocket 99 with Jesper, another ex-Nymphet Noodler and Andreas Byhlin from Singer. We made one album in 1999 but then that ended so I formed The Jan Martens Frustration, also with Jesper. At the same time I toured with Text, a very loose, improvisational band/project started by, among others, David Sandström from Refused. I was also a member of David’s backing band when he toured his first solo album after Refused. I’d recommend “Om det inte händer något innan imorgon, så kommer jag”. An entire album about his grandfather, a farmer in northern Sweden. It’s a fantastic record, really unique.

Q: I love The Jan Martens Frustration album, especially the track "Pole Position" which has such a superb bass line. It was a shame that this project was also short-lived. What happened?

JM: The recording of the JMF album was very troubled, mostly due to a conflict regarding the financial deal between the record company and the producer. It led to huge delays in the recording, which was horrible. This was a time when the whole music industry went through major changes and things were very insecure. Also one member, Olof, got very ill in 2002. Jesper started playing with Diamond Dogs and I started thinking of getting an education. I got me one in psychology. JMF grew into my next band, Convolutions. 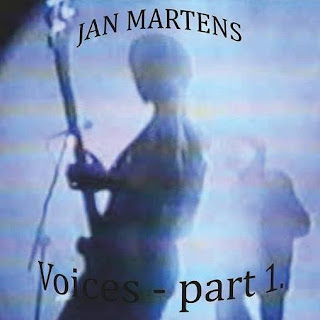 Q: Did you stop music while you were studying?

JM: For a while I was in Thomas Rusiak’s touring band along with Christian Gabel on drums and Free Fall Producer, Martin "Konie" Ehrencrona on guitar. During this period I also rehearsed and recorded with The Plan although that material was never released. During my university years I rehearsed and recorded with Convolutions, a duo featuring Olof Korlén, Jesper’s younger cousin. He had also played guitar solos on four songs on the JMF album and played live at most of our shows, sometimes with Robert 'Strings' Dahlqvist on second guitar. Unfortunately, they both died within less than four months of each other, not long ago…Olof very sadly killed himself in late 2016. He suffered from a severe mental illness, with psychotic episodes, that first broke out when we were playing in JMF. The song "x7009" on the new album is about him.

Q: Of course we know about Martin Hederos and Mattias Bärjed joining The Soundtrack of Our Lives, but you have also had some association with them too haven’t you?

JM: Yes, I also played on some songs on Mattias Bärjed’s soundtrack to the TV series "Upp Till Kamp" and the movie "Call Girl" and was a member of the fictitious dance band "Marzipan" in the "Gentlemen" movie and TV series. I also stood in for Kalle for some Soundtrack of Our Lives shows in 2011 and 2012. This year, in addition to "Voices – Part 1" I’ve also done some sessions for Daniel Haeggström’s Haertz Arkestra. He’s not performing himself, he’s producing and he likes to get different people together to see what happens. He has chosen and rearranged several songs from Björn Olsson’s "Shellfish" albums… When we were mixing the NN album in '94 me, Mattias and Mattias stayed in Björn's apartment. He then played us some of his peculiar home recordings that later came to be TSOOL songs. Also, Ebbot produced the NN album.

Q: You released a critically acclaimed classic Heavy Rock album with Free Fall in 2013 with Mattias Bärjed, vocalist Kim Franson and drummer Ludwig Dahlberg and many people have been waiting for a follow up. When did the idea for a solo album come about? After all, it’s been 14 years since the last album to bear your name (Jan Martens Frustration) was released.

JM: Well, I began working on this album sometime in the summer of 2014 when it had become clear that the motivation was not where it ought to be for every member of Free Fall. I decided that this time round I didn’t want to try to form a new band again as it is very difficult to find the right chemistry. However, I definitely didn’t want to give up playing - not at all - as during the Free Fall years I found myself getting more into music again after studying psychology for half a decade. I wanted to try a bunch of ideas that I found interesting and original but that had either been rejected or met with disinterest or just didn’t work out well in earlier bands. "Voices – Part 1" is much more of a solo project than the Jan Martens Frustration, which was after all, meant to be a band. I’ve never really been interested in being a solo artist, for the most part I simply prefer bands. Always saw myself as a band person. Had to change that, though.

Q: You’re not only playing bass on the album are you, you’re also playing guitar and singing?

JM: Yes, and piano and percussion and drum programming… I thought I should try to do as much as possible by myself this time which meant that I needed to get better at playing guitar. I mean I really had to learn to play the guitar the way that I wanted it to be played on these songs. I’m very keen on improvisation, I want a loose, spontaneous, jazzy feel. To me that’s the highest art, most of my favourite bands improvised a lot, especially live. And I think in rock music that part of it since has been lost, to a large extent. So, for 3-4 years I’ve been annoying my family with hours and hours of noisy guitar, practicing at home using Marshall and Hiwatt amps.. Listening to someone practicing controlling guitar feedback can’t be too rewarding…

Q: Were you nervous about singing?

JM: Yes. I needed to improve my singing. In fact, I ended up singing more than I first intended as originally I was thinking of asking people to sing guest vocals quite a bit. But as time went by I came to decide that it would probably be necessary to also try to do that myself. There was lots of trial and error with what keys the songs should be played and sung in, as my vocal range is quite limited.

Q: You said you had a clear idea of how you wanted the album to sound, how did you go about making it happen?

JM: Quite clear at least. One more thing that I needed to do was get the right gear to be able to record and produce the music at home, to make it sound the way I wanted it to. I have never been satisfied with the production on anything I’ve played on before, especially not with the bass guitar sounds. So I began searching and trying out guitars, microphones, guitar and bass speakers and even different strings that actually can make huge differences in sounds and playability. I also tried and learned to control various fuzz pedals and other stomp boxes and different methods of recording too. I love fuzz boxes, they’re like instruments in themselves. Extremely dynamic and sensitive to touch and guitar volume and tone controls. I ended up with a basic set-up of one small guitar speaker, one small bass speaker and three not so small amp heads - I must use an attenuator to avoid me and my family getting evicted! I recorded everything in a room in our house using three different microphones, always just one at a time, and all the editing and mixing was done on my laptop.

Q: There’s a 'real' drum sound on the LP; did you play and record the drums at home yourself?

JM: At first I thought I might record everything with MIDI drums or drum loops but it didn’t take long until I felt the need of a real drummer on several songs. So I asked a childhood friend that I thought could fit well. For this we needed to record in a real studio so I booked Studio Cobra, where Free Fall recorded everything we did. It went well and he has since come to Stockholm from Karlstad once more, playing on nine songs so far. He played along to the tracks that were already recorded with drum loops, which were then deleted afterwards. That’s not too easy to do, but he did well and was really quick. I also asked another friend to play trumpet on one song and synthesizer on two, and asked my wife, stepdaughter and Kim Franson from Free Fall to sing backing vocals.

Q: Lyrically, what sort of subjects do you tackle on "Voices – Part 1" and do you enjoy this part of song writing?

JM: Lyrics are always slow, and quite painful, work for me and I tend to write them late in the process. Subjects this time range from pretty nonsensical stuff to my close friend’s mental illness and suicide. Most songs turned out pretty relationship-focused although that wasn’t my plan, that’s just where they ended up…I always let the atmosphere 'decide' where the lyrics may go.

JM: Yes, I recorded more songs than those that ended up on the album. I chose these seven to get the right length for a vinyl album and so they would work OK together. So Part 2 might not take too long to finish since there’s quite a lot more material that has already been worked on…

With many thanks to Jan for his time. For more information on how to order "Voices - Part 1" please check out the official Jan Martens Facebook page. LP cover art by Hans Selander at SelanderArt. For our in-depth feature on the story of the influential Nymphet Noodlers including a feature on their reunion showin December 2017 please check the Blog archive here.