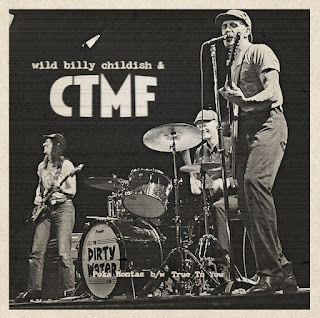 
It is a real coup for the Spinout Nuggets label to finally snag the lesser spotted Mr Childish and his Chatham Forts. I know label boss Grimmers is a huge fan of most things Medway (who isn’t?). Here Billy Childish and CTMF comprising trusty Wolf Howard on drums and wife/bassist/vocalist Julie Hamper, present two ‘re-energised’ tracks from his considerable back catalogue. These tracks were recorded at Ranscombe Studios for Marc Riley’s BBC Radio 6 show in February this year. Instrumental "Poka Hontas" (originally recorded in 1989 by Thee Headcoats) is exactly what I expected it to be and I’m happy to hear it again, but if you’re here looking for something different then you should really know better by now. That is not a criticism in any way, but for someone (i.e. me) who has grown up with and revered Childish in his various guises, it’s no surprise at all. In fact, it is the musical equivalent of putting on a pair of old moccasins (get it?) but nobody said that you can’t dance in them! It’s Garage, it’s Beat, it’s no frills Rock’n’Roll, and its jolly good fun along the lines of "Comanche" by Link Wray (1960) coincidentally also covered by Childish. Backed with the wistful "True to You". This time with Medway compatriot Mr Graham Day (of The Prisoners, Forefathers, Senior Service, Gaolers etc) on organ. Day and Childish having of course previously made beautiful music together in Thee Mighty Caesars and The Buff Medways. Again, no surprises thankfully! (phew, it wasn’t the ‘90s acid-house remix I’d had a nightmare about last night!) At a push I would say that I prefer the original and Thee Headcoatees version, but that’s just my personal taste. I remember a certain Mr Day jesting that Mr Childish only had one song, but what kind of a genius can keep on re-working the same tunes and still be as adored as he is? Possibly because there is no one quite like him, or maybe because he writes the best songs? Is he the antidote to today’s musical detritus? Maybe a budding beat girl or boy of the younger generation will hear this and discover the treasure trove that lies beneath? Whatever the answer, at the time of writing this, the single has already sold out at Spinout HQ. Punk Rock is not dead, thank bloody goodness for Billy Childish. 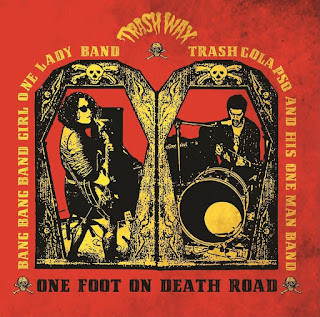 
Bang Bang Band Girl - One Lady Band aka Sheri Corleone, has been a presence representing the darker side of Rockabilly, Surf, Garage Punk and Trash Blues for a good few years now and she’s got talent in abundance. Not only does she write, play, sing, and produce most of her own material, she also hosts her very own internet radio show "It’s Monster Meeting Time" with the strapline ‘Whether going or coming from the grave, all monsters welcome!’ (which at the time of writing is on its 172nd show). I’ve much admired her doing her own thing and putting herself out there in a male dominated scene and I’m glad to see that the Trash Wax label have decided to release this split LP with her compatriot, Trash Colapso and his One Man Band. BBBG’s side of the LP opens with "Schizo". Sticking true to her grassroots, this heavy Bluesy number is thick with distortion and riffs. Her breathy vocal style is more ghostly than it is Marilyn Monroe, and she’s very fond of spooky theremin sounds as it reappears on a few of the tracks, but what’s not to be fond of? "Apache", a collaboration with Trash Colapso, is not the cover I was expecting, but it’s certainly got enough fuzz to give Davie Allan a run for his money. "Sweet Talk" is what I imagine a collision between Janis Martin (on acid) and Hasil Adkins would sound like. It’s difficult to pin BBBG down to a genre because she’s diverse within her Roots foundation. There are glimpses of twang, trash, good old Rock ‘n’ Roll, and echoes of bands such as The Birthday Party, Gun Club, The Cramps, Rev Beatman & Sister Nicole Garcia, The Flaming Stars, Bantam Rooster and The Detroit Cobras. All tied up with a David Lynch bow on top. Trash Colapso’s side is, as you would expect, of a similar lo-fi, stripped back sound. His bandcamp page sites his influences as The Stooges, Black Sabbath, Hasil Adkins, Suicide, The Cramps, and Pussy Galore and I definitely get some of those throughout. However, it just doesn’t quite have the same kind of enchantment as BBBG’s side. With songs such as "Snake Woman", "White Trash" and "Alligator Wax" it’s all a bit Americana. "Black Charm Boogie" is probably the most melodic offering and is my favourite from the six. Being a one-person band is something that often works much better live and in front of a crowd, for me at least. But who knows when that will happen again? - Ms Sheringham-Boom, September 2020

Thank you to Ms Sheringham Boom - please click the highlighted links for further information. Ms Sheringham-Boom is the bassist in Edinburgh's premier purveyors of Garage Rock, Thee Girl Fridays. Don't forget our special edition Retrosonic Podcast with Billy Childish is available to listen/download from iTunes/Apple Podcasts, our Soundcloud archive or directly below: