Girlsville: The Story of The Delmonas & The Headcoatees - The Queens of the Medway Delta by Saskia Holling (Spinout Publications) Review by Ms Sheringham-Boom 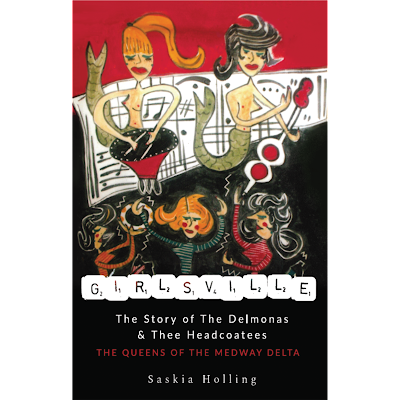 I have been waiting for this book "Girlsville" for what seems like forever so I was over the moon to find a copy dropping through the letterbox a few weeks ago. Before I go any further, I should declare that I was asked to contribute to the book by the author Saskia Holling. I was thrilled to be asked and it was an absolute honour to be part of a book that so badly needed to be written. Saskia had mentioned that she was in the process of writing a book about women involved in the Medway music scene, one of the main reasons being that unfortunately these women had mostly been ignored or only briefly covered by previous authors. For example, "The Kids Are All Square - Medway Punk and Beyond 1977-85" (pre-Headcoatees times) by Bob Collins & Ian Snowball does mention The Delmonas somewhat in passing yet none of the female voices of the band are heard, Maybe they weren’t asked to contribute, who knows? I haven’t read "Do It Yourself: A History of Music in Medway" by Stephen H Morris, so can’t comment on that, but have sadly heard similar things said. Time to put that right? You bet. Saskia herself has been involved in music since the 1990’s and the book gives the reader a glimpse into her own musical life having made her escape from a small Scottish island to form her Riot Grrl band Sally Skull. She then went onto Lord Rochester and Big Russ & Lightnin' Hollins (with her partner Russ Wilkins of The Milkshakes and The Wildebeests) and latterly The Nettelles. Indeed, not a musical heritage to be sniffed at.

Here she relates the stories of the women of two of the most important bands in post-1960's U.K. Garage & Beat history, The Delmonas and Thee Headcoatees. Meet Hilary, Louise, Sarah, Debbie, Holly and Kyra. The story of these wonderful women (told in two parts) is warm, amusing, dark, joyous, and lots in-between. Saskia has clearly gained the trust of these women and there is a stark similarity in their musical experiences. The frustration, the not being heard and to a certain extent of being controlled. Regrets and resentments can be expected, such is band life. I shed tears when I read these stories because there was a side of their musical lives that I had not anticipated. They were and always will be so much more than the sum of a Billy Childish project. Saskia has evidently carried out her research very thoroughly and has firmly put their stories into context by including musical reviews from those times, not only reviews of their bands, but of a wider variety of female musicians. It clearly shows the pervading misogyny of the male music 'journos' of that era and whatever one’s musical tastes, it makes for very uncomfortable reading. I’m happy that these women found their own ways of being creative. They have all since (and with Debbie The X-Men before) blessed us with numerous musical treasures such as The A-Lines, Ye Nuns, and The Buffets (to name a few) as well as Holly, Sarah and Kyra’s solo careers, in fact a new recording from Kyra is in the offing which is certainly something to get excited about. From start to finish "Girlsville" is an unputdownable read and I must mention the striking cover art provided by Sarah Crouch. Props also to Saskia for including a comprehensive discography, links and references and the book features many previously unseen photos of the band on and off stage, record covers and more.

With many thanks to Ms Sheringham-Boom. Ms Sheringham-Boom is the bassist in Edinburgh's premier purveyors of Garage Rock, Thee Girl Fridays. The book is the first from our friends over at Spinout Publications and you can buy a copy directly from them at their on-line store here. For your listening pleasure don't forget our Medway music related Retrosonic Podcast interview specials with Billy Childish, Ian Greensmith (Vic Templar), Graham Day, Wolf Howard, Allan Crockford & Viv Bonsels of The Galileo 7 and Ian Ballard from Damaged Goods Records. All episodes can be downloaded at our Soundcloud site or streamed/listened to at Spotify or Apple Podcasts all for free.