My Favourite Records Part 1: 7" Vinyl From The Singles Box

Inspired by the great Art of Pete McKee and Morgan Howell at SuperSizeArt, I sifted through my 7" vinyl and you know what, they are works of Art! Something about the beauty of a 7" Single, the touch and smell of the thing - even before you get round to the music itself. I thought I'd scan some of my record collection, just to show the kids today what they might be missing with their MP3s...! 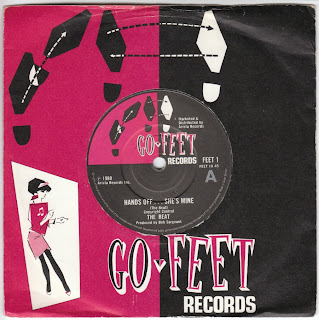 The Beat A-Side "Hands Off She's Mine" AA-side "Twist & Crawl" Go-Feet Records 1980.
An absolute belter of a single, a real Double A-Side with the perfect sleeve too - and a logo that I think I actually had a crush on...! The Beat are often overlooked amongst all the (justified) acclaim heaped upon The Specials and Madness, but to be honest I thought The Beat were far the best of all the Post-Punk Ska Mod and 2-Tone bands! 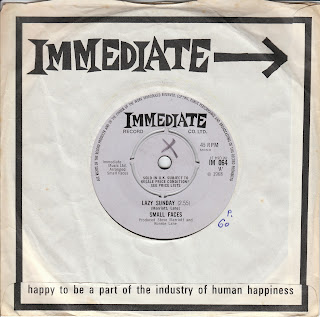 Small Faces "Lazy Sunday" Immediate Records 1968.
Not my original purchase of course - I was only 3 when it was released...but I had to track down a Small Faces Immediate 7" Single. I paid a bit more than the 60p you can see written on the sleeve that's for sure! I think a few bands might dispute the claim of the record industry being the "industry of human happiness" though! 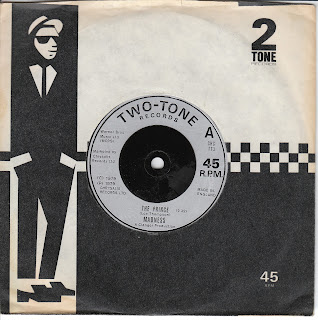 The Classic 2-Tone sleeve, probably the coolest logo and image of all the record labels I think - Stiff, Trojan, Go-Feet, yeah all great, but this is the top dog! 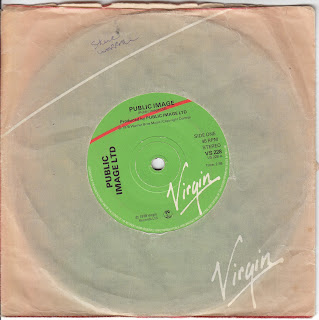 A bit embarrassing that I'd written my name on this...but I had to stop it getting nicked by my schoolfriends! It was in great demand for a "borrow", it blew us youngsters away, probably far more shocking musically than anything the Pistols ever did...Pure genius music and hard to believe that The Sex Pistols had finished and John Lydon had got round to releasing this by 1978.
Posted by Retro Man at 23:32