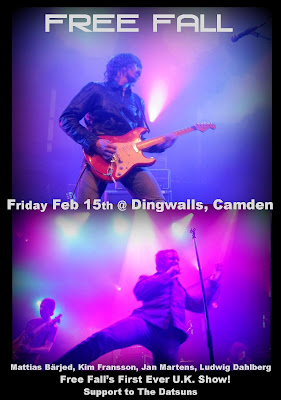 Free Fall, the Swedish Heavy Rock "Super-Group", will be making their very first live U.K. appearance this Friday, February 15th at Dingwalls in Camden, London as support to The Datsuns.


Free Fall's debut album "Power & Volume" is out on February 22nd on Nuclear Blast Records. Free Fall were started by guitarist Mattias Bärjed – while playing guitar with The Soundtrack of Our Lives - as he felt the urge to form a classic four piece band (drums, guitar, bass, lead vocals), that would play straight-up heavy Rock 'n' Roll. As far as a musical direction, there was a clear intention to sound like a mix between early Van Halen, The Stooges and The Who. Other obvious influences on the band would be rock classics such as Led Zeppelin, UFO, AC/DC and Judas Priest to name a few. First in line to join the band was long time friend and ex-Nymphet Noodlers band-mate Jan Martens on Bass, who was to be joined shortly after by Drummer, Ludwig Dahlberg (ex-International Noise Conspiracy and Mattias Hellberg's White Moose). The last and very vital piece of the Free Fall puzzle was lead singer Kim Fransson, who has that raw vocal style of Steve Marriott and Bon Scott.

The latest issue of Classic Rock magazine has a full page feature on the band and the track "Free Fall" is at Number One on their "Heavy Rotation" chart. You can also check out the Retro Man Blog review of Free Fall's May gig at La Gaîté Lyrique, Paris here and read all about Mattias Bärjed's soundtrack to the new political thriller "Call Girl" here. Also available to listen to and download for free is our exclusive interview with Mattias on this very special edition of Retrosonic Podcast.