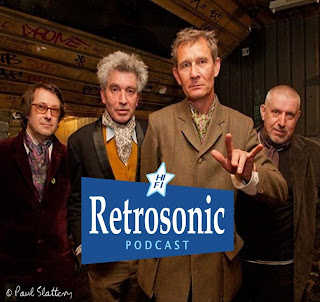 Retrosonic Podcast are proud to present The Fallen Leaves story. On the A-Side "Punk Rock for Gentlemen", Steve from Retro Man Blog and Rock Photographer Paul Slattery chat to Rob Symmons and Rob Green from the band about their music and history. This episode is not only crammed full of superb Fallen Leaves songs from all of their releases, but we also discuss and play some of the band's favourite tracks and influences from the Ramones, Trini Lopez, Buff Medways and Dr. Feelgood. Along the way we will meet some of the characters the band have rubbed shoulders with over the years including Vic Godard, Billy Childish, Bernie Rhodes, Joe Strummer, Malcolm McLaren, Paul Cook and more...So slip on your smoking jacket, pour yourself a cup of tea, get yourself comfortable on your chaise longue and prepare for some fine "Punk Rock for Gentlemen!"


Here's the B-Side to The Fallen Leaves story: From their first gig at the home of London football to the Parliament Club featuring a guest appearance by a short Rolling Stone. From secretly using their 5 hours rehearsal time in Pete Townshend's Eel Pie Island to record the whole of their first E.P. to being lauded as "Style Icons" by Johnny Marr - this episode is generously soundtracked by loads of great Fallen Leaves songs and some more of their influences and favourite tunes...The Who, T-Rex, Prince Buster, Roxy Music, John's Children...and Rolf Harris...! Expect some rather splendid "Simple Songs for Complex People!".

The Fallen Leaves are playing a session on BBC 6 music tonight, Monday March 25th at 7pm on the Marc Riley Show, live in the studio as you hear it, plus interview. It will be available on BBC I-Player too. Photographer Paul Slattery will be joining the band on their trip so hopefully, BBC permitting, we will be able to bring you some photos of the proceedings as soon as possible.
﻿
﻿The Fallen Leaves played the proverbial blinder at last Friday's excellent "Some Weird Sin" Club night at the Buffalo Bar in Islington. Although I've been to the Buffalo Bar before, it was the first time at one of the Some Weird Sin events and I can thoroughly recommend it. Great value too, you got The Fallen Leaves and the energetic Glam-Punk of Jonny Cola & The A-Grades, who were so lively that they made me feel a bit old and in need of a sit down. DJ Heidi Heelz played a cracking selection of old-school Glam and Punk Rock, that perfectly complemented the live bands, I look forward to going along again in the future...they do great flyers too. The Fallen Leaves were on top form and Rob kindly mentioned Retro Man Blog, which was a pleasant surprise. The enthusiastic calls for an encore were acknowleded by the DJ, and the band returned to treat us to the superb "Sylvie Says". It was a great show, full of their trademark theatrics, humour and some of the best Garage Rock songs you'll ever hear. One happy member of the audience turned to me after their set and said that The Fallen Leaves were "London's best kept secret"...well let's hope tonight's BBC Radio session goes someway to addressing that. 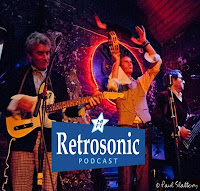 Thanks to Caz Hellbent for the great photo of Rob Green. Caz is not only "Some Weird Sin's" resident photographer, but she is also in two different bands - singing and playing guitar with "Yeah And She Has Red Lips Too"  and also drumming for "Desperate Journalist". Please check out her bands and the "Some Weird Sin" Facebook page to see more of her excellent Fallen Leaves photos and more...

Don't forget to check out the Retrosonic Podcast Soundcloud page for more Special Editions, including TV Smith from The Adverts, JC Carroll from The Members, The Soundtrack of Our Lives, Swedish singer-songwriter Mattias Hellberg and much more. There are also the regular episodes where Steve, Paul and Adam play an eclectic selection of Punk, Garage Rock, Psych, Mod and Soul nuggets and generally get drunk and waffle on a bit...

The Fallen Leaves will play their regular "Minimum R 'n' B" Club night at Denmark Street's 12 Bar Club on Wednesday April 03rd. Thanks to Paul Slattery for the Fallen Leaves Podcast covers.