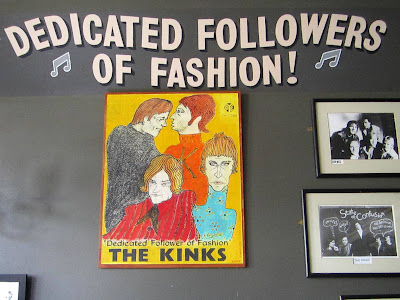 Inspired by the recent showing of Julien Temple’s “Imaginary Man” documentary about Ray Davies on BBC4, I decided on a DIY excursion of Kinks related landmarks in North London. The film followed Ray strolling through locations from his life and being interviewed in venues that had played some part in The Kinks story. The fact that most of these venues seemed to be pubs made it a quick and easy decision to try and re-trace his steps! So a little band of trusty Kinks (and pub) appreciating friends and family joined me and my meticulously planned itinerary on a lovely sunny afternoon, no time for lazing though… 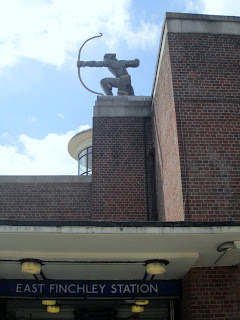 We started off at East Finchley underground station, which is in itself a wonderful Art Deco design. In the film you can see Ray walking underneath the stunning sculpture of a kneeling archer on the station’s roof. Just up on the opposite side of the road, Ray is interviewed in front of another 1930’s Art Deco masterpiece, The Phoenix cinema. This was one of the first in the country to be built specifically to show films, as opposed to the usual concert halls or ballrooms. 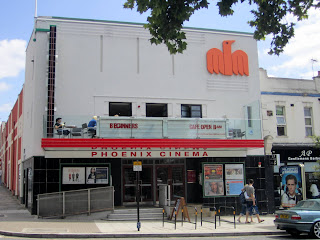 It’s then a walk up the High Road and a right turn onto Fortis Green and after a short stroll we come to the first and probably most important landmark, Number 6 Denmark Terrace, the Davies old family home. What strikes me first is that the house is tiny, and considering Ray and Dave had six older sisters, it’s hard to imagine how they all squeezed in. The documentary features some great old home-movie footage shot in the house showing a happy, boozy family gathering around the piano on which Ray would later write the riff to “You Really Got Me”. 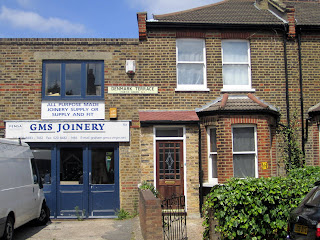 Directly opposite is the Clissold Arms, the pub where Ray and Dave made their first public appearance as musicians. I’d heard that this had been turned into a gastro pub and was expecting the worse, but it was excellent. 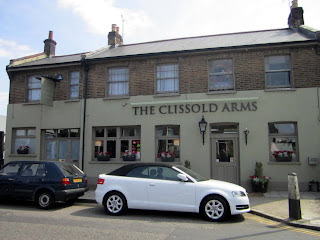 There’s no hiding away a couple of old snap-shots of the band in a back room to avoid upsetting the rather well-heeled clientele, no way! The first thing you see when you walk in is the Kinks Room, a whole room dedicated to and decorated with all things Kinks, it was fantastic, more of a gallery or museum than a bar in a pub. 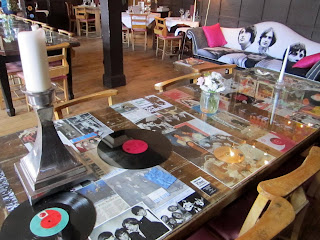 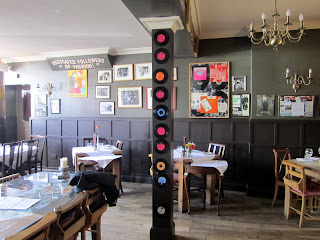 The room is decorated with loads of old posters, record sleeves, vinyl and memorabilia – there’s even a marvellous Kinks sofa that you can sit on to enjoy a pint. Yes, the pub is pricey and more geared towards the food, but it was very well done and I was impressed with the way they had embraced the Kinks links and provided an excellent destination for fans of the band. 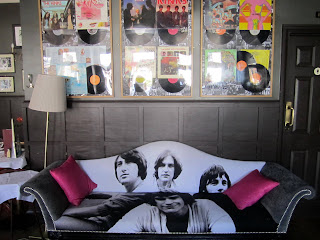 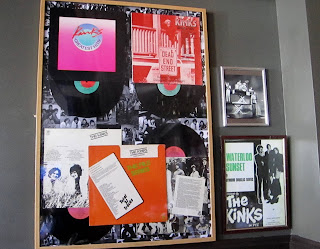 It would have been very easy to have stayed there all afternoon enjoying the great food and yet another pint in the sunshine, but there was no time for rest, onto the next location. Straight down Fortis Green and a left turn onto Spring Lane is Fortismere School, or the William Grimshaw as it was known at the time. This is where Ray and Dave first met Pete Quaife and started their first band together named The Ravens. Actually, Rod Stewart also attended the same school and was once considered as a singer for the new band before Ray had the confidence to take the lead vocals. 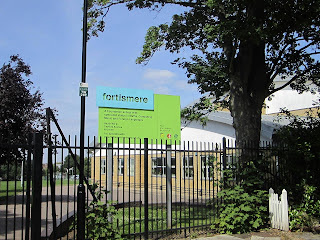 Then we reach a fork in the road and take the right turn onto Fortis Green Road where you will soon come across Les Aldrich Music at number 98. In the documentary Ray is seen going into the store and explaining that he came in here and bought a copy of his own single “You Really Got Me” on its’ release. 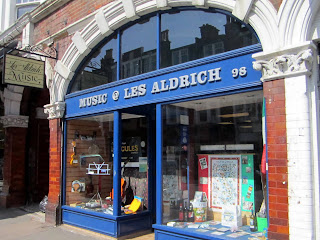 Then follow Ray’s route past the church and left onto Muswell Hill Broadway, stopping at the top of Hillfield Park with the HSBC bank on the corner. Here you will get a spectacular view down onto East London. You can see the new Olympic Stadium and Canary Wharf and understand how, living in this elevated position, the views of London from Muswell Hill, Hampstead and Primrose Hill must have had such an effect on Ray’s song writing. 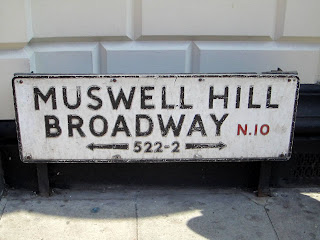 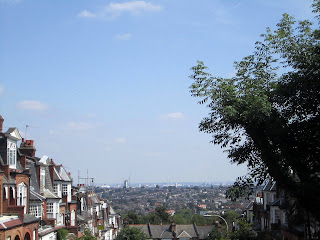 Then at the end of Muswell Hill Broadway go right down Muswell Hill, cross over and take the 144 bus past Alexandra Palace to Tottenham Lane. Get off before the railway bridge and walk down to the bottom where you will come across Konk Studios. It’s a very unassuming building and there’s a big For Sale sign outside, although I understand that that there might yet be a reprieve. Opened in the early 70’s as the band’s own private studio, Konk later opened its doors to other acts as diverse as The Bee-Gees and Thin Lizzy to Stone Roses, Suede and Arctic Monkeys amongst many others. 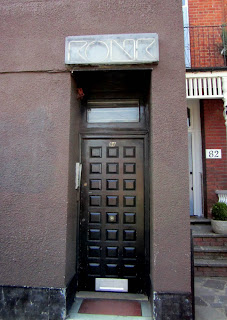 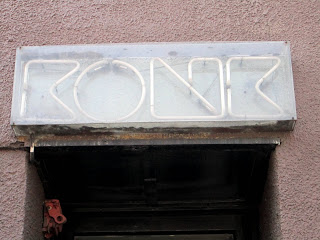 Here we had a bit of a dilemma as we had to make a choice between going on further down to the Hornsey Town Hall, main focal point of the documentary where Ray is interviewed on stage playing guitar and piano, or having a breather and another beer. We settled on the latter and at the Lane Café, which could have been an inspiration for “Working Man’s Café”, we got on the 41 bus to Archway. 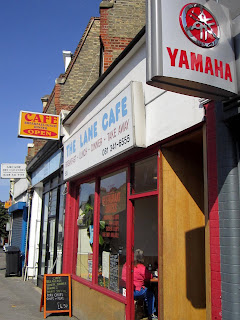 The Archway Tavern, famous location for the Muswell Hillbillies album cover is a bit of a disappointment, the interior has changed a lot from the well known photo on the record’s sleeve and you might want to move on to the next destination quickly. Cross the busy road and catch the number 210 bus from the stop opposite the Tavern towards Highgate. 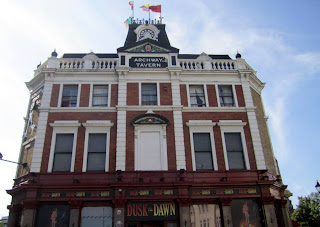 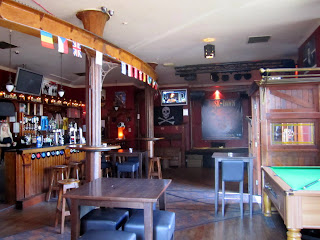 We pass Dick Whittington’s cat monument and, as if by magic, the bus stop is perfectly located right outside the Prince of Wales at 53 Highgate High Street. Ray is interviewed in the back bar of this excellent pub recounting tales of drunkenness and affairs with the Landlord’s wife. It’s a great boozer, with some wonderful ales, friendly staff and a nice little terrace outside at the rear. 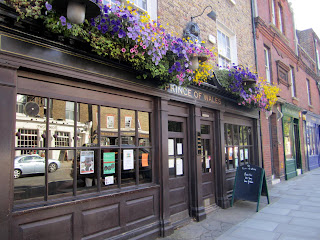 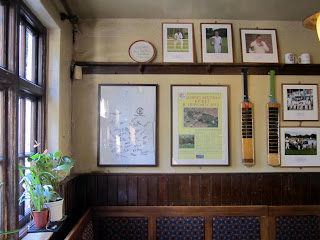 So, that’s where we ended the North London leg of our little Kinks excursion, just a shame that we had to miss a few places out. However, it does mean that we have a reason to go back and fill in the few gaps left – or just stay and enjoy the beers at the Clissold Arms and Prince of Wales! 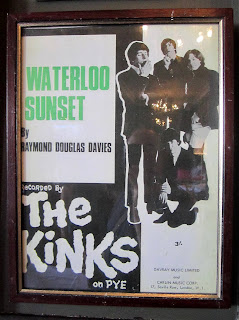