﻿﻿﻿Free Fall, the Swedish Heavy Rock "Super-Group", has just announced a record deal with Nuclear Blast Records. Free Fall was started by guitarist Mattias Bärjed – while playing guitar with The Soundtrack of Our Lives - as he felt the urge to form a classic four piece band (drums, guitar, bass, lead vocals), that would play straight-up heavy Rock 'n' Roll. As far as a musical direction, there was a clear intention to sound like a mix between early Van Halen, The Stooges and The Who. Other obvious influences on the band would be rock classics such as Led Zeppelin, UFO, AC/DC and Judas Priest to name a few. First in line to join the band was long time friend and ex-Nymphet Noodlers band-mate Jan Martens on Bass, who was to be joined shortly after by Drummer, Ludwig Dahlberg (ex-International Noise Conspiracy and Mattias Hellberg's White Moose). The final, last and very vital piece of the Free Fall puzzle was to find a lead Vocalist. And not just any vocalist - but a guy that could deliver the very high standard in over the top vocals that the band was looking for to front Free Fall.﻿ The word hit the streets that the band was looking for a vocalist in the school of Steve Marriot and Bon Scott. 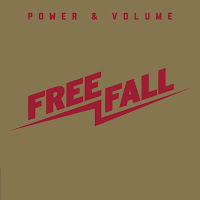 After some time, help was found from Mattias and Ludwig's long time friend and producer Don Alsterberg (Graveyard, José Gonzales etc). Don claimed that he knew a guy called Kim from his hometown that he was sure was the right guy for the job. Kim Fransson showed up at rehearsals, the band jammed a couple of songs and the rest will be history. After signing a deal with Nuclear Blast, the band went into Studio Cobra in Stockholm and have, together with producer, engineer and mixer Martin Ehrencrona, recorded an album that will show the world what Free Fall and their "Freedom Rock" is all about - Power and Volume!

"Power & Volume" is scheduled for an early 2013 release. However, a first impression of what their Freedom Rock is all about will be due on November 30th 2012 when the band release the 7“ Single of the album's title track. "Power & Volume", the single, will be made available on black (retail version) and white vinyl (Nuclear Blast Mail order only) as well as digitally via iTunes. All versions of the single will also feature the non-album track, "Stand Up For Your Rock 'n' Roll".
﻿
﻿Free Fall will be opening for Gothenburg band and labelmates, Graveyard, in Oslo, Norway on November 8th and in Malmö, Sweden on November 15th.


You can also read all about Mattias Bärjed's soundtrack to the new political thriller "Call Girl" here.