The Fallen Leaves: Passion over Precision

We are delighted to welcome The Fallen Leaves to our Retro Man Blog night at the legendary Half Moon, Putney on Friday December 07th. The band will be joining our superb line-up of DJ Jeff Munday, along with The Past Tense, The Legendary Grooveymen and our headliners The Len Price 3, for a top night of melodic Garage Rock 'n' Roll. The Fallen Leaves were formed in 2004 by guitarist Rob Symmons and bassist Paul Myers from the original Subway Sect. They were joined by ex-Sex Pistols drummer Paul Cook and vocalist Rob Green. Originally, Symmons and Myers, along with Vic Godard, were founding members of Subway Sect. During the recording of their first album, manager Bernie Rhodes sacked the band in the hope of concentrating on solo success with singer-songwriter Vic Godard. Myers went on to play bass with Paul Cook and Steve Jones in The Professionals following the break-up of The Sex Pistols. Symmons gave up on music for over twenty years until persuaded out of retirement by old friend, Rob Green. Green had built a reputation singing at Bernie Rhodes' "Club Left" and by performing with Vic Godard's later version of The Subway Sect.

Green and Symmons had been writing songs together on various occasions and in 2004, spurred on by a shared love of 60's Garage, stylish vintage suits and their long-held belief that a good idea played badly is better than a bad idea played well, got into action. The first incarnation of The Fallen Leaves featured Symmons' ex-Subway Sect colleague Paul Myers on bass and, for a number of their early rehearsals, Paul Cook on drums. Various drummers and bassists have passed through the band's ranks over the years including ex-Lush bassist Phil King and former High Llamas drummer Daniel Strittmatter but the ever-present Symmons and Green are now joined in the current line-up by bassist Matthew Karas and drummer Bill Lewington. The band recored their first E.P. "Trouble" in Pete Townshend's Eel Pie Studios near the band's hometown of Richmond, and this was released in 2006 on the band's own Parliament Records.
﻿

The band's debut album "It's Too Late Now" was released on Parliament to critical acclaim in the spring of 2008, and then they crossed the Atlantic to play two shows in New York and record a session for WFMU Radio. The Fallen Leaves play with passion rather than precision and are based around Green's Italian-American crooner-influenced vocals over Symmon's distinctive discordant guitar sound. They prefer to use vintage valve amps and mics and record live without overdubs to conjur up the classic sound of British R 'n' B Beat groups such as The Pretty Things and The Downliners Sect. The second album featuring ten excellent tracks is out now, it's called "That's Right" and is available from the official web-site store. The band also put on regular Parliament Club nights, something they have been doing since they formed back in 2004, and have hosted many great bands including T.V. Smith, The Past Tense, The Len Price 3, Billy Childish, The Masonics and John's Children amongst others. The Parliament Club runs the first Wednesday of every month and the current location is Denmark Street's 12 Bar Club, the next Club night will be on December 05th where the band will be appearing along with The Mynd Set, The Transients and others. The Fallen Leaves also play tomorrow Thursday November 29th at the Buffalo Bar in Islington, along with The Masonics. 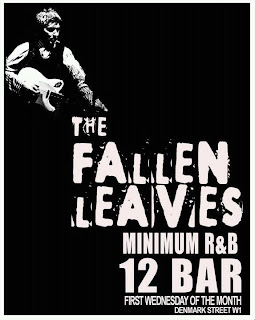 With many thanks to Svenja Block for the excellent photographs, please check out her site HERE.