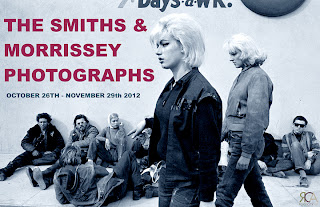 Retro Man Blog's regular contributor and resident rock photographer Paul Slattery, has some of his excellent Smiths photos included in a new exhibition at Bedford's Rock City Art Gallery. A career spanning exhibition entitled "The Smiths and Morrissey Photographs", the show features well known classic images, such as Stephen Wright's shot of the band outside the Salford Lad's Club, alongside more obscure, lesser known photos. You can see Mark Allan's shot of Morrissey on stage holding a union jack flag, an image that was to be used as a famous NME cover. There are contrasting portraits of the band shot by Paul Slattery, solo photos by Peter Anderson and recent shots of Morrissey taken by Pieter M. Van Hatten. The show opened at the end of October and runs until November 29th, entrance is free.

﻿The Rock City Art Gallery was founded by leading UK music photographers Mick Hutson and Andy Willsher. The idea evolved from the phenomenally successful Six Shooters shows of 2010 which inspired them to create a gallery for photographers run by photographers. 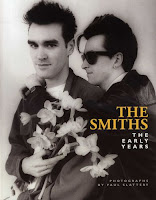 Paul Slattery's excellent photographic book "The Smiths: The Early Years", which was published by Omnibus Press, has been re-printed. The beautifully presented book features many iconic shots, including the band posing with flowers in the ruins of the Central Manchester Railway Station (now the G-Mex), candid backstage photos and live shots documenting the first murmurings of the soon-to-be hysteric crowd reaction, to the main stage at the 1984 Glastonbury Festival via the back streets of Montmartre in Paris. There are also many candid off stage photos, many of which are previously unpublished. The book is available in all good bookshops or on-line via Amazon. You can follow Paul's "Adventures in Rock Photography" in our special series of the Retrosonic Podcast and Paul  will be talking about his experiences of working with The Smiths in a future episode. You can listen and download the first two episodes in the series for free at the Retrosonic Podcast Soundcloud web-site. Please keep a check on the Blog, Facebook or Twitter page for news on release dates.
Posted by Retro Man at 11:22