The Soundtrack of Our Lives at Slussens Pensionat Part 1: The Venue and Ebbot The Movie

Slussens Pensionat, located on the island of Orust on the beautiful Bohuslän coastline, was originally a Herring cannery built in 1926. The fish were landed directly from the lake and the original long table where the fish were cut, is actually still at the Hotel and currently being used as the breakfast buffet table on the restaurant's veranda. In the early 1930's, the factory went bankrupt and was bought by an enterprising woman from Anfasteröd on the other side of the fjord. Alfrida Andersson had worked a long time on the steamboats that went into service on the Slussens lock and was impressed by the factory's beautiful location in the bay. She built a porch and an annex on the hill, furnished rooms and painted the whole building in a glorious white. Affluent residents came to stay on a full or half board package to take an invigorating salt bath and enjoy Alfrida's famous cuisine.

When Vibs and Robert Sohlberg first visited Slussens Pensionat in 1987, it was a Guest House run by a small non-profit cultural organisation which put on art exhibitions and music evenings. The couple were only meant to stay for the summer, but after working hard in the restaurant they liked it so much they decided to buy the place! For the first ten years, the Pensionat was run purely as a summer resort, but since 1997, the hotel and restaurant are now open almost all year round for conferences and weekend guests. Now, 25 years since their first visit, Vibs and Robert, have overseen the gradual evolution of the Pensionat into a 30 bedroom hotel, beautiful waterside restaurant and conference centre. There is a big emphasis on providing organic, local seasonal produce and running the venture as ecologically friendly as possible. But it's in continuing with the tradition of live music at the Pensionat where Vibs and Robert have truly excelled. With Robert being a musician himself, performing under the name Big Is Less, they could call on some of their contacts from the Gothenburg music scene to create what must be one of the most stunning music venues in the world.
﻿ 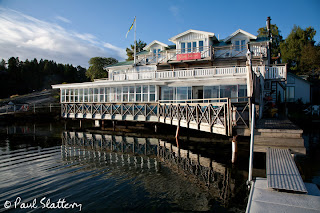 The concept of presenting the bands and artists in such an intimate setting, along with the choice of dining in the beautiful restaurant before the show, has proved an enormous success. There is always a full programme of music throughout each summer and artists such as Freddie Wadling, Nisse Hellberg from Wilmer X, Nationalteatern, Moneybrother, Timo Räisänen, Christian Kjellvander and Augustifamiljen amongst many more, have all appeared. I am certain that I will return to Orust one day to get my fix of the wonderful hospitality and the beautiful surroundings regardless of whether The Soundtrack of Our Lives decide to get back together or not. Although I have a feeling they might find it difficult to resist the lure of Slussens Pensionat too!

The Soundtrack of Our Lives were so taken with the venue that they decided to use the Pensionat and the beautiful surrounding Orust countryside as the location for their excellent fantasy documentary "Ebbot The Movie". The film, somewhat ironically now as it was released in 2004, features a journalist trying to track down the various members following the band's (fictional at the time) split. They do eventually get back together to perform a storming set at the Pensionat. Let's hope this is a good omen! "Ebbot The Movie" is a delightful film, whimsical and fun, but with some amazing live performances running through the narrative. Of course there is also the added bonus of the beautiful Slussens scenery which almost threatens to become the star of the show. Here's a clip from the Swedish TV mock-documentary "Ebbot The Movie" - this pretty much sums up what the Slussens Pensionat shows are all about. Starting off as a quiet semi-acoustic dinner show and quickly descending into a crazy all action freak-out with dancing on the tables and loads of audience participation...

Here's a great photo of Ebbot by Nellie Selander taken at the very last Slussens show.

Steve from Retro Man Blog chats to Ian Person, guitarist of The Soundtrack of Our Lives, just before their last ever show at the Slussens Pensionat. We concentrate on Ian's solo music and his work on the soundtrack of the new IFK Gothenburg documentary movie "Fotbollens Sista Proletärer", and Ian discusses the decision to split The Soundtrack of Our Lives at the end of 2012...
The Podcast also features clips of some of Ian's solo and soundtrack music, including two excellent brand new and unreleased  songs.