The Len Price 3 - On location with the band filming for the forthcoming movie "Pubmonkey"... 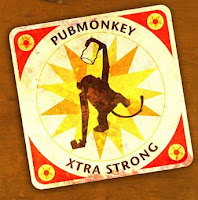 Retro Man Blog's favourites The Len Price 3, will be providing the theme song and incidental music to the forthcoming movie by writer Jamie O'Hara and Director Jean-Claude Deguara entitled "Pubmonkey", and they will also be making an appearance as "themselves". Pubmonkey is a pleasantly dark comic tale of a depressed shoe shop assistant  who's strategy upon hearing that his girlfriend has been kidnapped, is to call on a group of unhinged characters from his heavy drinking past in order to mount a rescue mission. Retro Man Blog was lucky enough to be invited along to the final day's filming and wrap party, where the band treated us to a full show once the filming had been completed. First of all here's a brief synopsis of the movie: Eddie is the Pubmonkey - amateur philosopher, chronic loser, Sinatra fan and shoe shop employee whose only discernible talent is entertaining lowlifes for free drinks.

One morning he receives a phone call from an irate addict known as Loony Noonie saying that he has kidnapped his girlfriend and is demanding his cocaine back. Eddie knows nothing about the cocaine or why his girlfriend has been taken. He decides to rally a bunch of people from his colourful but essentially pointless past in a bizarre rescue attempt. Firstly he calls upon his former flatmate, the ultra-violent obsessive-compulsive debt collector Bingo, who plies him with pot and takes him to his mother’s house for a birthday party. After this bizarre event he heads to The Elephant and Flute pub to recruit the various crooks and chancers known as The Berts who operate as a building firm with whom he briefly laboured for. As the story unfolds, the hostage situation becomes increasingly horrific as Loony Noonie, and his demented henchman Dodgy Roger, become increasingly intoxicated and unhinged. Meanwhile Eddie begins to discover just how many of the people he knows are already involved in the deal...

I asked Writer Jamie O'Hara what made him choose The Len Price 3 to provide the music. "We’d done about seven or eight days of principle shooting for Pubmonkey and it was about time to start seriously thinking about music. I’d followed The Len Price 3 for a few years and thought they were one of the best and most underrated bands around. We thought it was a bit of a long shot to get  them involved, but we thought they'd be a perfect fit. The original script for Pubmonkey had been inspired by the same kinds of Medway misfits that informed their work. It was suggested that we'd ask them for one song, while we hoped to get them to do more, to use their music almost like another character. We thought it would be good to apply the band’s knack for writing songs that are sometimes like mini-rock-operas to a wider palette.

Thankfully, they liked the script, so we met for a pint in a dingy Medway boozer and they agreed to work with us. They delivered "Swing Like a Monkey" shortly afterwards which everyone agreed was a perfect fit for the main theme, with its seedy Mancini-esque organ line and typically brilliant lyric. When it came to shooting the final scene, we'd always hoped to use some footage of the band. To cast them as themselves, playing a function band, capturing their unique look and a bit of their humour,  while attempting to get a sense of their boundless live energy. Thankfully they agreed and we shot the scene at the end of last month. The rushes look great. Even better was the chance to catch a live set from them, demonstrating just how good a live act they are to those in the cast and crew that remained unacquainted with their shows". Work on the film is now firmly moving into post-production with some pick up shots, editing, grading, sound and scoring.

Jamie hopes to have a cut ready for screening by the middle of 2013 when they will be hitting festivals and arranging distribution. For updates on the production and news of the official website and when you’ll be able to see it, you can keep an eye on the film's Pubmonkey Facebook Page.

Don't forget The Len Price 3 headline the Retro Man Blog night at The Half Moon, Putney on December 07th ably supported by The Past Tense, The Fallen Leaves and The Legendary Grooveymen. Click the poster to the right of the page for more information and tickets.