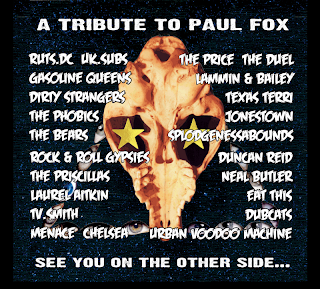 The Paul Fox Social Club have announced the November 16th release of "A Tribute to Paul Fox", the legendary guitarist with The Ruts, who sadly passed away due to cancer in 2007. The twenty four track compilation boasts some of the biggest names in Punk Rock, it's available from Foxy's web-site and hopefully at gigs by the featured Artists. The album features a mixture of previously released material along with exclusive live and studio recordings from Bands and Artists including Ruts DC, UK Subs, Chelsea, The Priscillas, TV Smith, Duncan Reid of The Boys, Texas Terri, Menace, The Phobics, The Urban Voodoo Machine and Laurel Aitken amongst others. The album was mastered by Chris Kimsey at Olympic Studios and the cover art has been designed by Gaye Advert. The idea behind this charity compilation came from the simple desire to help raise more funds and continued support for the Michael Sobell Hospice who made Paul's life more comfortable during his terminal illness. Profits will be added to those raised by The Paul Fox Social Club, which is an annual fund raising event for the Hospice. The Club was originally set up a few weeks after Paul passed away by family and friends to celebrate the life and career of one of the most energetic, versatile and influential guitarists of his generation. Every year since 2007, on or around October 21st, an annual gig is arranged to raise funds for the Hospice to say thank you for the palliative care received by Paul during the final months of his life.

Michael Sobell Hospice is a specialist centre at Mount Vernon Hospital, Northwood, Middlesex. The hospice is a 16 bed In-Patient Unit, Day Therapy Centre and Outreach Service as well as providing a wide range of complementary therapies. There is no charge for the care they provide but Michael Sobell Hospice relies heavily on charitable donations. It costs £6,000 a day to maintain their current levels of care, £2,500 of which is provided by fund raising. For more info please check out the Michael Sobell Hospice web-site or the Paul Fox "Foxy's" web-site. 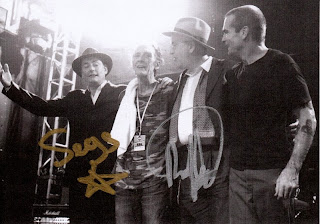 For me, The Ruts were always one of the best of the second wave of Punk Rock bands, and their appeal was mainly down to Paul Fox's guitar work. Their debut, "The Crack", was certainly one of the most diverse and exciting of all the Punk albums, and probably only America's Bad Brains could play such great reggae one minute and then such visceral aggressive rock the next. A hugely exciting future was so tragically cut short when vocalist Malcolm Owen died of a drug overdose in 1980 and the band decided to continue as Ruts D.C. playing mainly dub reggae. Unfortunately they never reached the heights of the original Ruts but the band, and Paul Fox in particular, remained hugely influential and popular. In 2007 it was announced that The Ruts, Paul Fox on guitars, bassist Segs and drummer Dave Ruffy would reform for the first time in 27 years, with Black Flag legend and huge Ruts fan, Henry Rollins taking over the vocal duties.

I remember there was a moment of euphoria when I first heard the news, the chance to hear those classic songs again, and as a big fan of Black Flag I thought that Rollins was the perfect choice to do justice to the legacy and memory of Malcolm Owen. The euphoria dissipated quickly when I found out that the reunion gig, to be held at the Islington Academy on July 16th 2007, was a benefit for the Ruts very own Paul Fox, who had been diagnosed with terminal lung cancer. It was terrible news but the gig was a huge success, a joyous yet highly emotional celebration. It must have been very daunting for Rollins to try and fill the Dr. Martens of Malcolm Owen, but he took to the task extremely well. Showing the perfect balance of respect for Malcolm, the band and the audience along with an impressive knowledge of the material and compassion for Paul. Yet you could feel the unbridled honour and joy of a fan's dream come true, the rare opportunity to actually perform with their heroes. A stellar line-up compered by John Robb, including the UK Subs, The Damned, Tom Robinson, TV Smith, Tenpole Tudor, Splodgenessabounds, John Otway and fittingly, Southall's Misty In Roots, all played short sets and paid tribute to Paul Fox and The Ruts. Then it was the moment we had all been waiting for and Rollins, Segs, Ruffy and a frail looking Fox took to the stage to an amazing reception and tore into "Something That I Said", closely followed by "Staring at The Rude Boys".

What a start, and what a sound! Paul Fox's guitar was a joy to behold and Segs and Ruffy locked into their Rhythm, propelling those two classic singles along at breakneck speed. Rollins' guttural voice was perfectly suited to the material, and with his shaved head and barely controlled aggression, he certainly looked the part too. He self effacingly asked the crowd to sing along to help him and the audience responded enthusiastically. Next up was the menacing intro to "S.U.S." with that ominous bass line building to the slashing chords of the chorus which then fades into reggae to allow Fox's superb guitar lines to shine. "West One (Shine On Me)" was always a very underrated single, and tonight it gets a well deserved play and it sounds amazing. Vocalist Molara joins the band to sing The Ruts own reggae classic "Jah War", and you get the surreal sight of Rollins skanking away in the background covering on backing vocals. "Babylon's Burning", one of the classic Punk Rock singles, and one of my favourite Top Of The Pops moments, sees the crowd going crazy and as the song fades they start up a football terrace style chant of "Foxy, Foxy"...Paul is visibly moved. The full on onslaught of "Society" gives way to the singalong "In A Rut", which sees all the bands who appeared invade the stage to join in on the chorus. It's a chaotic but fun ending which gradually dissolves to leave Rollins, Segs, Ruffy and Paul Fox to take a well deserved bow and lap up the applause. There are mixed emotions of course but to see Paul Fox's huge smile, despite the pain he must have been in, as he stood in front of the crowd, was hugely inspiring. So, please buy the new compilation album and get out all those great Ruts records, they are a wonderful legacy for us to celebrate the unique talents of both Malcolm Owen and Paul Fox. Here's a few more of my photographs of some of the great bands who appeared at the July 16th 2007 gig.