I couldn't make it to the recent Scabies/James gig at the 100 Club, but I was in two minds anyway, maybe even a bit sceptical about it. How was it going to work? How were the drummer and guitarist going to pull this one off, not only with the absent, but still imposing presence of Captain Sensible and Dave Vanian looming over them, but with a girl singer taking the lead? Not only is "Damned, Damned, Damned" one of my all time favourite albums, but all those classic songs, with Vanian's somewhat Americanised drawl, they are all etched into my brain. So I was curious but not a little dubious too. However, after the 100 Club gig, I heard back from people that were there and it was all pretty much positive. Most of the reviews and comments were all glowing red hot and it did indeed seem that Scabies/James and Texas Terri had in fact pulled it off extremely well.


So I was really keen to see them play and made my way to the Retro in Westbourne Park, where an excellent set from The Priscillas warmed things up nicely. This was a special gig to celebrate Rat's birthday and also the 35th year of what was to be the first ever U.K. Punk Rock album, "Damned, Damned, Damned". The Damned were always ahead of the game, the first Punk single, first to tour in America and the first ever Punk album too. It's iconic custard pie splashed cover photo, heralded originally by those rather sinister adverts suggesting you should "Play It At Your Sister", The Damned's debut was a raw and chaotic statement of intent. That live, youthful energy was captured perfectly by producer Nick Lowe, and on first listen it felt almost as though the band were leaping out of the vinyl and bashing you around the head with their guitars and drumsticks. Back to the present, and I'm getting a breather outside the venue when I hear that familiar elastic bass riff to "Neat, Neat, Neat", I rush inside and make it down the front, a quick drum burst from Rat and then I'm almost blasted back outside again by the sheer power and volume of Brian James' guitar amp.

Texas Terri is a vivid blur of bright red hair and tattoos, she's been compared to a female Iggy Pop and it's not hard to see why. Terri was previously in sleaze trash rock outfits The Killer Clowns and The Stiff Ones, and has just released an album under the name Texas Terri Bomb! brilliantly titled, "Your Lips...My Ass!". That album features a guest appearance by Wayne Kramer of The MC5, one of The Damned's big favourites. Tonight, although they do play all the songs from the album, it isn't in strict track-listing order, for example a brilliant "Born To Kill" is followed by a storming run through of "You Take My Money" from the follow up album "Music For Pleasure". Hearing that makes you wonder why that second album is so maligned as it is a really great song. Maybe it was the production or the dynamic of the band changing, what with the the band expanding to a five piece with the addition of Lu Edmonds as second guitarist, incidentally now playing in the revamped Public Image Limited. I do think it's an album that deserves a second chance. Texas Terri is really getting into her stride as an unrelenting blast of high octane tracks follow, including "So Messed Up", "See Her Tonight" and an immense "Fish", with Rat's drumming blowing the cobwebs away. After seeing Rat recently drumming for the Members, where you get to appreciate the true skills of a drummer not usually noted for his subtlety. But, tonight we get the full on assault of the Punk Rock Keith Moon, crashing round his kit. Not a bad songwriter either, as two Rat penned numbers follow, the brilliant single "Stretcher Case Baby" and the brutal, short sharp shock of "Stab Yor Back".

Terri leaps off the stage and makes her way to the back of the room where she balances on a partition and belts out her vocals. I thought having an American singer would be strange but she makes it work so well, and really injects her own personality into the songs. Anyway, as I mentioned earlier, I always felt Vanian was singing with a bit of an American twang on the album. Plus, Brian James was always steeped in that Stooges/MC5 influence and did go on to work with The Dead Boys' Stiv Bators in Lords Of The New Church. My slight cynicism was quite literally, blown away, maybe because I'm standing right in front of Brian's amp, it is loud, he turns up the volume. Rat later tells me that Brian's volume can cause a bit of consternation for some venue's sound engineers, I can understand why, my ears were not to recover for the whole weekend. It's great to hear those familiar riffs though, Brian is a hugely underrated guitarist, he has that unique angular way of playing chords, and I find myself playing air guitar along to "I Fall". I look around, sheepishly hoping nobody noticed, but it was just an involuntary reaction, and I guess I wasn't the only one!


So, a short but ultimately satisfying set draws to a close with "I Feel Alright (1970)", and a quick happy birthday singalong to Rat. The band kick off the encores with their crazed cover of "Help!" with more energy and power than most young bands can seem to muster. The Bass player Austin, who has worked with Brian before, handles his role really well, taking a bit of a back seat next to Terri, Rat and Brian, he nevertheless deserves a big shout as he played brilliantly too, keeping it locked in as Rat and Brian bash away respectively on the Stooges style free-form wig-out "Alone". "Sick of Being Sick" is a great choice and of course there can only be one closing number, yes it's "New Rose". I was converted, it was a really fresh take on the reunion/come back and play a classic album scenario, and I suppose if you are going to recreate something like this, you might as well do it with a totally different slant. Unless you can pull off the ultimate trick, as the Buzzcocks did recently, and get all the original members back on board, then what's the point of roping in some karaoke tribute band style lookalike/soundalike. Yeah just do it different and do it well, just like they did tonight. So, all in all it worked perfectly, a great idea and I wouldn't be surprised if they couldn't make this into an interesting little side-project band with maybe some new material to come in the future? Now, that really would be something! 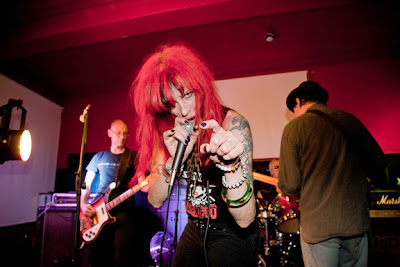 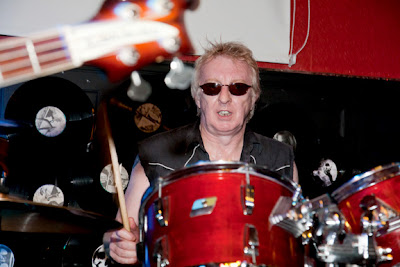 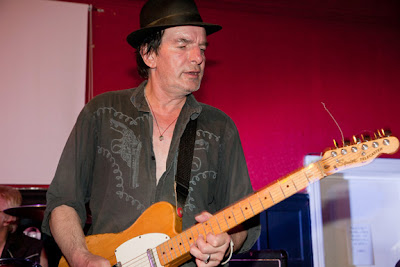 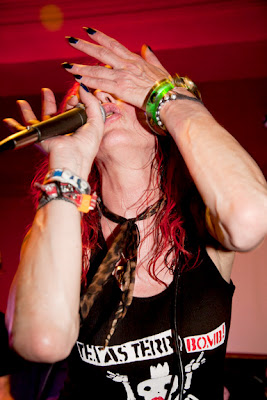 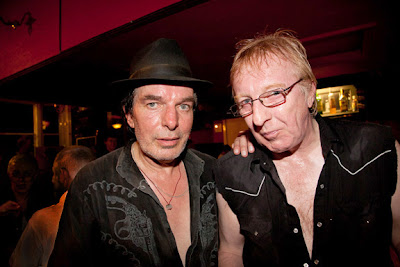