It's time to dig out your old Sony Walkmans and plug in your Ghetto Blasters as London's premier Garage Rock 'n' Rumble Bop Surf Punk band Oh! Gunquit have just released a cassette only E.P. entitled "Hot Cross Fun" on the US label Wiener Records which is a subsidiary of the super-cool Burger Records. The tape is strictly limited to just 90 copies and features eight tracks, a selection of four songs taken from their stunning Dirty Water Records released debut album "Eat Yuppies & Dance" along with four superb brand new songs produced by Detroit's Ghetto Recorders' Jim Diamond who has not only played bass with The Dirtbombs but produced and engineered recordings by many great artists from The White Stripes, The Fleshtones, The Mooney Suzuki to 60's Garage Rock legends, The Sonics. The new songs are really something special and in particular "Fireballs" and "Nomads of The Lost" are probably the best material the band has written so far. 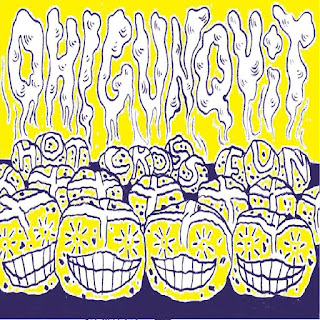 You can order "Hot Cross Fun" from the Oh! Gunquit Bandcamp site here. For more information on the band's upcoming live shows please check out their official Facebook page here. We'll be playing a track or two from the "Hot Cross Fun" cassette in the next episode of Retrosonic Podcast.