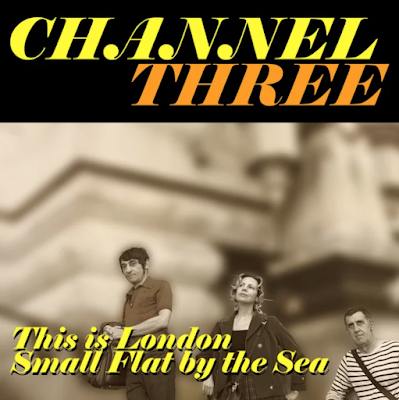 One of the things I miss about not being able to get out to gigs since the pandemic, is that every now and then you could be lucky enough to witness a very special musical moment that really sticks in the memory. One such happening occurred during a pleasant Sunday afternoon session at The Pelton Arms in Greenwich back in the summer of 2019. Serge Hoffman and Gabriela Giacoman from French Boutik were over on holiday from Paris and they teamed up with Bobby Tarlton from Dr Bird, Toby Kinder from Tiny Flaws and the DJ and percussionist Graham Lentz to entertain the crowd with a set of beautifully laid-back music. One of the undoubted highlights was Bobby's take on the French Boutik classic "Ici Paris" and in the true spirit of entente cordiale, he had re-written the lyrics as "This Is London" and turned it into a poignant, bittersweet tale of the gentrification of his beloved home-town. Luckily, I had my wits about me and recorded the performance, capturing it for posterity. I liked this version so much that during our special Retrosonic Podcast Episode with Serge, Gabriela and Bobby a few days after the show, I press-ganged the trio into playing it. Actually, looking back now I suppose that Podcast was the very first interview with what would be become Channel Three. For this is the name of the new collaboration that have just released a 7" vinyl single on Static Wax Records. It's a Double-A Side featuring Bobby's version of "This Is London" with Serge on guitars and haunting backing vocals from Gabriela and some lovely flute and organ floating effortlessly over this quite wonderful song. Then it's Gabriela's turn on the flip-side as she sings lead on her take of the evocative Dr Bird song "Small Flat By The Sea". If you've seen the trio play live together or listened to our Podcast for that matter, you can probably tell that the chemistry between them is so natural and warm, and this translates perfectly into the grooves of the new single. There's just one question left hanging though...could Channel Three treat us to a full length album one day in the future? On the evidence of this cracking debut single, I certainly hope so!
Here's a bit more info from Static Wax: "This collaboration combines the forces of Parisian "Pop Moderniste" style with a very English take on Mod Pop Soul to get results that should produce a rare point of agreement and delight ears from both sides of the channel. "This is London" combines a superb melody from French Boutik's Serge Hoffman, with lyrics decrying the gentrification of London from East End native son Bobby Tarlton (Dr Bird), featuring a melancholic flute, groovy organ, and a dance floor perfect rhythm provided by Brian Gosling on drums. "Small Flat By The Sea" sees French Boutik's Franco-American singer Gabriela Giacoman providing her hallmark vocals for a beautifully fresh and simple take on Bobby's original song, a Dr Bird favourite, originally released in 2018, once again ably assisted by Serge and Brian".
You can order the 7" Vinyl Single from Static Wax Records here and we'll be playing both sides in the next Retrosonic Podcast. Talking of which, don't forget the thoroughly entertaining special episode where I chat to Serge, Gabriela and Bobby about their influences, favourite songs and musical histories. Along the way we talk about the impact of Punk Rock and New Wave, the Mod Revival and Britpop - of political Pop songs, music genres, the differences between Paris and London's live music scenes and much more besides. Not only is there a pick of their own band's material but the episode is soundtracked by some great music from Tiny Flaws, The Stranglers, The Style Council, Charles Trenet, Nick Lowe, Popincourt, Billy Bragg, Etta James, The Kinks, Fay Hallam, Makin' Time, Supergrass, The Jam & The Prisoners and of course, the live debut of "This Is London"! Listen in below, or subscribe at Apple Podcasts or Spotify.
Retrosonic Podcast · French Boutik & Dr Bird
Posted by Retro Man at 16:18 No comments: