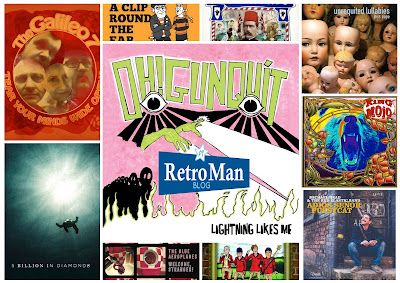 Groovy Uncle (featuring Suzi Chunk): "A Clip Round The Ear"

King Mojo: "Do Not Feed The Dancing Bear" 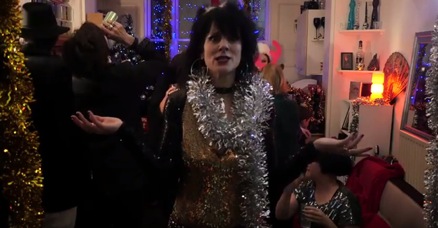 As I trudge through the snow to the Retroman offices this Christmas, weaving my way through groups of Victorian street urchins, I'll have a particular tune stuck in my mind. It will echo around my head as I struggle to type wearing gloves, and I'll be whistling it when I'm plucking up the courage to knock on the Editor's door to ask if his team of hard working writers might possibly be allowed to finish early on Christmas Eve. He'll say no of course, but who knows, maybe a nocturnal visit from the spectral forms of Roy Wood, Noddy Holder and Mariah Carey will change his mind. Yes folks, this year's Christmas ear-worm is "(I'm Going To My) Happy Place (For Christmas)" by The Mild Perils, a new project from front-woman of The Priscillas, Jenny Drag. It's a song that ticks all the boxes for a Christmas hit; catchy chorus, bells, festive video, more bells and even that 'footsteps crunching on snow' effect that you used to get, but this packs the additional punch of a bit of Yuletide realism; in short, it's a Christmas song for people who don't much like Christmas. This is the stuff that Christmas is made of but nobody normally sings about, with a full supporting cast of passive aggressive relatives and drunk guests, and a hoot of a video with Jenny resplendent in a backless catsuit and some tinsel. "(IGTM ) HP (FC)", as it shall henceforth be referred to, has exactly the right mix of wry humour and slightly festive chirpyness to bump it onto the list of Christmas songs I actually like, and I'll definitely be keeping an ear out for future offerings from The Mild Perils. So if, like me, you're not really too keen on the whole Christmas thing, tune out, tune in and go to your happy place. - Amy K-B Xmas 2017


You can download the song from The Mild Perils Bandcamp page here and find out more information on the band at their official Facebook page over here. Thanks to Amy for the review. Ho Ho Ho....

Email ThisBlogThis!Share to TwitterShare to FacebookShare to Pinterest
Labels: The Mild Perils, The Priscillas

Joy Division on The Streets of Stockport: Photographer Paul Slattery on his iconic 1979 photo session and Strawberry Studios Exhibition

In July 1979 I was working for Sounds magazine as a freelance photographer and I drove up to Strawberry Studios in Stockport with writer Dave McCullough to photograph Joy Division for an article in the mag. Dave had been listening to this demo tape very loudly in the Sounds office above Covent Garden tube station but I can’t say that I or anyone else in the office liked it at the time. Dave though had a sixth sense when it came to music, he was an absolute legend. In the evening we went to the Funhouse at The Mayflower to see Joy Division play along with The Distractions, The Fall and Ludus at a gig entitled "Stuff The Superstars". Tickets were £1.50 and I thought Joy Division were a load better live than on the demo tape though. You can still read Dave's original interview from Sounds magazine first published back in August 1979 here.

Roll on 37 years. In the late summer of 2016 Peter Wadsworth from the Stockport Museum got in touch with me about the Joy Division photo session I did on the streets of Stockport as he wanted some of the images for the upcoming exhibition "I Am In Love" about Strawberry Recording Studios. After the exhibition finishes my photographs will be on permanent display at the museum. This is a really excellent exhibition and has been hugely successful since its opening in January this year and if you still haven't been then you are lucky as it’s open until 29th January 2018. There are some great artefacts in the exhibition from Graham Gouldman and Martin Hannett from the studio made famous by 10cc and Joy Division among others. This was a golden age of British rock music and I was utterly privileged to be there.

Last month I was invited up to Stockport to give a talk about the Joy Division photo session at the Seven Miles Out Art Cafe. I was truly humbled by everyone letting me rattle on for about an hour or so, and to a packed crowd so I’m told. As a photographer you may hope that some of the photographs you take come out OK, but I’m truly touched at the love that this crowd showed for these Joy Division images.

Before the talk I went to visit Hopes Carr where I took some of the photographs - little has changed except some idiot at the council decided to cover what was a beautiful cobbled street with tarmac. I was gutted. Save your history Stockport! I hadn’t been in the centre of Stockport before and I must say that it has a very attractive little town centre with many period buildings and a covered market. It also has the Robinson’s Brewery where you can book a tour. It looks like a town trying to reinvent itself for the future and there is no doubt that the preserved building fabric of the town centre, the beautiful market, the really superb and eclectic Stockport Museum and the Seven Miles Out Art Cafe are all contributing to its revival.

Many thanks are due to both Peter Wadsworth who arranged the talk and to Rosemary and John Barrett who run this excellent Arts centre in Stockport. Thanks for the coffee Rosemary!
- Paul Slattery December 2017

Lee McFadden (musician with Cult Figures, Alternative TV etc.) interviewed Paul for the Joy Division Central web-site back in 2014 and he mentions the Stockport photo session and his first experience of seeing the band perform live.

Paul: It was one of those photoshoots where you felt the band really didn’t want to be choreographed. You just took them down to a place – “look over here”. I think the image they were – or Hooky was – trying to project – wasn’t a playful image. It reflected the music, which I thought at the time was melancholy. They’re not love songs. It was a different kind of vibe to what I was used to. I’d been taking pictures of punk, power-pop bands who project this kind of pop song vibe, so you get three guys and they’re all smiling. Joy Division was a different vibe. I just got them on the corner, saw how they interracted and took a few frames. Obviously in retrospect I wish I had taken about ten rolls of film (laughs).
Lee: You saw them at the Mayflower that night. People often remark on the marked difference between their live and studio sound. You’d heard “Unknown Pleasures” in the office – how did you react after seeing them live for the first time?

Paul: I thought they were amazing. I felt they really came alive. Hooky was there with his low-slung bass and I thought – “Well he’s learnt something from Paul Simonon anyway!” (laughs).

Lee: He’s admitted the same to me!

Paul: They were great. Ian Curtis had so much charisma. Live they were tremendous. There were some great bands on there – Ludus, The Fall, The Distractions were a really great pop band from Manchester, and Joy Division. I never knew whether Joy Division’s band of music would surpass the Distractions. I’d seen the Distractions a few times and I like that kind of pop music. But for me, the gig was very powerful and Ian Curtis was amazing live.