One of the very last gigs we went to back in February 2020, just before the onset of COVID and the impending troubles of the pandemic, was seeing a superb show by Michael Head & The Red Elastic Band at EartH in Hackney. It was one of only five shows we managed to attend in that terrible year which saw the live music scene completely decimated but I guess, if you’re going to be without live music for a while, what better way to wind down than with a Michael Head show. So, it was fitting that some eighteen months later, our very first post-lockdown venture to a proper sold-out, all standing, no social distancing gig would be to see Mick play again, this time back in his Liverpool home-town. Despite a worrying postponement of the original date, due to the lockdown deadline being extended, we finally turned up at the doors of a live music venue once again. We went along on the Saturday night; the second of two full-to-the-rafters shows at The Arts Club on Seel Street. I was a bit worried at first when I saw it was part of the O2 Academy group as I haven’t had good experiences with this chain in the past, but it really was a great venue, despite the two large columns blocking the view of the stage somewhat. The staff were friendly and our COVID vaccination ‘passports’ were checked on the door, but I must admit it did feel a bit uneasy at first as the crowd swelled around me. However, that trepidation was soon replaced by the overwhelming and much-missed feeling of excitement and anticipation that makes you remember just how special live music can be. And yes, this turned out to be very special indeed.

The band take the stage and as always, the self-effacing singer looks genuinely chuffed with the level of love and admiration pouring forth from the crowd. What follows is a masterclass in exceptional song-writing with a set that is crammed full of nuggets from all aspects of Mick’s musical career from The Pale Fountains, Shack, The Strands and then bang up-to-date with new and unreleased songs from the forthcoming Red Elastic Band album, the wittily titled “New Brighton Rock”. The Red Elastic Band has always had, if you pardon the terrible pun, a flexible line-up but now Mick seems to have settled on a quite magnificent band that do full justice to his songs and I think this was the best I’ve seen them play so far. Brothers Phil on drums and Danny on guitar are joined by their colleague Nathaniel from the impressive Liverpool based Indie-Pop band The Peach Fuzz, also on guitar. Nathaniel is actually The Peach Fuzz’s frontman so he has that extra touch of charisma that really adds something to The Red Elastic Band’s energetic live show. Supercool bassist Tom Powell grooves away at the back and there’s the crowd favourite, Martin Smith on trumpet. After seeing the Red Elastic Band play shows at seated venues like the Liverpool St. George’s Hall and then Union Chapel, EartH Hackney and the solo acoustic show at the Social in London, it was nice to see the band in a proper “Rock ‘n’ Roll” standing venue again and overall, I think it probably just about topped the similarly stunning show at the Islington Assembly Hall back in March 2016. (Click the highlighted venue names for previous features).

The set-list is in particular, a Shack fan’s dream especially if like me, "HMS Fable" is your favourite album as we are treated to a fair chunk of it. The immensely moving “Comedy” scores a direct hit, straight to the hearts of the adoring crowd. Then, there’s a storming full-on version of “Pull Together” and an almost transcendental “Natalie’s Party”, both quite superb. Mick’s sister Joanne takes the stage for the haunting “Daniella” and we also get a rare outing of “Oscar” with the crowd singing along to Martin Smith’s insistent trumpet riff.  Mick is capable of writing such heartfelt, emotionally charged music, there’s real beauty inside that tough looking Liverpudlian. I must confess to a lump in the throat and a tear in the eye on occasion, especially when the crowd sing along and shout their encouragement. Sometimes there are terrace chant sing-alongs in-between songs and I was pleasantly surprised to see a group of youngsters enthusiastically jumping about at the front of the stage, singing along to all the words. The kids are alright...!

There’s “Reach” from The Pale Fountains which sends the crowd into raptures and “The Prize” from the fantastic Michael Head & The Strands album. Only one recorded Red Elastic Band track gets an airing tonight and of course it just has to be the classic upbeat bounce of “Newby Street”. The new songs all sounded excellent and promise much from the new LP. “Grace and Eddie”, “Broken Beauty” and “American Kid” all captured the imagination. There’s an acoustic interlude with Mick delivering “As Long as I’ve Got You” and “Byrds Turn to Stone” from “Here’s Tom with The Weather” and then cranked-up versions of “Cup of Tea” and “Al’s Vacation” are both warmly received. However, it’s the mini-symphony of “Meant to Be” that is one of the night’s undoubted highlights, and I suddenly get ‘something in my eye’ during the Love-like trumpet refrain. The Psychedelic rocker “Up” almost lifts the roof off the Arts Club but the really pleasant surprise was the inclusion of “Sgt. Major” from that classic album “Waterpistol”. Hearing this was a cathartic experience, all the stress and hardships of the previous eighteen months of COVID, lockdown, bad news after bad news and the lack of live music – just seemed to disappear for the four minutes or so of this quite brilliant song. Tonight though, was much more than just a long-awaited return to seeing a gig, this was an experience that I won’t forget, this was emotional.

With sincere thanks to John Johnson for his photos. John has been documenting The Red Elastic Band from the start and is responsible for the superb cover to their debut album “Adios Señor Pussycat”. You can check out his official web-site here for limited edition prints and further examples of his photography. John also co-owns the great bar The Angus Tap & Grind at 83-85 Dale Street, Liverpool L2 2HT, we went along the evening before the gig and not only were they playing some fantastic music, we were also treated to an acoustic live set by a very good singer-songwriter. Finally, John has also started up a clothing range called Sound and Fury and one of their first ventures includes a limited-edition Mick Head T-Shirt which you can check out at the web-site here.

For more news on Michael Head & The Red Elastic Band please check out their official web-site, their Facebook page or their Instagram page. The Peach Fuzz are also well worth investigating at their official Facebook page here. There's also a fantastic Pale Fountains Facebook group here, which covers all of Mick's musical career. Thanks again to John Johnson and Ana for the pic of the set-list and "hello, wish you were there" to Mick's biggest fans out in Japan - Hiro, Rie, Kaz & Kurt! 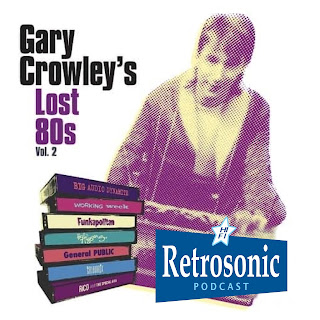 Last Sunday (August 1st) we went along to our favourite record store Sounds of The Suburbs in Ruislip to see Gary Crowley, the legendary DJ, TV and Radio show presenter, A&R man, schoolboy music journalist and former receptionist at the NME - give a talk and Q&A session to promote his excellent new compilation "Lost 80's Volume 2: 1980-1986". This has just been released via Demon Records as a beautifully packaged 65 track 4 CD deluxe edition all housed in a hardback cover including a lavishly illustrated booklet packed full of photos, notes and background information. The tracklist itself features an eclectic mix of hidden gems and unusual choices from some familiar and not-so familiar names. Gary's picks certainly highlight the diverse musical styles that made the early to mid-80's such an exciting time - from Post-Punk, jangly Indie-Pop, Ska and Reggae, Jazz and Soul to Rap and Electronica - this compilation covers all the bases. So, in the discussion you're about to hear, which was introduced by singer-songwriter John Donegan, Gary not only talks about the compilation itself but we were also treated to a thoroughly entertaining romp through his life in music. Along the way we find out who he interviewed for his school magazine (wearing his school uniform), which soon-to-be pop star he had a secret crush on, who were the nicest stars he's interviewed (and the worse...), who he wished he'd seen play live, why The Jam just shaded The Clash as his favourite band and why he dreams of a fifth ginger Beatle! To compliment the chat, the Podcast features clips of great music from Big Audio Dynamite, Altered Images, Style Council, Theatre of Hate, Working Week, Bananarama, Paul Blake & Blood Fire Posse and Leisure Process.

"Lost 80's Volume 2" is out now from all the usual outlets but it'll sound even better if you pop along to Ruislip and buy yourself a copy from Sounds of The Suburbs Records. You can listen or download directly below or subscribe to Retrosonic Podcast at Spotify, Apple Podcasts or Soundcloud.

This Podcast has been kindly authorised by Gary Crowley. Sincere thanks to Gary, Tony Smith at Sounds of The Suburbs and John Donegan. 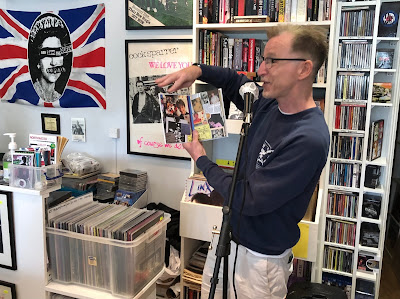 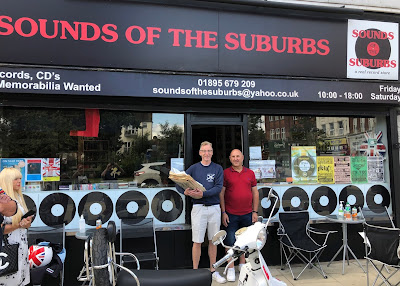