Independent publishing company First Third Books Ltd announces its latest photo book, "My Ramones - Danny Fields" - a limited edition hardback of rare and never before-seen photographs of the Ramones compiled in collaboration with Danny Fields, the band’s first manager. Chosen from his extensive personal archive, all the images of the four founding members of the Ramones were taken between 1975 – 1977 when Fields co-managed them with Linda Stein and had unique access to the band. The photos are accompanied with commentary and captions by Fields adding new perspective and insight to one of the best-known bands in recent music history. We are pleased to be able to show you a selection of some of the superb photos that will feature in the book.

Fields first saw the Ramones play at CBGBs in New York; after a 17 minute set, he met with the four founding members and told them that he wanted to be their manager. "I had to bribe them with $3,000 which they said they needed for a new set of drums. I went to Florida, asked my mother to lend me the money, came back with her cheque, and got the job. I photographed the band on tour, backstage, in the studio, walking around, meeting fans, seeing the sights and just checking things out" says Fields. Fields and his partner Linda Stein brought the band to London in July 1976, where their appearances at The Roundhouse and Dingwalls had an indelible influence on the emerging Punk scene in the UK.

"My Ramones - Danny Fields" is a unique document of the band’s early career that will be published on April 3rd 2016 as a hardback limited edition of 1,000 numbered books. Two options are available to pre-order now – a standard version of 700 copies retailing at £40 and a special edition of 300 copies which will include a previously unpublished signed and numbered 10”x7.5” print from Fields’ archive retailing at £70, sold exclusively via the First Third Books website.

All photographs copyright Danny Fields and used by courtesy of First Third Books. Check out the First Third web-site here for more information on this and previously released books. You can see our features on Sheila Rock's PUNK+ book in the Blog archive here. 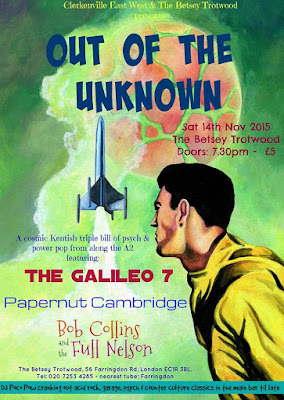 Clerkenville East-West - an occasional excursion into the heart of acid rock, cosmic Americana, British psych, post-punk and art rock - presents "Out of The Unknown" at The Betsey Trotwood, 56 Farringdon Road, London EC1R 3BL. A very Kentish affair featuring three exceptional purveyors of Psych and Power Pop goodness from the Medway (via Sidcup...). This special event will see the London debut of BOB COLLINS & THE FULL NELSON - led by the guitarist of cult '80s janglers The Dentists. Also appearing will be former Prisoners, Solar Flares and JTQ bassist Allan Crockford stepping centre stage with THE GALILEO 7's Sunshine Pop & Freakbeat. And then there is the always extraordinary Glam/Psychedelic pop collective PAPERNUT CAMBRIDGE - imagine Lou Reed and Marc Bolan hijacking the BBC Radiophonic Workshop...Running order on the three-way headliner will be decided on the night with the first band starting at 8.30pm SHARP in the basement.

For more information on the bands please check out their web-sites at the links below:

Email ThisBlogThis!Share to TwitterShare to FacebookShare to Pinterest
Labels: Allan Crockford, Bob Collins & The Full Nelson, Galileo 7, Graham Day And The Forefathers, Medway, The Dentists, The Prisoners, The Solarflares 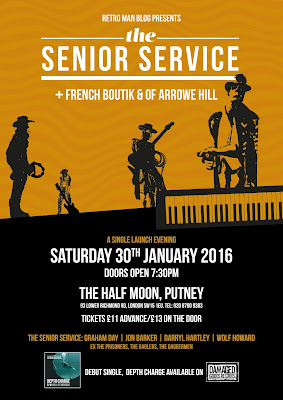 Retro Man Blog and Damaged Goods Records present the launch party for the debut single by The Senior Service at The Half Moon Putney on Saturday January 30th. The band will be making their first ever live appearance along with very special guests French Boutik and Of Arrowe Hill. Advance Tickets are only £11.00 and are available directly from The Half Moon here or £13.00 on the door. Our last two gigs with Graham Day sold out way in advance so we would recommend booking up quickly to avoid missing out on this exciting new chapter in Graham's musical career. 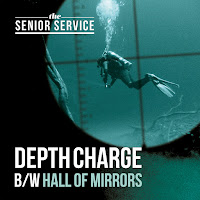 The Senior Service are the latest band to burst forth from the little clutch of towns known collectively as the Medway. However, they are no newcomers (as their name may suggest), for they have been in some of the biggest bands to have come from that area including The Prisoners, The James Taylor Quartet, The Mighty Caesars, Billy Childish & The CTMF, The Masonics, The Buff Medways and The SolarFlares amongst others. The Senior Service line-up consists of Jon Barker on the Hammond organ, Graham Day on the guitar, Darryl Hartley on the bass guitar and Wolf Howard on drums and percussion, close friends throughout they have always been into film themes and instrumental music. Amongst their influences are John Barry, Barry Grey, Booker T and the MG’s, Ennio Morricone and The Small Faces. “We got together to play instrumental covers because I happened to have bought a Hammond organ” says Jon, “but we dropped that idea before we played a note and quickly moved onto our own stuff.”


With a new single "Depth Charge" to be released on Damaged Goods records in January and an album to follow soon after, the recordings have an organic feel to them that only close, like-minded friends can achieve, so it feels like the time is just right for a fresh batch of exciting tunes played on antique instruments by young-minded lovers of Sixties instrumentals!

FRENCH BOUTIK
With touches of classic Motown, Burt Bacharach and Serge Gainsbourg, and of course those great French Sixties Yé-yé records, the Paris based French Boutik blend all of these influences together perfectly with their own up-to-date Modernist Pop twist.


OF ARROWE HILL
Formed in London at the end of the 1990s by Singer Songwriter Adam Easterbrook, Of Arrowe Hill are an English Hauntological rock group with an eclectic musical output spanning psychedelia, acid folk, country blues and lo-fi. In the current line-up Adam is joined by the rhythm section of Ian O’Sullivan and Jason Hobart, both ex-members of The Aardvarks.


You can read an exclusive interview with Graham Day about The Senior Service in our Blog feature here. Don't forget our special edition Retrosonic Podcast with The Forefathers where Graham, Wolf and Allan Crockford talk about their illustrious musical careers from The Prisoners and The Daggermen to their involvement with such Medway luminaries as James Taylor Quartet, Billy Childish and many more.


Advance Tickets for the launch party can be ordered on-line from The Half Moon here. "Depth Charge" can be pre-ordered from Damaged Goods here. Don't forget to check out Damaged Goods store where you will find a great selection of releases from Graham Day and Billy Childish. 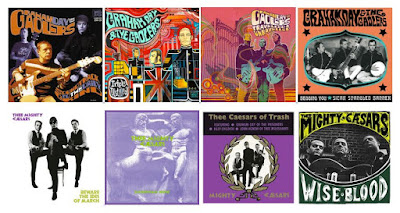 Here are some photos of Ebbot Lundberg & The Indigo Children from their gig at the excellent Garageprojektet venue in Hammenhög, Sweden on September 17th. Check out the Garageprojektet web-site here for news on their various projects and upcoming events. Previous gigs have included special appearances by Nina Persson from The Cardigans, Titiyo, Nicolai Dunger, Martin Hederos from The Soundtrack of Our Lives and Bob Hund amongst many others. 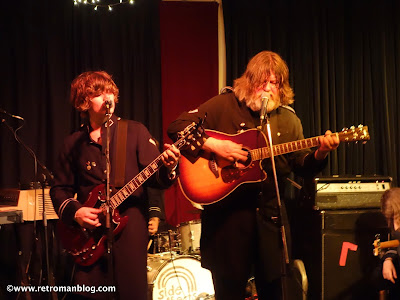 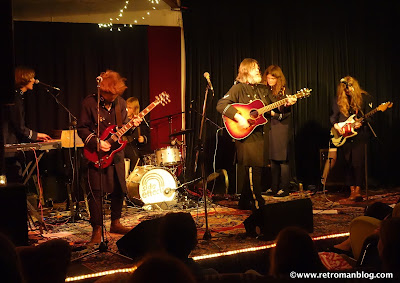 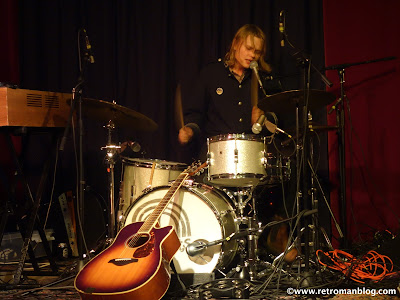 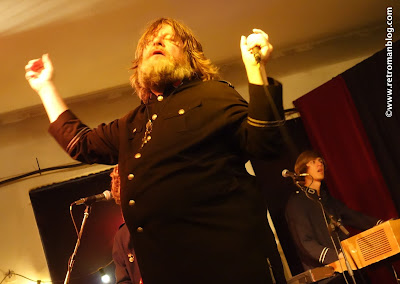 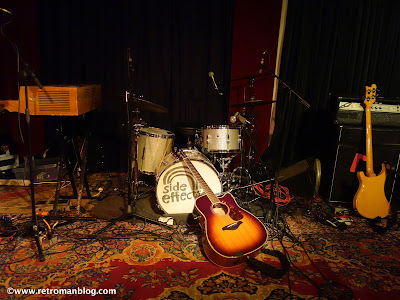 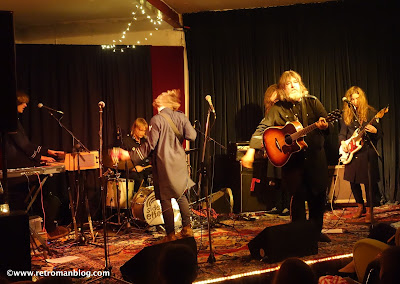 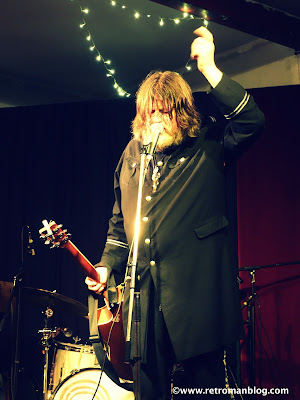 
Don't forget our Retrosonic Podcast special with Ebbot who talks to us about The Indigo Children and his plans for two brand new albums to be released sometime in early 2016.