Retro Song of The Day: Tammi Terrell - "What A Good Man He Is"


From the album "Irresistible"

The Len Price 3 put on another wonderful show on Friday at the Club Fandango in Kentish Town, surely they must be the best British live band around at the moment...Decked out in natty boating blazers, looking like residents of The Village in cult classic The Prisoner, they are not just numbers in the Garage Rock fraternity, they are definitely Number 1. They cannot be pushed, filed, stamped or indexed...(OK, enough with The Prisoner waffle...) - but they have their own sound that, although does encompass many classic references, still manages to sound fresh and exciting.
Probably in their favour is the keen ear for melody and the superb back-up vocal harmonising of drummer Neil Fromow. From behind his drumkit Neil actually bears a passing resemblance to Keith Moon and he's a damn fine drummer too, pushing the band through a quick-fire selection of power pop classics from all three of their albums.

The night's highlights for me this time round included "You Tell Lies" with it's irresistible "lalala" chorus and crunching riff.  "Shirley Crabtree" from first album "Chinese Burn", a witty tribute to the old pantomime wrestling, it mixes a terrace style "easy easy" chant with Beach Boys harmonies Then there is of course "Rentacrowd", which is probably the best example of the sheer class of their songwriting all distilled into two and half minutes of power pop genius.

The cover of "Comanche!" sees singer/guitarist Glenn Page leap from the stage and shoot around the audience and bassist Steve Huggins is hardly the archetypal, quiet bassist standing in the background as he is just as lively as Glenn, making the whole show a multi-coloured blur of energy.


They are a band that makes you smile, makes you dance, makes you play air guitar (and air drums...) and makes you fall in love with live music all over again. Your head will be crammed with hooks and melodies coming at you from all angles, so if you can deal with feeling like a teenager then get yourself down to the next Len Price 3 gig!
With thanks to Paul Slattery for the top photograph.
Posted by Retro Man at 21:12 No comments:

Slussens Pensionat - The most beautiful Rock'n'Roll venue ever...?

The Soundtrack of Our Lives will play two nights, tomorrow Friday May 20th and Saturday May 21st, at the beautiful Slussens Pensionat on the island of Orust, surely the most stunning setting for a Rock'n'Roll venue anywhere!

Situated on the island of Orust, which is about 30kms north of Gothenburg, the venue itself is in fact a renovated Hotel with conference centre and restaurant. Overlooking a stunning bay surrounded by cliffs and calm waters dotted with moored boats and yachts.


Run by Robert and Vibs Sohlberg, the Pensionat has become a must for some of Sweden's best musicians, including The Soundtrack of Our Lives, Nicolai Dunger and Freddie Wadling, to play acoustic sessions in an intimate setting. In fact Robert also often performs under the name Big Is Less and occasionally makes a guest appearance with the main band.

If you've got any other examples of stunning or unusual music venues then please share them in the comments. Please click here for more info on Slussens Pensionat.

Email ThisBlogThis!Share to TwitterShare to FacebookShare to Pinterest
Labels: Ebbot Lundberg, Slussens Pensionat, Sweden, The Soundtrack of Our Lives

Great news, The Len Price 3 are back in London! Next Friday, May 27th, they'll appear at Club Fandango's International Pop Overthrow Festival at the Bull & Gate in Kentish Town.
Posted by Retro Man at 20:07 No comments:

Email ThisBlogThis!Share to TwitterShare to FacebookShare to Pinterest
Labels: The Len Price 3

You know that horrible feeling when a friend says "Come and see my mate's band"?  The thought of enduring some awful cover band and having to grin and bear it and lie after the show about how much you'd enjoyed it. Well, luckily for me the "friend's mate's band" turned out to be The Jetsonics and there was no danger of me making my excuses after the show as they were damn good.

There have been some great E.P.s around recently from some bands that should be registering with the good old general public a bit more. The Jetsonics have just released one, The "Extended Player" E.P. is probably the best I've heard from a relatively unknown band for many a year, featuring four songs of supreme quality, each worthy of being an A-Side in their own right.

Starting off with "Burn! Burn! Burn!", a rousing "Roadrunner" style riff with a supremely catchy singalong chorus, then things change pace with second track, the reggae styled "Somewhere Else".  Drummer Dave Lombardi has an instinctive feel for reggae, something that comes over particularly well live and the song would not seem out of place on an old Ruts or Audioweb album.

"Amazing" is up next and is a real stand out song for me, it slams straight into a fast paced rocker with another superb chorus and some inspired guitar work from Sam Day. "Satisfied", the last track is underpinned with Adam Donovan's rolling bass riff and some glam rock power chords, Sam has a raw vocal style that gives the song a nice and sleazy feel and it's a great way to end an excellent E.P.

The Jetsonics to me are a classic good time rock'n'roll band,  a great reminder of the late 70's early 80's punk pop era of Buzzcocks and The Undertones and there's hints of Supergrass too with the catchy choruses and memorable riffs.

The good news is that if you're anywhere near West London on Friday May 20th you can catch them live and find out just how great they are at The Six Bells in Brentford High Street.

Check out these links for more info and to listen to some tracks, you'll be humming them to yourself for days to come...
https://www.facebook.com/#!/TheJetsonics
http://www.thejetsonics.com/

Email ThisBlogThis!Share to TwitterShare to FacebookShare to Pinterest
Labels: Paul Slattery, The Jetsonics

Absolutely storming E.P. of covers from Dublin band The Pacifics that's just bursting with energy including a brilliant version of "You Can't Judge a Book By Looking At The Cover". The band seems to have captured that vitality and raw soul of classic rocknroll perfectly, there's Hamburg-era Beatles, Thee Milkshakes, The Sonics, Chuck Berry all fighting to get out.

I haven't seen the band live yet but would jump at the chance as I can imagine it would be a great night out, so here's a press release from the band themselves:

The Doyens of Diddley, Archdukes of A-Major, Bards of the Beat, Kings of Klaaaang are here!
Dublin's premier Beat/R&B group The Pacifics release their debut EP on June 10th through their own Mistkäfer Records imprint. Made up of their favourite songs and recorded in glorious mono, The Pacifics Play Favourites serves as ther perfect introduction to the most exciting group in Ireland.

Renowned for their wild live shows and smart attire, The Pacifics have been playing their din up and down the country for the last year, leaving a trail of broken drum kits and fan club badge wearing fanatics in their wake.
Look out for The Pacifics vinyl debut later in the year, as well as a European tour.
Check out these links for more info and to hear the E.P.

Email ThisBlogThis!Share to TwitterShare to FacebookShare to Pinterest
Labels: The Pacifics

The Past Tense: "The Complicated E.P." 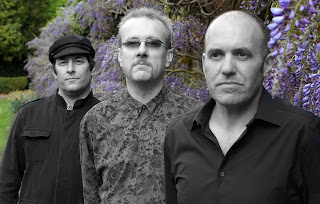 I caught The Past Tense supporting Len Price 3 at the Fiddler's Elbow and as I mentioned in that review, I kind of regretted not paying more attention or taking the opportunity to chat to the band. Mainly because it wasn't until later that I realized I couldn't get a few of their hooks and melodies out of my head and friends were talking about what a great warm-up to the LP3 they were, with their catchy garage psych songs. 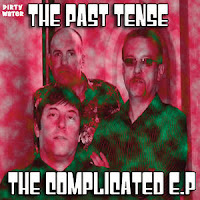 The band have three singles out so far, the latest being "The Complicated E.P." released on Dirty Water Records and available on iTunes and emusic. It's well worth checking out as it features three great tracks that conjure up images of The Yardbirds and The Pretty Things with their punchy RnB roots.
Another earlier single is "Feeling Bad"/"The Optimist", the first track is based around a catchy stabbing Hammond organ riff that gives it an almost Ska like rhythm and the raw vocals remind me of the young "Bricks & Mortar" era Weller. "The Optimist" is another melodic number with a ringing guitar riff and a great brass led ending. 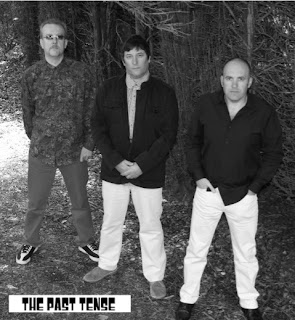 The other single is "Wolfman"which starts off with some dialogue from a Horror movie and then blood curdling screams lead into a crunching guitar riff. The second track "My Baby" is probably my favourite song of the band's that I've heard so far, and is one of the hooks that I still can't get out of my head. A staccato Wilko Johnson style guitar and an impossibly catchy chorus, you just can't beat it!
Great live band, I'll be sure to catch them again as soon as I can and this time give them the attention they deserve...more info here
Posted by Retro Man at 19:16 No comments:

Email ThisBlogThis!Share to TwitterShare to FacebookShare to Pinterest
Labels: The Past Tense

I'm a huge fan of Serge Gainsbourg's music and would rank the "Histoire de Melody Nelson" as one of my favourite concept albums. A trippy, mostly spoken word series of vignettes based on a chance encounter thanks to a car crash in his Rolls Royce, and romance, between Serge and a (worryingly) young lady, breathily voiced on the album by Jane Birkin.

I had to pay tribute at his house on the Rue de Verneuil in Paris, it's currently looked after by his daughter Charlotte and I heard that there were some ideas to open it up as a museum in the future.
The exterior is absolutely covered in graffiti of tributes and drawings of varying quality and it's even more striking considering the house is located in the rather posh Saint Germain area of Paris. It's easy to find from the Saint Germain des Pres Metro Station, or a short walk across the river from the Louvre.
I was really taken by a cartoon likeness of Serge and when I showed the photo to a comic book artist friend of mine he mentioned that it was actually drawn by Joann Sfar, a well known French cartoon artist. In fact Joann directed the superb fantasy biopic Serge Gainsbourg (Vie Heroique) which is well worth watching, particularly for the remarkable performance of Eric Elmosnino as Serge.
If you have any photos of rock & roll locations then please post them up in the comments, be good to see them. In the meantime here's a bit of Melody Nelson...
Posted by Retro Man at 14:53 2 comments:

Two For Today...Graham Day & The Gaolers.

Email ThisBlogThis!Share to TwitterShare to FacebookShare to Pinterest
Labels: Graham Day And The Gaolers 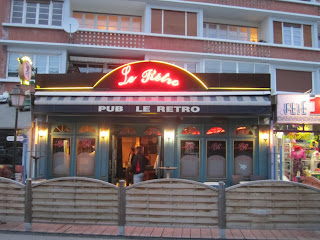 Just back from Normandy, came across this cool bar in Lisieux and had to take a snap...Cider and Calvados, lovely!
Posted by Retro Man at 20:40 No comments: