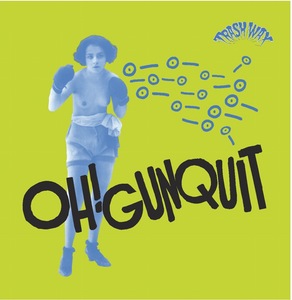 Hot on the heels of their excellent "Hot Cross Fun" cassette only E.P. Oh! Gunquit are unleashing more new material on us, this time in the shape of a lime green vinyl 7" single. The single will be released on Trash Wax Records and features two tracks "Nomads of The Lost" and "Walking The Street" and it will be issued in a limited edition of 100 copies in lime green vinyl before reverting to the more traditional black vinyl. You can order the single direct from Trash Wax Records here. 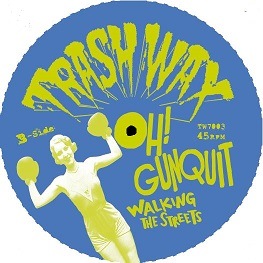 Here's the great new video for "Nomads of The Lost".


You can hear another new track from the "Hot Cross Fun" E.P. in Episode 25 of Retrosonic Podcast.

I'd like to take the opportunity to say a huge 'thank you' to all those who came along to our sold out Retro Man Blog Night with Graham Day & The Forefathers, The Len Price 3 and DJ Lee Grimshaw from the Spin-out Show, especially those of you that travelled some distance to be there. I'm sure all of you would agree that all the bands and Lee really put on a superb night's entertainment. Thanks to the Half Moon staff and to Eric from King Salami & The Cumberland 3 for the excellent gig poster and Glen Jordan for the superb video of the whole set which you can check out on YouTube here. When I went backstage before the show to see the Star Trek tunics hanging up I knew we were in for something special. The first time I saw The Prisoners was on the great Channel 4 music show The Tube way back in 1984 as part of a feature on the underground Garage Rock scene of the time along with The Milkshakes, The Tall Boys and The Sting Rays.

DJ Lee Grimshaw set the scene with a selection of great vinyl and got everyone warmed up for The Len Price 3 who put in another classic display with a set crammed with some rarely played oldies such as "Lai Ha Lam" and "Sailor's Sweetheart" along with some very promising new and unreleased numbers from their forthcoming album. The band are currently in the studio working on the album and of course we'll keep you updated on news of the planned release date as soon as possible.

It was Graham's birthday and as such The Forefathers had a few surprises up the sleeves of their Star Trek tunics. Jon Barker of The Senior Service, The Gaolers and The Daggermen was in the line-up and it was the first time The Forefathers had played with a Hammond organ. That meant we got treated to a lot of old Prisoners classics that rarely get played live by the band these days. Kicking off with the instrumental "Come To The Mushroom" from The Prisoners' debut album we then got served up a superb version of "The Drowning" followed by "Nobody Wants Your Love" both from the classic "Last Fourfathers" album. There was just the one Solarflares track tonight, the scorching instrumental "Lunar Girl", but The Forefathers have tended to concentrate more on the Solarflares material so I wasn't too disappointed especially with the treats that were coming up.

There was a brief pause when I presented Graham with a bottle of Jameson's and the crowd joined in an impromptu chorus of 'happy birthday to you' and the band slammed into The Gaolers "Pass That Whiskey" (not stage managed in the slightest...!) and "Just A Song". Then we got some prime Prisoners favourites including a stunning "Thinking of You (Broken Pieces)", "Whenever I'm Gone" and a mind-blowing version of "Hurricane" from "The WiserMizerDemelza" album.

Then we had a special guest appearance from The Senior Service, Darryl getting on stage to take over bass duties from Allan and they played "Bone Jacked" and the single "Depth Charge" to an eager and pleasantly surprised audience. Then there was another swift line-up change, Darryl passing the bass to Jon and we had a little tribute to The Daggermen with Allan taking over Dave Taylor's place on guitar and vocals. They played three tracks, two from the album "Dagger In My Mind" (which is surely due for a reissue) and "One More Letter" from their debut E.P. "Introducing The Daggermen".

Graham was down the front enjoying the short blast of The Daggermen's Garage Rock songs, singing along but was soon back on stage. to run through yet more great tracks from The Prisoners faultless back catalogue including rare outings for "Till The Morning Light" and "Far Away". There was a raucous run through of The Gaolers "Begging You" which sparked a one man stage diving (well stage jumping...) invasion by Andy from The Past Tense and the set wound up with a viciously powerful "Melanie". For the encore the band came back and played a brilliant "Reaching My Head" - the track that they famously played back on The Tube in those Star Trek outfits - and a medley of "I Drink The Ocean" and "Hush" and I'm sure I wasn't the only one in the crowd with a lump in my throat.

Here's a video of "Melanie" from the night, please check out our Retro Man YouTube channel for more original "up close and personal" videos from this and many other gigs.


Our next Retro Man Blog Night at The Half Moon Putney will be on Friday November 18th and we are very pleased to announce that it will be the showcase/launch party for The Masonics new album "Obermann Rides Again". We've sorted another superb supporting line-up of The Baron Four and The Beatpack and tickets are available to order in advance now for the bargain price of £11.50 from the Half Moon, either on-line here or by phone on 0208 780 9383. You can hear an exclusive track from The Masonics new album in Episode 25 of Retrosonic Podcast along with chat about the Forefathers gig and songs by The Senior Service, The Daggermen and The Dentists among others. Subscribe for free at iTunes or listen/download for free from our Soundcloud site.

Thanks to Paul Slattery for the excellent photos as always, for more pics check out the Retro Man Blog Facebook page here, hit "Like" and "Get Notifications" to keep up to date on future gig news.

Email ThisBlogThis!Share to TwitterShare to FacebookShare to Pinterest
Labels: Graham Day, Graham Day And The Forefathers, Graham Day And The Gaolers, Lee Grimshaw, The Daggermen, The Half Moon Putney, The Len Price 3, The Prisoners, The Senior Service
Newer Posts Older Posts Home
Subscribe to: Posts (Atom)