"Live at The Brixton Academy: A Riotous Life In The Music Business" by Simon Parkes 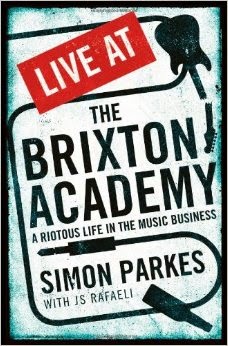 “Live at Brixton Academy” is a joyous and highly entertaining romp through the life of Simon Parkes, the man who bought the run-down Brixton Academy in 1982 for just one pound from the Watneys Brewery (there were conditions of course…) and turned it into one of London’s most popular venues. Parkes is, on the surface, a highly unlikely person to be thought of as an important player in the U.K.’s live music scene. Firstly, he doesn’t have those much-coveted working class credentials that seem so vital to so many people in the music industry. Born into a very wealthy family from rural Lincolnshire, he attended Gordonstoun school, Scotland’s equivalent to Eton College, where he was a class-mate of Prince Andrew. He was also born with only one arm due to the thalidomide drug scandal, so at first you do wonder how he was to emerge as a truly innovative maverick in an increasingly sterile music industry. However, first of all there’s no doubt that his background and family name did certainly help him in his business dealings with banks and business contacts. He certainly used his manners and “posh white boy” image to disarm (sometimes quite literally…!) and charm would-be adversaries and doubters, especially in the smouldering ghetto of Brixton, a virtual no-go area following the earlier rioting there. He also grew up with a no-nonsense attitude to his disability and from an early age was encouraged to get stuck in at sports and to defend himself from any verbal or physical attacks from bullies. In other words, this posh boy could look after himself, something that would certainly come in handy during his tenure at the Brixton Academy.

Along with the Academy he inherited a motley crew of experienced ex-roadies, sound engineers and fearsome security guards, a colourful collection of loyal individuals who at first seem more like a gang of mercenaries you might see in movies like “The Dirty Dozen” or the “Seven Samurai”. In fact you can also add “The Alamo” to that list of films, as there are some harrowing scenes where the Academy comes under siege from all angles – whether it is the small fry people trying to bunk in without paying to those who try forcing open doors to get in to far more serious incidents such as gas canisters being thrown into the lobby to being threatened at knife or gun point. There are run-ins with local Yardies and gangsters, Jamaican Reggae promoters and artist’s entourages and then there are the protection rackets, death threats from neo-Nazi gangs and riots to deal with. At one point Parkes is away at a wedding reception but is urgently summoned back to the Academy as a full scale riot is kicking off outside. He arrives amidst scenes of chaos and helps defend the venue dressed in full top hat and tails! There are scenes like this where the story plays out as a bit of a boys-own adventure, and whilst Parkes does not shirk from the dark side of the industry or the criminality he had to deal with, the book is very humorous and up-beat. It’s also very cinematic and in fact, I get the feeling that Parkes probably has one eye on turning this into a movie or TV programme; it would be a great watch that’s for sure. It’s not only the underworld fraternity that are a threat to the Academy, Parkes also has to deal with politicians and various jobsworths at the local council who he treats with as much contempt as he does the criminals. He has a memorable meeting with Margaret Thatcher and despite hosting many left wing rallies and benefit gigs – he soon discovers the hypocrisy in the Champagne Socialists of the Labour party at the time and even amongst the anarchist fringe who rip him off and run amok during “The Gathering of the 5,000” event put on by Crass associates Conflict.

At first, it's difficult to attract Rock bands to Brixton so he starts off promoting Reggae shows and soon builds up a reputation, booking in some of the top stars of the day. This evolves into his involvement with the early Rap and Hip-Hop scenes and culminates in the legendary double bill of The Beastie Boys and Run DMC. Slowly the Rock bands come and eventually he is putting on gigs for most of his musical heroes such as The Clash, Iggy Pop, David Bowie and The Rolling Stones. The Academy hosted U2 and the last ever London gig by The Smiths and the first reunion shows by Pixies. The Pogues held their raucous St Patrick’s Day gigs there and Primal Scream put on their wild all-night raves. There was Britpop, Grunge and Acid House and extravagant rave nights such as Westworld featuring full-size fairground rides; it was a case of anything goes. Eventually, Parkes finds himself losing interest as the quality of live music declines and the rise of X-Factor and manufactured studio based Pop reaches new heights. He has to deal with bankruptcy and sees plans for hosting a U.K. version of Lollapalooza and his own Grunge festival headlined by Nirvana, fall through. Club nights and Superstar DJ’s overtake live music and the long hours accompanied by the constant thud thud thud of dance music beats finally force him to realise he is just not enjoying his job any more. He decides it’s time to get out, and it is a bit disappointing that in the end, Parkes sells the Academy to one of those very same faceless corporations that he claimed to have despised. He agrees at first to stay on as a consultant but it’s the frustrating dealings with the Venue’s new owner’s lawyers and accountants and men in suits, with their total lack of understanding and passion for music that finally forces him to sever all ties with the Academy completely. 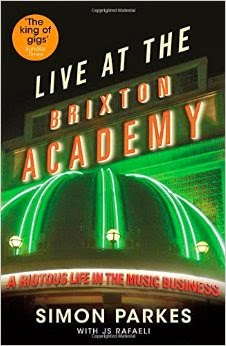 This book really struck a chord with me, not just because I have been involved in promoting gigs myself on a D.I.Y. basis with no previous experience - albeit on a much smaller level of course - but I finished reading it just as the news that The 12 Bar Club and the Buffalo Bar, two excellent small venues, were closing due to re-development. So, Simon Parkes story could be seen as a sobering tale of the continuing decline of London's live music scene, as well as sadly reminding us that the days of the true maverick are pretty much over. When I finished the book I was left with the lingering feeling that, just like football, big corporations are squeezing every ounce of creative spirit, individualism and character out of the music scene. In fact there are many parallels with the way football and music are run – stadiums and venues alike are now sponsored and named after companies, fans are treated with contempt as prices soar and the atmosphere gets ever more sterile. Over zealous jobsworth security guards are either forcing you to sit down and shut up or pushing you away from the front of the stage or telling you to get out as soon as the band leave the stage. When the latter starts to happen at reasonably small venues such as the god awful Islington Academy and 229 The Venue at gigs by bands that can hardly be described as famous, with a well behaved and good natured crowd, then you know things are getting somewhat ridiculous. So, old-school terraced football grounds are demolished to make way for yet another brand name supermarket or re-modelled into luxury flats. So, venues are either being re-named or stripped of their souls or being destroyed in the relentless surge of “gentrification” and property redevelopment for yet more shopping malls or coffee shop chains.

Of course this is very much Simon Parkes story and he really plays up to his naïve wide-eyed dreamer role which I think sometimes undermines the undoubted hard work and risks that he took. On occasion I was really hoping for another person's perspective, to see things from a different angle. Don’t expect much in the way of gossip or tales of salacious back-stage shenanigans, apart from the not-exactly-surprising news that Grace Jones is a bit of a diva, this is certainly no “Hammer of The Gods”. Parkes sticks to his Mr. Nice reputation and is very much discretion personified, in fact the book could also have been titled “what happens on the road stays on the road”. There’s no doubt this is a very honourable attitude in a very dishonourable industry, but it might be a little bit disappointing for some readers. So, I would thoroughly recommend this book to anyone with a passion for music, whether you have been to the Brixton Academy or not, it is a quite remarkable story. It will be interesting to see what Parkes will do next; the music scene certainly needs some mavericks like him more than ever.

You can order the book from Amazon and there's an interesting feature in The Guardian here.
Posted by Retro Man at 08:35 No comments: 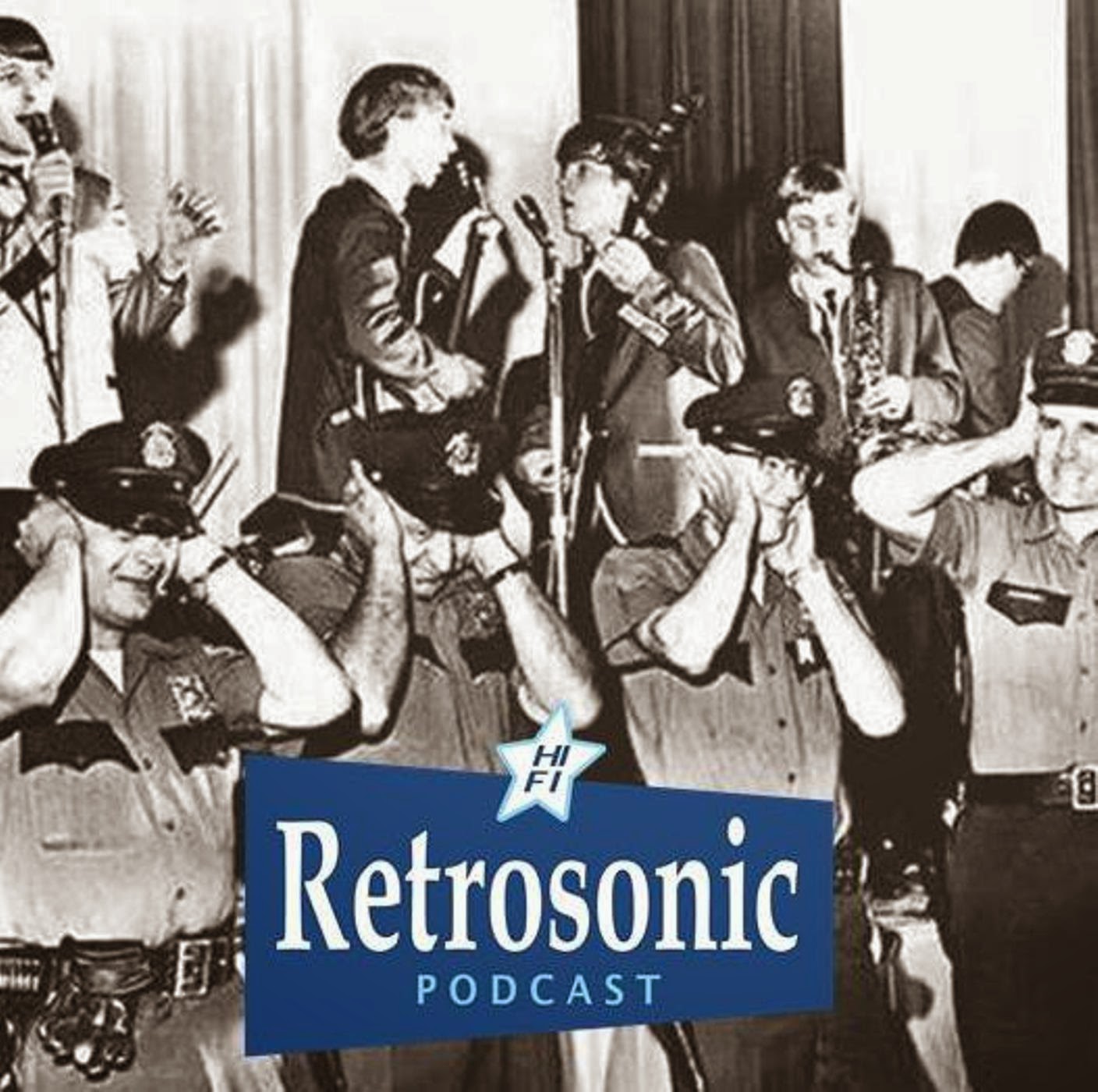 Retrosonic Episode 16: "Lost & Spaced Out" is out now and available to download for free from the Retrosonic Soundcloud site or you can now subscribe for free at the iTunes Store. Just to prove it's not all "retro" at Retrosonic, this episode features a recommended selection of all-new releases from contemporary bands that we have enjoyed over the past few months. So, we have a great pick of Mod, Soul, Punk, Psych and Garage Rock for you to enjoy. Please click the highlighted band names in the track-listing below to take you to each featured band's web-site or Facebook page to check out more info and news on upcoming gigs and releases.


The Mobbs "Get Your Hair Cut

Nervous Twitch "Somebody Else"

The Lemontops "Holding You Tight"

The Youth "I'll Call Your Bluff"

The Sound of Pop Art "Genevieve"

The Revox "Jumpin' Around"


The Teamsters "There's Always Someone"

Mark & The Clouds "Lost and Spaced Out" 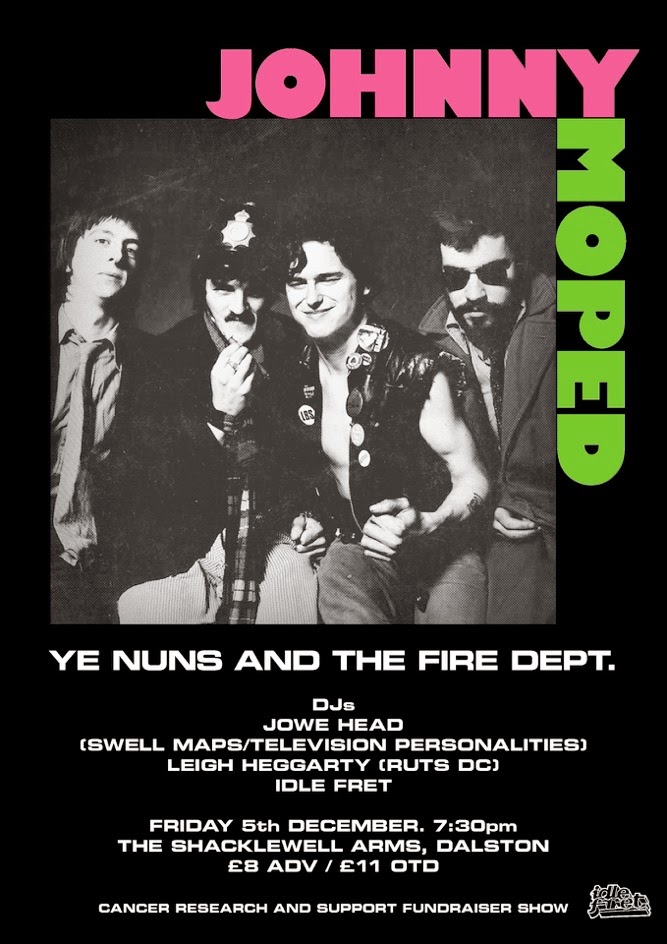 Idle Fret Records have assembled a top line-up for the cancer research and support fundraiser on December 05th at The Shacklewell Arms in Dalston. It features early Punk legends Johnny Moped, the all-female Monks tribute band Ye Nuns (featuring members of Curve, Mambo Taxi, Thee Headcoatees, Gay Dad, The A-Lines, Echobelly, The Phantom Pregnancies & The Priscillas) and The Fire Dept. who Billy Childish declared were the best British group of the 1990’s. There will also be DJ sets by Jowe Head from Swell Maps/Television Personalities and Leigh Heggarty from Ruts DC.
Tickets are just £8.00 in advance or £11.00 on the door, and all proceeds from the show will be donated to Cancer Research UK, Pancreatic Cancer UK and Macmillan.

Retro Man Blog readers can get a FREE download featuring Ye Nuns and The Fire Dept. via the following link: https://idlefret.bandcamp.com/album/idle-fret-free-download-december-2014

For more information on running times and to keep a check on any further announcements please visit the Event link at: https://www.facebook.com/events/731375506951730