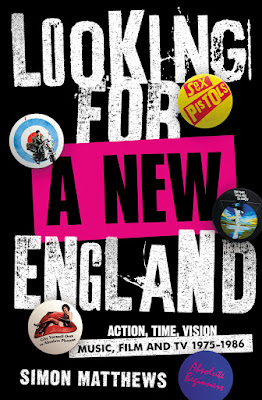 It’s always nice when someone actually takes the time to check a bit about the content of Retro Man Blog and what we’re about before contacting us with a view to feature or review something. So, I was particularly intrigued to hear from author Simon Matthews about his latest book “Looking for a New England. Action, Time, Vision: Music, Film and TV 1975-1986” published by Oldcastle Books. The title alone was enough to capture my attention, not just for managing to include two of my favourite songs from Billy Bragg and Alternative TV, but also the period covered coincided with what was for me at least, a seemingly golden age of music and cinema. This fascinating and evocative book is meticulously researched, covering over 100 movies and TV shows and written in a narrative style that puts everything into the social and political context of the times. This certainly adds a lot of welcome background information and helps you to understand the circumstances, reasons and more often than not, the difficulties behind the various productions. Although the main years covered are 1975-1986, there’s also explanations on the transition from the end of the Pop Culture boom of the Swinging 60’s (superbly covered in Simon’s previous book “Psychedelic Celluloid”) through the hardships faced by the British cinema industry right up to the Cool Britannia, Austin Powers and Britpop era of the mid to late ‘90’s, which somewhat ironically, ultimately harked back to the Swinging 60’s. So, I found that “Looking for a New England” really is the ideal Lockdown book as it’ll have you dusting down all those old VHS video tapes to revisit old favourites - or scouring YouTube to track down some of the more obscure or intriguing movies and TV shows so brilliantly and vividly brought back to life. The book is broken down into various chapters covering the relevant and important themes that informed many of the movies, TV and music of the times, including Art, Politics and Transgressive productions. There’s a particularly interesting chapter on the slew of Dystopian movies, which was probably as much to do with the prevailing fear of a nuclear war so rife at the time and the high-profile campaigning of CND. Of course, it’s probably the superb book-to-movie adaptations of George Orwell’s “1984” and Philip K. Dick’s “Blade Runner that spring to mind, but there’s also a reminder of Terry Gilliam’s equally stunning “Brazil”.

Then there’s a chapter that deals with the subject of race in the movies whether that be with the proliferation of films in the Kung-Fu genre or those dealing with the issues facing London’s Black communities in Ladbroke Grove and Brixton as seen in 1975’s “Pressure” starring Herbert Norville and “Black Joy”, released in 1977.  There’s interesting comment on movies and TV shows that tackled the Troubles in Northern Ireland with dramas such as “Harry’s Game”, “Cal” and “The Crying Game” as well as the story of the inspiring Punk scene that sprang from all the hardship covered in the documentary “Shellshock Rock”. Interesting trivia snippet: Derek Thompson, the Belfast born actor who starred in “Harry’s Game” but who’s probably best known from his role in Casualty, used to be in a late 60’s Folk trio called Odin’s People. Scottish movies are also covered such as 1985’s “Restless Natives” and two of my all-time favourite films, “Gregory’s Girl” starring Clare Grogan from Altered Images, and the classic “Local Hero” which features the immortal lines “Are you sure there are two L’s in dollar, Gideon?”, “Yes, and there are two G’s in bugger off!” The chapter on Comedy highlights Peter Cook and Dudley Moore, Alexei Sayle and “The Young Ones” and “Not the Nine O’Clock News” but of course, it’s dominated by the Monty Python gang with “Jabberwocky” and “The Life of Brian”. But it also highlights the importance of George Harrison and his Handmade Films production company in getting these and other independent British films made. Along the way, some other important people are featured such as Ken Russell and David Hemmings and somewhat surprisingly, Harold Wilson and his Eady Levy, which went towards encouraging movie production in the U.K. Here are some other featured movies and TV shows which might elicit a pang of nostalgia - “The Rocky Horror Picture Show”, “Scum”, “The Long Good Friday”, “Abigail’s Party”, “My Beautiful Laundrette” and “Rock Follies”. They just don’t make them like that anymore! 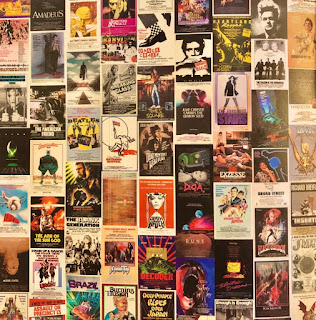 For me, however it’s the music related sections that really impress, citing the importance of “Slade In Flame” in finally shaking off that groovy multi-coloured Carnaby Street image and portraying the seedy and unglamorous side of the music business. There’s a whole chapter dedicated to David Bowie’s forays into theatre with “The Elephant Man” and the movies with “The Man Who Fell to Earth”, “Merry Christmas Mr. Lawrence” and “The Hunger” being the most successful. Simon doesn’t gloss over the less than successful movies though, he unravels the fiasco that was “Absolute Beginners” and doesn’t shirk from bringing up “Labyrinth”. There’s also plenty of attention given to the relevant original soundtrack music too. There are three whole chapters allocated to Punk Rock from its birth, flowering and death. It starts off by highlighting the importance of figures such as Dave Robinson who set up the Pub Rock circuit before going on to found the influential Stiff Records. Of course, John Peel and Malcolm McLaren are mentioned but it doesn’t forget the less celebrated people such as DJ Charlie Gillett who went onto manage Ian Dury. It’s sadly true that despite Punk being such a colourful, exciting and creative movement there really isn’t much in the way of visual documents capturing those early years. What there is however, is decidedly lo-fi and in keeping with the D.I.Y. “anyone can do it” philosophy I guess – so we have Don Letts’ scratchy but exciting “Punk Rock Movie” and “D.O.A.” by Lech Kowalski. Thank god then for the German filmmaker Wolfgang Büld who released his 16mm film “Punk in London” in 1977 featuring vital performances from The Clash, X-Ray Spex, The Lurkers, The Killjoys and The Jam among others. Büld also filmed The Adverts on tour in Germany for “Bored Teenagers” along with other must-see movies “Reggae in Babylon”, “Women in Rock” and “Punk and Its Aftershocks”. 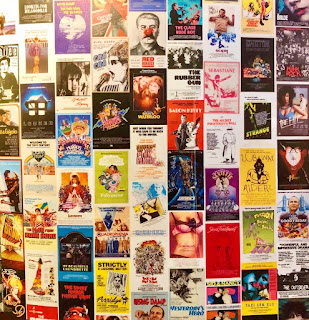 Of course, the peerless “Quadrophenia” is covered along with Derek Jarman’s “Jubilee” which featured performances from Toyah, Adam Ant and Jordan and then there’s The Clash’s “Rude Boy”. Somewhat surprisingly, very few musicians of the time would break through into “real” acting roles. Joe Strummer had a try with the Director Alex Cox’s “Straight to Hell” and “Walker”, there was Hazel O’Connor’s starring role in “Breaking Glass” and John Lydon appearing alongside Harvey Keitel in “Order of Death”. Actually, on the flipside, it’s some now familiar and highly respected actors who initially made their names with roles in music or related movies – of course most of the cast of Quadrophenia would go on to enjoy mainstream success but also Gary Oldman impressed with his portrayal of Sid Vicious in “Sid & Nancy” and Tim Roth was the menacing skinhead in “Made in Britain”. Interesting trivia snippet: Ray Winstone was the lead singer in the fictitious “band” featured in the movie “Ladies & Gentlemen, The Fabulous Stains” alongside Sex Pistols Steve Jones and Paul Cook and The Clash’s Paul Simonon. Then there’s the convoluted story of the making of “The Great Rock ‘n’ Roll Swindle” which is more interesting than the movie itself. There’s one obscurity that makes a fleeting appearance in the book and it might be worth trying to track down, “Pervirella” which is a low budget slice of Trash that starred some Medway Garage Rock names that might be familiar to Retro Man Blog regulars - Sexton Ming (as Queen Victoria), Bruce Brand and Billy Childish. The conclusion of the book looks at the way that many of the once fiercely independent and challenging movers and shakers became the new mainstream. Protest movements such as Red Wedge and Rock Against Racism faded out as Thatcherism tightened its grip. Original Punk bands such as The Damned and Siouxsie & The Banshees crossed over into the mainstream, I mean even The Fall hit the charts with “Hit the North”. Of course, the best example of this is how Richard Branson’s once small independent label Virgin rose to such worldwide business prominence. The commerciality of movies also rises with the opening of the first Multiplex cinema in 1986 and there’s the massively hyped blockbuster movies sweeping all before them. Nowadays, it’s Pay-Per-View and Subscription television channels who are challenging the cinema and movie industries with their lavish productions that often seem to equal the scale of a standard Hollywood blockbuster. Maybe this would make for an interesting subject for Simon to tackle in a future book! 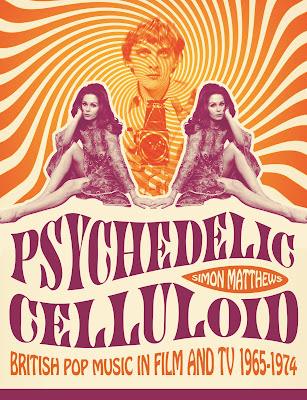 Simon Matthews has had a varied career including a spell running the British Transport Films documentary film library and several years singing in semi-professional rock groups. He has contributed articles on music, film and cultural history to Record Collector, Shindig! and Lobster magazines.You can order "Looking for a New England" from the publishers Oldcastle Books here. I can also thoroughly recommend Simon Matthews excellent "Psychedelic Celluloid: British Pop Music in Film & TV 1965-1974" which is also available from Oldcastle Books.